Germany’s shift toward alternative energy has seen wind parks pop up around the country. Not everyone wants a power plant in their own backyard. But in Schlalach, the wind park has become a part of town life. 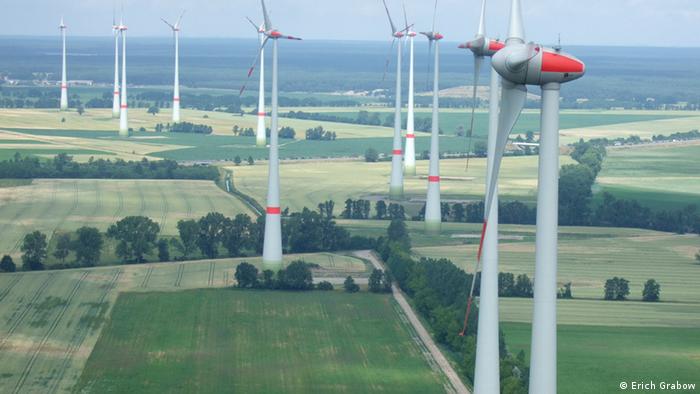 In Schlalach-Mühlenfließ, a small town in the German region of Brandenburg, 16 gigantic wind turbines stretch into the air. Every tower has huge, rotating blades and a height of close to 180 meters. Elsewhere in Germany, locals have complained that new wind parks are ruining the scenery. In Germany, critics often compare wind turbines to asparagus rising into the sky. There have been massive protests as local communities have tried stop turbine construction projects from going ahead. 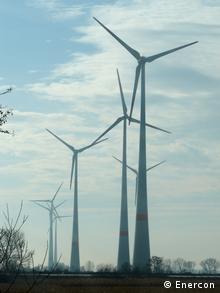 But that’s not the case in Schlalach-Mühlenfließ. Here, locals are proud of their wind park, which produces 60 times more electricity than the town of 1,000 inhabitants needs for its own purposes. "We are fine, there is hardly any tension here," says Peter Hahn, who lives in the town and co-founded a local group called ‘Wind Power in Schlalach’. He says that getting everyone to agree on the wind park took a lot of hard work.

Right at the beginning of the project, recalls Peter Hahn, they encountered their biggest challenge. "In 2002, this area here was declared suitable for wind energy projects," he says, pointing at vast fields that lie between the village and a motorway.

"About ten operating companies suddenly arrived. They wanted contracts with the people who owned the patches of land." But they realized that the best land for wind turbines wasn’t owned by large-scale farmers. The best plots belong to about 100 small farms in this region. "We had to find some sort of agreement," explains Hahn. 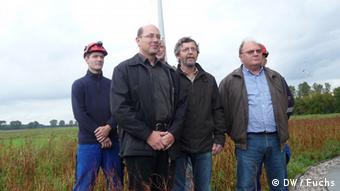 Members of Wind Power in Schlalach

That’s how the ‘Wind Power in Schlalach’ working group came to life. Anyone who wanted to discuss the pros and cons of building a wind park in Schlalach could join. "We asked all the owners not to sign any contracts. We went for a proper call for tenders instead," says Hahn.

Hartmut Höpfner, another member of the working group, approached wind park development companies. He received 20 replies and the group set to work looking for the most suitable candidate. "Half the developers wouldn’t have been able to go through with their plans if you look at the difficulties of such a project, such as electricity transfer from the turbines and the long years of getting clearance for it,” he explains. 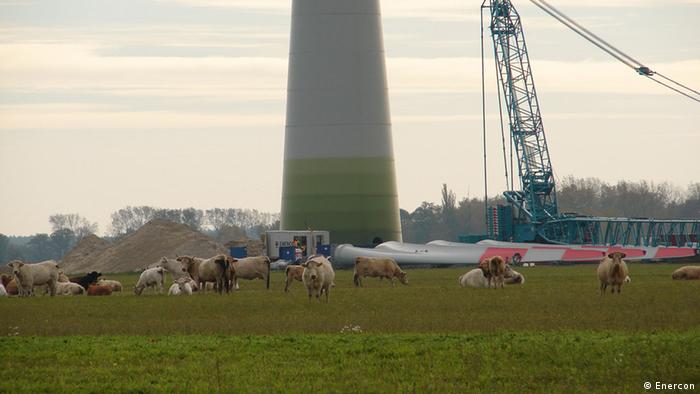 Ten of the firms which originally showed interest have since ceased to exist. "You have to carefully choose who you want to work with," is Hahn’s advice to anyone planning a similar project.

In the end, Schlalach opted for Enercon, the biggest manufacturer of wind power plants in Germany. Setting up 16 wind turbines between 2010 and 2011 cost some 62 million euros. Enercon founded a new subsidiary, in charge of both building and running the park. Vera Sibler, the project manager, came to visit the town every three months to meet with the wind power working group. Sibler says it was important "for the people to have the feeling that they were part of the process". 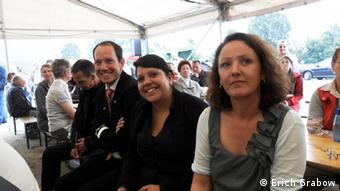 People in Schlalach played an important role in planning the wind park. They even decided on the wind turbine model together. "Our local car mechanic gave us an assessment of which plants are the best," says Hahn proudly. Project developer Sibler supports citizen participation. "It makes the work more strenuous," she says, "but you also get more satisfaction from it."

The real challenge for the Schlalach working group was convincing land owners that a wind park was a good idea. They developed a what is called a ‘pooled space model’. It guarantees that the leasing income from the wind turbine locations is distributed fairly between property owners. The operating company pays an annual leasing fee of around 18,000 euros for a plant with a 2 megawatt capacity. 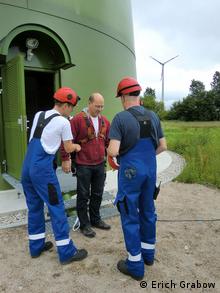 The people of Schlalach decided this sum wouldn’t be paid out to each individual, but put into a common fund. Over the coming years, the annual sum flowing into the fund will amount to more than 300,000 euros. Anyone owning a patch of land that belongs to the wind park receives a fixed share of the lease, in relation to the size of their property. The pooled space model guarantees that every single property owner receives an annual leasing income of about 3,000 euros.

But this clever system alone wouldn’t have guaranteed the success of the wind park. Not all people in Schlalach are property owners. So, Peter Hahn, Hartmut Höpfner and their working group tried to get those people on board who aren’t directly involved in the wind park but who have to look at buzzing rotor blades. 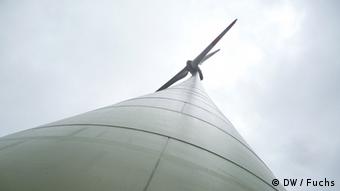 Schlalach will benefit from taxes generated by the park

“We made sure that the taxes are paid here in our community,” says Hahn. If all goes according to plan, during their 20 years’ running time, the 16 plants will account for some 3.3 billion euros of tax income. Regional companies are to take over the maintenance of the wind turbines and look after the surrounding fields they stand on.

Once the income is secured for both property owners and the community, the members of Wind Power in Schlalach have a dream for the future. With their own capital of 800,000 euros per wind turbine, they plan to buy into the operating company Enercon. That would guarantee even more direct income for this small town, where turbines are welcome.

German energy suppliers are demanding billions of euros in compensation for losses incurred by the phase-out of nuclear power, according to the daily Frankfurter Allgemeine Zeitung (FAZ). (13.06.2012)

As Germany moves from nuclear to renewable energy, a subsea power cable between Norway and Germany may help keep the lights on whenever nature isn't generating power. (26.06.2012)

Many renewable sources of power, such as wind and solar, cannot provide steady energy output. New storage options would solve one of renewable energy’s greatest challenges. (19.06.2012)

Keeping the power at home