The Polish Constitutional Tribunal found temporary injunctions on the country's judicial system by the EU's top court unconstitutional. Legal observers say this is a step toward undermining EU laws in the country. 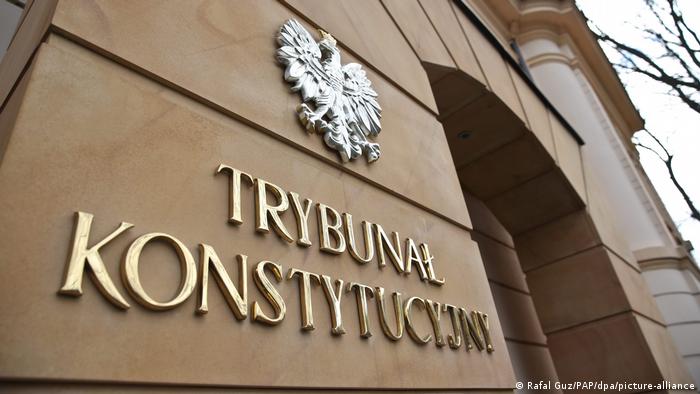 Poland on Wednesday went further on its opposition course to the EU with a ruling by its Constitutional Tribunal that declared temporary injunctions by the European Court of Justice (ECJ) incompatible with the Polish constitution.

The decision is seen by legal observers as a step toward weakening the power of EU laws in the country.

What was the ruling about?

The Tribunal ruled that a temporary injunction by the ECJ calling on Warsaw to suspend a panel it had created to discipline judges was in conflict with Poland's constitution and therefore not binding.

Judge Stanislaw Piotrowicz said the court's majority verdict was that EU measures on the "system, principles and procedures" of Polish courts were "not in line" with the constitution.

The panel oversees the appointment of top jurists. It also has the power to lift their immunity, allowing judges to face criminal proceedings or cuts to their salaries.

Shortly before the ruling, the deputy head of the ECJ told Poland to stop all activities of the panel immediately.

The ruling comes within the context of a larger row between the EU and Poland over the rule of law.

Wednesday's decision could be an indication of how the Tribunal's judges will soon rule on another issue at hand: the question of whether EU law takes primacy over Poland's constitution.

That decision was postponed to Thursday after hours of deliberation on Tuesday.

Fears of a Polish exit

The ruling will deepen fears within the bloc that Poland is moving further away not only from the EU's rule-of-law standards but even from the bloc itself.

"We fear that the Polish government is on the path to Polexit,'' Lenaers said, using the somewhat unwieldy contortion of the "Brexit" nickname that went on to become canon.

Opinion polls, however, show that most Poles are very much in favor of EU membership. Poland joined the bloc in 2004.

Why are the EU and Poland at odds over the rule of law?

Poland's ruling right-wing nationalist Law and Justice party (PiS) has carried out a number of reforms to the country's courts — changes the EU says give the country's justice minister too much power over judges.

The reforms, which came into force in February last year, also prevent judges from referring questions of law to the ECJ and have created a body that decides on judges' independence without reference to EU law.

The EU says the changes undermine the judiciary's independence, among other things by making it possible for the government to force some judges out or promote others on political grounds.

The PiS says its reforms are aimed only at making the judicial system more efficient and removing any remnants left over from the country's communist past.

Under Poland's new rules, the justice minister fired two regional court heads without explanation or right of appeal. The ECHR said this could harm the independence of the courts.