The European Court of Human Rights has ruled that crucifixes are acceptable in public school classrooms, dismissing claims that they violate the rights of non-Christian and atheist students. 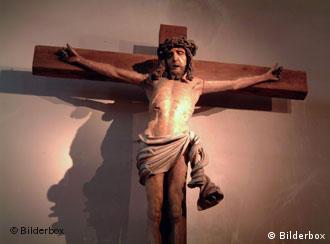 Schools in Italy have won back the right to display crucifixes

The European Court of Human Rights on Friday ruled that displaying crucifixes in classrooms does not breach the rights of non-Catholic families.

The case was brought to the court by an atheist mother whose two sons attend a public school in the Italian city of Abano Terme. The woman had argued that the refusal to remove the crucifix from classrooms was in violation of the secular principles that public schools are to uphold.

She had, without success, exhausted all levels of jurisdiction within Italy before taking the case to the European Court of Human Rights.

The Vatican on Friday hailed the court's decision as "historic." Robert Zollitsch, head of the German Bishops' Conference, said the court "had taken into account the large part of the Italian population" who - being overwhelmingly catholic - strongly oppose the idea of banning the crucifix from classrooms.

The lower chamber of the court ruled in favor of the woman in 2009, saying that displaying crucifixes was in breach of freedom of religion.

The initial verdict caused protests in Catholic circles in Italy and beyond. In a survey at the time, 84 percent of the population spoke out in favor of classroom crucifixes.

The Italian government subsequently refused to accept the 2009 decision and appealed the verdict.

In Friday's ruling, 15 judges of the 17-member ECHR's Grand Chamber ruled in favor of Italy, and two against.

The new verdict is binding on all 47 countries that are members of the Council of Europe, the continent's human rights watchdog.

The German constitution declares that there shall be no state church, but the government gives the main churches money and clerics give sermons on public television. Time to put a stop to that, says a new lobby group. (21.10.2010)

Aygül Özkan, the designated social minister in Lower Saxony who is set to be Germany's first Muslim minister of Turkish origin, has caused controversy by calling for a ban on crucifixes in state schools. (25.04.2010)