Too expensive to die in Hong Kong

Known for its unaffordable housing, Hong Kong is not only an expensive place to live, but also to die. As the city runs out of space to store cremated remains, finding a final resting place is becoming a costly affair. 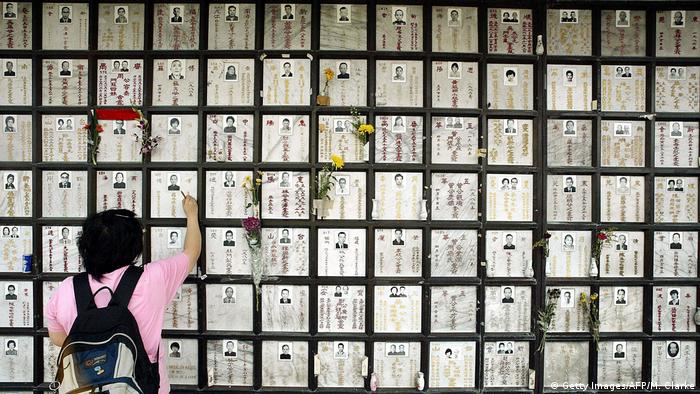 Despite having an area of just 1,100 square kilometers, Hong Kong is home to 7.3 million people. This makes the Asian financial hub one of the world's most densely populated and expensive cities to live in. In fact, Hong Kong retained its title of "world's least affordable city" for the eighth consecutive time this year.

According to Demographia, an American research institute, it will now take an average income household more than 19 years to buy a place to live. That too, if they don't pay taxes and have no other expenses.

It is not unusual for families to live in cramped "sub-divided" units where one flat is partitioned into several self-contained housing units. Also known as "coffin cubicles," these wooden boxes are no bigger than a twin-sized bed. These poor living conditions, which many find a stark contrast to the city's affluent metropolitan image, have made international headlines.

Space is so limited in Hong Kong that it is not only unaffordable for the living, but now also for the dead.

Hong Kong is facing a shortage of columbarium niches – spaces for storing urns that hold cremated remains of the deceased. Public columbarium niches cost around $330 (€283.72) apiece. But with roughly 43,000 deaths each year over the past decade, and with the provision of only 500 spaces annually, families have to wait at least four years for an urn niche.

At the end of 2016, there were around 133 private columbaria operating in Hong Kong, providing 365,000 urn niches. But many of them are located in residential areas, causing discontent among people living nearby.

"The funeral industry and death care services are regarded as taboo in traditional Chinese culture. Many residents are uncomfortable with living near columbaria," Pius Yum Kwok-tung, spokesperson of the Alliance for the Concern over Columbarium Policy, told DW.

"On top of that, during the Ching Ming and Chung Yang festivals, heavy traffic in these areas often causes residents great inconvenience," Yum added. The Ching Ming Festival (also known as 'Tomb-Sweeping Day') and the Chung Yang festival are two special days in the year when families gather to pay homage to their ancestors by cleaning their graves and making offerings.

To regulate the industry, the government established a new licensing scheme – the Private Columbaria Ordinance, which came into effect in June last year. It gave private columbarium operators nine months to apply for licenses that would only be granted to columbaria that meet requirements regarding land use, operations and ash disposal arrangements among others. These costs are expected to be levied on consumers, which in turn would increase niche prices.

Government records show that there are dozens of columbaria located in the densely populated residential area of Hung Hum. If these operators are not granted licenses, thousands of urns will need to be removed and relatives will have to look for new places to store the remains.

According to Hong Kong's Food and Health Bureau, the discrepancy between the demand and the supply of urn spaces will only accelerate over the next few decades. Around 1.1 million cremations are projected to take place in the next 20 years, while the government will only be able to provide 800,000 to 900,000 new urn spaces. This also depends on whether the public are agreeable to the sites selected for building public columbaria.

"While the government has gone all out to build new columbaria facilities to increase the supply of public niches, it is not realistic to expect the supply to catch up continuously with the rising demand," the bureau said in a paper.

Thus, the government has proposed to introduce a new allocation arrangement for public niches.

If the administration has its way, after an initial period of 20 years, applications for public niches must be renewed for a fee every 10 years. If the application for the niche is not renewed, the ashes will be removed and the niche will be reallocated for new ashes.

Lawmakers have criticized the new initiative calling it ineffective since results will only be seen in at least 20 years while the shortage of niches remains an imminent problem. Some are also upset by the idea that the deceased won't have a final resting place, which is important in Chinese culture.

Aware that to keep finding space to build new columbaria will not be a sustainable solution given Hong Kong's aging population, the government has also started to promote alternative burial methods. There are currently 11 Gardens of Remembrance run by the government that provide designated spaces where the public can scatter the ashes of their loved ones.

Hong Kong residents are also being encouraged to disperse ashes at sea, for which there are currently three designated spots too.

But apart from such "green burials," Yum also suggested that the government should provide more alternatives. "We hope the government will also promote gem beads (where relatives' ashes are transformed into beads that can be kept in glass containers) as an alternative way to store cremated ash and to mourn the dead."