Once Bayern Munich's most expensive signing, Corentin Tolisso is widely expected to soon leave on a free transfer. But the Frenchman scored again as Bayern brushed aside Hertha Berlin, and he may yet earn a new deal. 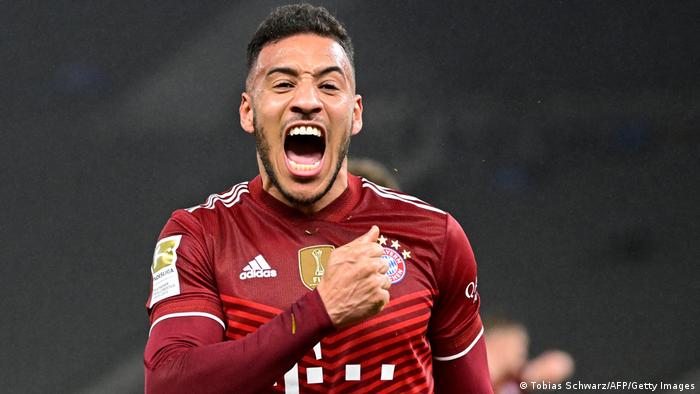 Corentin Tolisso has struggled with injuries since joining Bayern Munich

For the last few seasons, stringing together consecutive Bundesliga starts has proved close to impossible for Corentin Tolisso. But after his brave header opened the scoring as Bayern cruised to a win in Germany's capital, the French midfielder now has goals and starts in his last two league games.

Sunday's effort ensured Tolisso has scored more than one goal in a league season for the first time since the 2017-18 campaign, when he became club's record signing after joining from Lyon for an initial fee of €41.5 million. By the time he arrived late in the box to stoop and nod in Kingsley Coman's cross, Tolisso had already had a goal disallowed after starting in confident mood following a cracker in the win over Cologne last week.

Though capable of scoring (he got six league goals in his first season for Bayern and seven, five and eight in the previous three seasons for Lyon), that's not at the top of the list of qualities he's judged on. But the 27-year-old also looked comfortable at the base of midfield on Sunday: calm in possession, smart in timing his runs forward and dilligent enough defensively against a Hertha side who offered little until a late consolation.

Injuries and COVID-19 have limited Tolisso to 514 minutes in the Bundesliga this term but have also afforded him a chance of late, with Leon Goretzka and Joshua Kimmich among those to have missed games. But reduced minutes have been the story of Tolisso's time at Bayern. A cruciate ligament injury saw him miss almost the whole 2018-19 season and he's been unavailable for 33 games in the last two-and-a-half seasons with various ailments.

While such absences make any sort of consistency difficult, Tolisso has also been unable to make a significant impact when he has had chances in recent years, looking slightly off the pace and playing safe too often for a side whose opponents often sit deep, as Hertha did.

The explosive run for the opener suggested some confidence returning though and Thomas Müller's unmarked volley from a deep freekick allowed Julian Nagelsmann to rest Tolisso even before Leroy Sane and Serge Gnabry turned a comfortable win in to a rout. He'll be hard to drop for the visit of RB Leipzig on February 5.

Unlike Coman, who recently signed a new deal, and Niklas Süle, who Bayern seem keen to re-sign, the club's board don't seem too fussed about losing their record-breaker for nothing at the end of this season. But Julian Nagelsmann may have other ideas.

"He's a very good player who I think very highly of," Bayern's coach told Sport1 ahead of this game. "He played many good games recently. His future? He's old enough to decide. From a sporting perspective he's very important for us. And of course you'd like to continue working with your players."

It seems far-fetched to think that a player with Tolisso's injury record can be the lynchpin Bayern hoped for when they signed. But he may be starting to give the club second thoughts about casting him aside entirely.