Tokyo Olympics 1964: 'I was a better shot than the American soldiers'

The floods may have buried his medal, but the memories of the 1964 Tokyo Olympics remain. As the Games return to Japan, Hans Kaupmannsennecke recalls his unique journey from novice shooter to crack Olympic marksman. 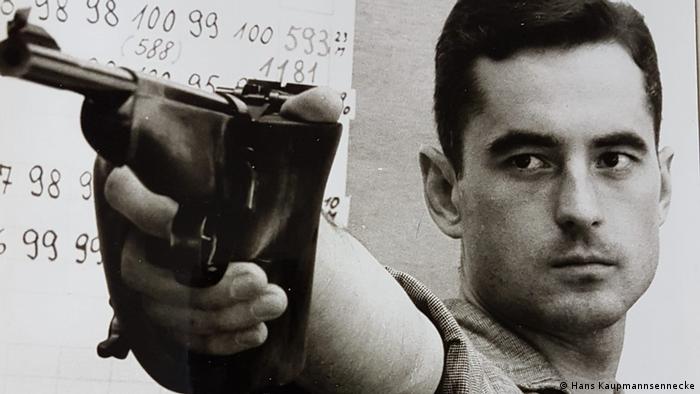 Who knows if the Olympic medal is still there, locked in the cupboard in the cellar? And what about the silk pennant with the Tokyo 1964 logo? And the Japanese stamp collection?

Hans Kaupmannsennecke doesn't know. He and his wife Renate were woken up in their flat in Bad Neuenahr-Ahrweiler in western Germany last week by the rapidly rising water levels, and they weren't the only ones.

The water tore down bridges and swept away cars, caravans and furniture like leaves. Streets disappeared under water; houses and buildings completely flooded. The ice cream shop opposite, which only opened last year, now resembles a car showroom full of filthy, ruined vehicles.

Still no water or electricity

"It sounded like cannon fire as the windowpanes of the shops and houses gave way," Hans tells DW. "Sights and images that you can barely explain or comprehend if you weren't there." 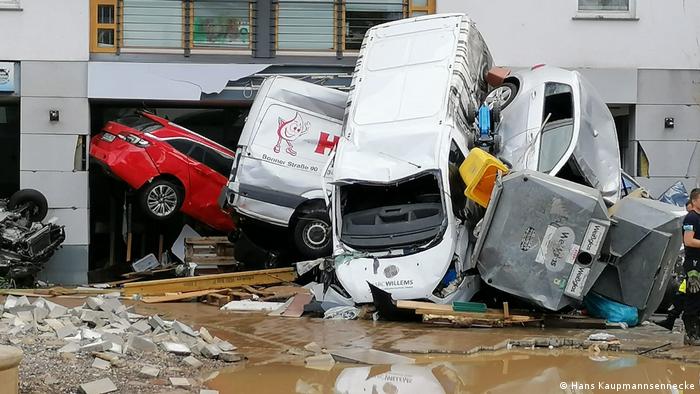 Many died in Bad Neuenahr-Ahrweiler. Of those who survived, most are still without power and water. Those who could, have fled. Hans and Renate, plus their daughter Claudia, are staying with their other daughter, Anja, in nearby Kerpen.

Their own flat on the fourth floor is unscathed. But everything in the cellar, objects and souvenirs from a long and eventful life, will soon have to be pulled from the mud and gathered together again. Most are probably lost forever.

"That would be very sad," the 84-year-old former German air force officer laments. "But the memories will remain."

Memories such as those of the Olympic Games in Tokyo in 1964.

"It was very hectic behind the scenes at the Opening Ceremony," recalls Hans, who was representing Germany as a marksman, although he'd only been introduced to the sport about a year earlier.

It had always been Hans' dream to be German champion — in something. Born in 1937, shortly before the outbreak of the second world war, Hans grew up in Hamburg and was a keen boxer, then he tried his hand at rowing.

After leaving school, he joined the air force in what was then West Germany as a pilot. Posted to different locations all over the country, he kept having to find a new sport: ice hockey, ice skating, cycling, fencing, motocross, parachuting — you name it, Hans tried it.

Shooting tin cans in a quarry

"One afternoon in spring 1963, a group of American army officers invited me to go shooting with them in a quarry," says Hans, who was nicknamed "Sixteen" by his friends due to his — even in Germany — unusually long surname. And there, for the first time, he shot at tin cans.

"It was fun!" he says. "And I was better at it than the Americans who were professional soldiers!"

Having enrolled in a shooting club in Detmold, Hans was sent on a series of air-rifle courses, where he took part in the discipline of free pistol for the first time. One of the oldest shooting disciplines, dating back to the 19th century, it is considered to demand the purest precision shooting among the pistol events — and the newbie won.

Little did Hans know, but it wasn't just any old competition; it was a national qualifying tournament.

That summer, the shooting rookie was part of the West German shooting team at the European Championships in Stockholm, Sweden, where they came third. 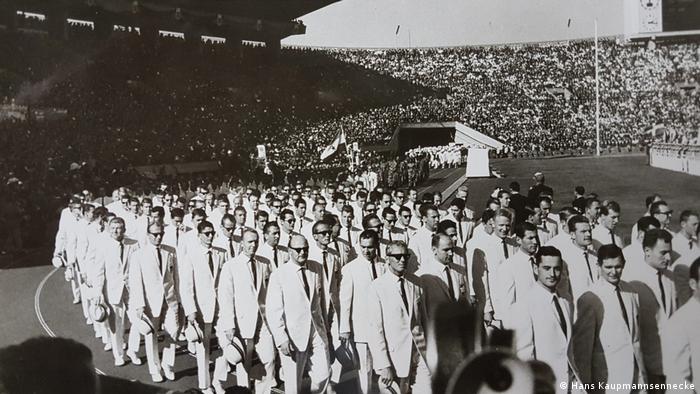 In the autumn, Hans' dream came true. "Sixteen" was "No. 1" at the national German championships, both with air rifle and pistol.

"That was an emotional moment," remembers Hans. "I can't control my smile when I think of that."

And it was about to get even better. In qualifying for the 1964 Tokyo Olympics, Hans had score 48 rings with his last five shots. He shot 49. Together with four pistol shooters from East Germany (it would be the last time that a united German team would compete at the Olympics for decades), he was in the team.

Meeting athletes from all over the world

"I hardly had any real contact with my teammates from the GDR [German Democratic Republic] because they were under constant surveillance," says Hans, who instead struck up a relationship with the Russian and American shooters.

In the Olympic Village, Hans shared a room with long-distance runner Harald Norpoth, who ended up a surprise silver medalist in the 5,000 meters. He also became friends with Wilfried Dietrich, the Olympic freestyle wrestling champion from Rome in 1960.

And his own competition? "Oh yeah, that," he sighs. "It started off well, but then my world collapsed."

More than 100 participants had two-and-a-half hours for 60 shots. All stood next to each other, firing simultaneously.

"It was going well, but then more and more spectators started gathering behind me and that threw me off my rhythm. I think it was the 28th shot when I fired too early, and, from then on, it was over. That's when it became obvious how inexperienced I was in competition."

In 1977, Kaupmannsennecke finished second in the world championships for military personnel.

Fifty-seven years on from 1964, when the Olympics return to Tokyo, there won't be any fans to distract the athletes, with spectators banned due to the pandemic.

Would Hans have made the podium under such circumstances? Who knows? All Hans knows now is that his souvenir medal from Tokyo '64, awarded to all competitors, is swimming around somewhere in his flooded cellar in Bad Neuenahr-Ahrweiler, or buried in the mud. Perhaps with his silk pennant and his Japanese stamps.

In a couple of weeks, when the Tokyo Olympics are over once again, Hans Kaupmannsennecke will embark on one final sporting challenge: finding his memories amid the devastation of the floods.