On a day of shocks in Tokyo, multi-Olympic champion Simone Biles withdrew from a team event citing mental health concerns. Questions remain as to whether she will be able to defend her four golds from 2016. 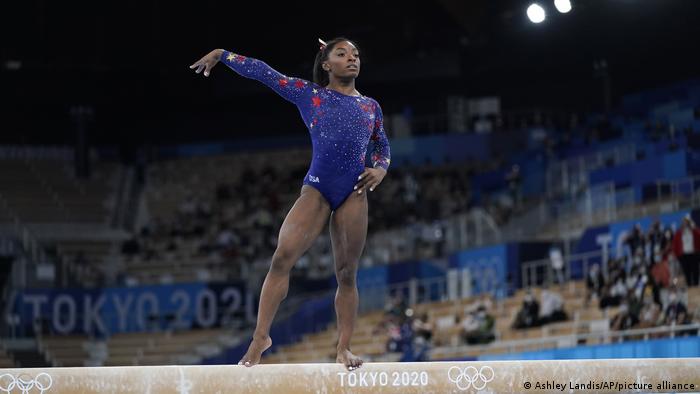 Multi-Olympic champion Simone Biles said "mental health" concerns had led to her withdrawing from the women's team final at the Tokyo Olympics on Tuesday.

"I have to do what's right for me and focus on my mental health and not jeopardize my health and my wellbeing," the American said after her team were beaten to the gold medal by the Russian quartet in her absence. "After the performance I did I just didn't want to go on."

The withdrawal raised the prospect of Biles not being able to defend the four gold medals she won at the Rio Games in 2016. However, afterwards she admitted that it was "a little injury to my pride" that forced her exit. The news comes on the same day that tennis star Naomi Osaka was knocked out of the Olympic tournament .

It was Osaka's own withdrawal from the French Open  last month which led to questions about whether enough was being done to help elite athletes cope with the pressures and obligations of competing at the highest level.

"I just think mental health is more prevalent in sports right now," said Biles. "We have to protect our minds and our bodies and not just go out and do what the world wants us to do. We're not just athletes, we're people at the end of the day and sometimes you just have to step back."

Naomi Osaka and mental health in sports: Is enough being done?

Biles grimaced after posting a low score by her standards on the vault, having appeared to hesitate mid-air over the type of twist she would perform. She left the competition floor with a team doctor soon after, and although she returned, her name was replaced on the start list before her next routine on the bars began.

Confirming Biles' withdrawal, USA Gymnastics said she had "withdrawn from the team final competition due to a medical issue." Despite only performing in one rotation of the final, Biles will still receive a silver medal.

The 24-year-old is widely considered to be the greatest gymnast of all time. However, she has apparently struggled since arriving in Japan, writing on social media that the "weight of the world" was on her shoulders and that the Olympics were "no joke."

Biles is next due to compete on Thursday, when she will aim to become the first woman in more than 50 years to retain an all-around title. Asked whether that was still possible, Biles concluded by saying "we're going to take it a day at a time and see what happens."