The four-time Grand Slam champion has pulled out of the tennis tournament citing mental health issues. Organizers had threatened to disqualify her for not attending press conferences. 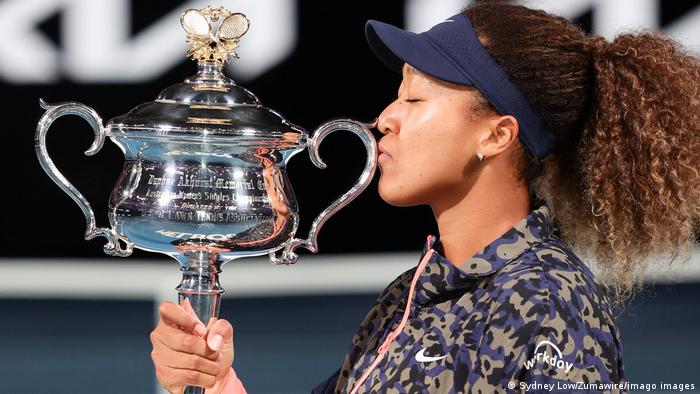 The tennis star Naomi Osaka announced over Twitter on Monday that she was pulling out of the French Open tournament in Paris, after being fined for not appearing in a postmatch news conference.

The four-time Grand Slam champion said in her statement on Twitter that she was withdrawing so that "everyone can get back to focusing on the tennis going on in Paris."

She also said that she had "suffered long bouts of depression" and that she gets "huge waves of anxiety" before speaking to the press.

Why was Osaka fined?

The 23-year-old, who is ranked second in the world, was fined $15,000 (€12,270) on Sunday after her first-round victory in the tournament because she refused to take part in the press conference after the match.

All four Grand Slam tournaments threatened further punishment, including disqualification or suspension after she said she was not planning on talking to the press during the tournament.

In her statement, Osaka said that she had been feeling "vulnerable and anxious" before the start of the championship and thought it better "to exercise self-care and skip the press conferences."

The Japanese born player who now resides in the US won her four Grand Slam championships on hard courts, but has never gone past the third round playing on the French Open's red clay.

She questioned the need for the postmatch meets with the press, saying "I do feel like the rules are quite outdated in parts and I wanted to highlight that."

How did the tennis world react?

Gilles Moretton, president of the Roland Garros — the official name for the French Open — published a statement expressing his sadness at the withdrawal.

"First and foremost we are sorry and sad for Naomi Osaka. The outcome of Naomi withdrawing from Roland Garros is unfortunate,'' he said.

"We wish her the best and the quickest possible recovery. And we look forward to having Naomi in our tournament next year.''

"The only thing I feel is that I feel for Naomi. I feel like I wish I could give her a hug because I know what it's like," Williams said following her first-round win at the French Open.

"Everyone is different and everyone handles things differently. You just have to let her handle it the way she wants to," she added.

Tennis great and 18-time Grand Slam champion Martina Navratilova also expressed her remorse that Osaka had pulled out of the competition.

"I am so sad about Naomi Osaka. I truly hope she will be okay," she said.

"As athletes we are taught to take care of our body, and perhaps the mental and emotional aspect gets short shrift," Navratilova added.

Rafael Nadal, 13-time French Open winner said that he respected Osaka's right to take a stance against the postmatch press conferences, but added that he considers talking to the press as part of the job.

Grand slam record champion Roger Federer has withdrawn from the French Open in Paris citing a need to rest following knee surgery. His last-16 opponent, Matteo Berrettini, has received a bye into the quarterfinal.