Titushki - the Ukrainian president′s hired strongmen | Europe | News and current affairs from around the continent | DW | 19.02.2014

The word "titushki" is not listed in a dictionary - but that's what people all over Ukraine call the sturdy young men in tracksuits who join forces with the police to fight anti-government protesters. 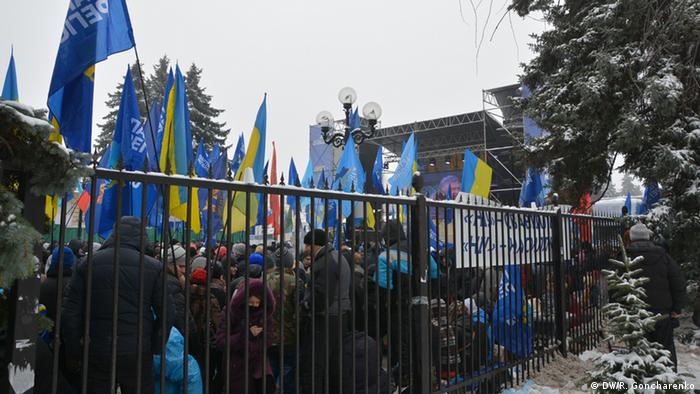 Thousands of supporters of Ukrainian President Viktor Yanukovych have been camping outin a park in Kyiv's government quarters for months,behind a fence andprotected by the police.

Opposition demonstrators stayed away from what has become known as the anti-Maidan - until Tuesday, when thousands of anti-government protesters tried to break through the police blockade around parliament.

A YouTube video shows demonstrators hurling rocks and Molotov cocktails at riot police, while shots and explosions are heard. Suddenly, a young man cries out: "Shame on the Titushki!" and the crowd joins in. The newly-coined word refers to young thugs in tracksuits who fight anti-government demonstrators alongside the police.

The titushki have an important role in the current political and social crisis in Ukraine. The word may not be listed in any dictionary, but Ukrainian media and politicians are increasingly using it, and so are foreign governments. 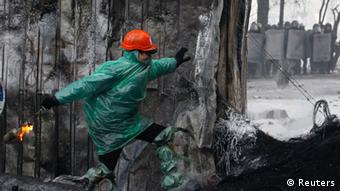 There are fears of prolonged violence after Tuesday's deadly clashes

In a travel alert last month, the US State Department warned US citizens of attacks by "young people locally known as titushki" and referred to titushki attacks on journalists and anti-government demonstrators in Kyiv and other cities.

Titushki is the plural form of the Ukrainian surname Titushko.

Vadim Titushko, a 20-year-old exponent of martial arts from the town of Bila Zerkwa near Kyiv, joined a pro-government demonstration in Kyiv with a group of friends on May 18, 2013. Titushko, dressed in a black track suit, assaulted two journalists, one of them a TV correspondent. He has since been handed a suspended sentence by a court.

The Ukrainians have named the sturdy young men hired by the government to assault peaceful demonstrations after him.

Titushki, who are active not just in Kyiv but throughout the country, have told anti-government demonstrators that they are paid the equivalent of 25 to 50 euros ($34 to 68) per day. When anti-government protesters seized several regional administrations buildings in January, hundreds of titushki helped the police attack and beat up the protesters.

Goons hired by the President? 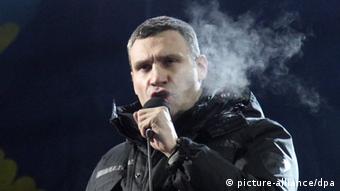 Vitali Klitschko urged residents not to give in to titushki provocation

According to estimates, there are thousands of titushki in Ukraine. They are brought into the cities, mainly to the capital Kyiv, with buses and trains. Ukrainian media report that most of them come from government strongholds in the east and south of the country.

There are indications that some of the titushki are criminals. UDAR opposition leader Vitali Klitschko points out that they work alongside the police. It's how the authorities function, he said in January: They "crack down on protests with the help of security forces and bandits."

Anti-government protesters are not cowed, however: they have literally chased down the titushki over the past weeks, and driven them away from the center of the city.

With violent clashes having left 25 dead in Ukraine, the German government's human rights commissioner, Christoph Strässer, tells DW that the EU has just days to act. (19.02.2014)

Russia has accused the West of political meddling in Ukraine. Moscow has been keeping a low profile as far as its neighbor is concerned - but it is clearly still pulling strings in the background. (18.02.2014)

Ukrainian police have moved in on a large opposition camp in Kyiv, pushing back anti-government protesters as violence in the capital has escalated. Opposition leaders have called for demonstrators to stand their ground. (18.02.2014)