Russia′s covert role in the Ukrainian crisis | World | Breaking news and perspectives from around the globe | DW | 18.02.2014

Russia has accused the West of political meddling in Ukraine. Moscow has been keeping a low profile as far as its neighbor is concerned - but it is clearly still pulling strings in the background. 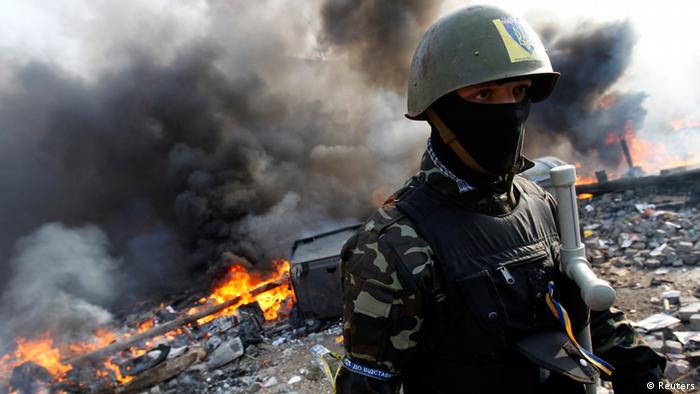 Moscow is blaming the West for the most recent escalation of violence in Kyiv.

Tuesday (18.02.2014) saw the worst clashes between demonstrators and the police since the protests began in November 2013, with reports of as many as nine fatalities. The Russian foreign ministry declared the violence a "direct result" of Western policies towards the Ukrainian opposition.

Until now, Moscow has - officially, at least - kept a low profile where Ukraine was concerned. No leading Russian politicians have visited Kyiv. President Vladimir Putin and his prime minister, Dmitri Medvedev, have not issued daily appeals to the warring parties in the Ukraine calling for dialogue. In other words, the Russians have avoided doing what representatives of the European Union and the United States have done.

Moscow takes a critical view of Western politicians' trips to Kyiv. "It doesn't seem to me to be either correct or polite to be sending emissaries on a daily basis," said the Russian Foreign Minister Sergey Lavrov at the most recent meeting with his German counterpart Frank-Walter Steinmeier in Moscow. President Putin said in January that Russia would "never meddle" in Ukraine, referring in the first instance to handing out advice from abroad. 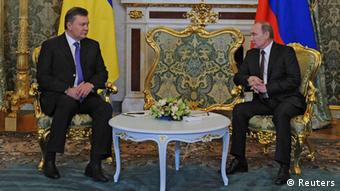 In truth, however, observers report that Moscow is more active in Ukraine than it has been for 20 years. It just exerts its influence less publicly than the Europeans.

This Russian activity takes place on several levels. For a start, Russian leaders prefer to speak with Ukrainian politicians on home ground. That could be seen when the Ukrainian president Viktor Yanukovych met Vladimir Putin at the opening of the Winter Olympics in Sochi in early February. Nothing is known about the outcome of their talks. In January, a number of Ukrainian ministers visited Moscow, and the Ukrainian foreign minister is due to fly to Russia at the end of February.

At the end of January, President Yanukovych named Andriy Klyuyev as his new chief of staff. It's a move that some Ukrainian media and Western experts believe has strengthened Russian influence over Ukrainian politics. According to the Swedish Ukraine expert Anders Aslund, Klyuyev is very close to the Kremlin. Asland told the Ukrainian online newspaper "Ukrainska Pravda" that the new Ukrainian chief of staff is working directly with Vladislav Surkov, Putin's advisor on Russian relations with the Commonwealth of Independent States (former Soviet republics).

Another Kremlin advisor, Sergei Glazyev, has also been very active in recent months in matters related to Ukraine. Glazyev is responsible for integration in the post-Soviet region. In an interview, he called - indirectly - on the Ukrainian leadership to use violence against the opposition demonstrators.

Officially, there is no information available about Klyuyev's relations with the Kremlin. However, he is said to have a Ukrainian ally in Viktor Medvedchuk, who was the presidential chief of staff under Leonid Kuchma. Medvedchuk is a close personal friend of Vladimir Putin and the leader, in Ukraine, of the Ukrainian Choice movement, which campaigns for closer ties between Ukraine and Russia.

The German political scientist Andreas Umland, who lives in Kyiv, also draws attention to Medvedchuk. "His major project is said to have been agreed with the Kremlin, and possibly also financed by Russia," Umland told DW.

Crimea is a Ukrainian peninsula jutting into the Black Sea

The increased influence of Russia is particularly apparent in the Autonomous Republic of Crimea in the south of Ukraine. Here, ethnic Russians constitute two thirds of the population. Furthermore, the Russian Black Sea fleet is stationed in Sevastopol. A few days ago, the non-governmental organization Sevastopol Coordination Committee published a declaration that Crimea might secede from Ukraine, were there to be what they consider a coup in Kyiv. Russian parliamentarian and leader of the Fatherland Party Aleksey Zhuravlyov traveled to Crimea to start up a "Slavic anti-fascist front" there - aimed at combating the opposition demonstrators in Kyiv, whom he considers "fascists."

In its latest edition, the Kyiv weekly paper "Dzerkalo Tyzhnia" writes that Russia has opened up a "Crimean front." The paper fears an escalation of the conflict, as happened in Georgia in 2008. It warns that Crimea might eventually separate from Ukraine, and that the danger of this is greater than it has been for years. Against this backdrop, Crimean politicians are traveling increasingly frequently for talks in Moscow. On February 20, for example, the head of the Crimean parliament, Vladimir Konstantinov, is flying to Russia.

However, the German political scientist Christian Wipperfürth, who works for, among others, the German Council on Foreign Relations (DGAP) in Berlin, believes that fears of Crimean secession are exaggerated. "No one is questioning Ukraine's territorial integrity," he told DW. He explained that Russia was not interested in splitting up Ukraine, as this could set an example for other post-Soviet countries.

The Russian media is also playing a major role in Ukraine. A survey has indicated that more than 22 percent of Ukrainians watch Russian television to get information about events in their own country. Russian broadcasters are speaking of an "attempted coup" in Ukraine, instigated by the West.

"Russia has never devoted as much air time to Ukraine as it is now," said Diana Duzyk from the Kyiv media magazine "Telekritika." She told DW, "It shows that it is strategically important for Russia to keep Ukraine in its sphere of interest."

And Russia is expected to exert even more influence over the Ukrainian media in the coming weeks. Another news channel is to start broadcasting in Kyiv and other Ukrainian cities: Its program directors are from Russia.