Top US officials say that Washington is no longer prioritizing the ouster of Syrian President Assad. The news came as Secretary of State Tillerson was unable to resolve disputes with the US ally Turkey while in Istanbul. 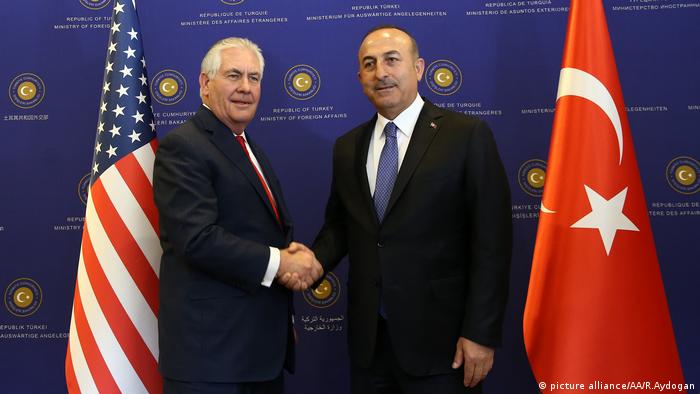 The United States and Turkey were unable to make any headway in their dispute over the role of Kurdish forces in the fight against "Islamic State" (IS) on Thursday during Secretary of State Rex Tillerson's first visit to Ankara.

"Let me be frank: These are not easy decisions," Tillerson said at a joint press conference with his Turkish counterpart, Mevlut Cavusoglu.

Tense relations between the two allies stem from a US decision to use Kurdish militias to help combat IS terrorists in Syria. Turkey considers the forces, known as the YPG, to be the armed wing of the Kurdistan Workers' Party, which is banned as a terrorist organization by Ankara. The Turkish government has long been engaged in conflict with Kurdish separatists.

Turkey has argued that the US ought to ally itself only with Turkish forces in Syria, but Washington has said the Kurds have proven themselves to be the most effective fighters against IS targets. The row has taken on added urgency in recent days as the US-led coalition prepares a new offensive to retake the city of Raqqa, the de facto IS "capital."

The decision has "negatively affected the Turkish people's sentiments towards the United States," said Cavusoglu.

Tillerson said the pair had discussed "a number of options and alternatives" for cooperation, but could come to no agreement. He did, however, hail Turkey as a "key partner" in the coalition against the jihadis.

Assad's future up to Syrian people

Another key point of the press conference was the US diplomat's comments on Syrian President Bashar al-Assad – the closest indicator to date on the Trump administration's attitude towards Damascus.

"I think the... longer-term status of President Assad will be decided by the Syrian people," Tillerson told reporters. This was a turning point from the government of President Barack Obama, which regarded Assad's removal as a key point of any future peace in Syria.

Washington's envoy to the United Nations, Nikki Haley, reiterated this position on Thursday when she said that the government had to prioritize defeating IS over forcing Assad to step down. "Our priority is no longer to sit and focus on getting Assad out," Haley said.

Before leaving Turkey, Tillerson also met with President Recep Tayyip Erdogan for over two hours as well as Prime Minister Binali Yildirim. The famously media-shy diplomat has not made any public comments on what he discussed with the two leaders.

US Secretary of State Rex Tillerson is to meet the Turkish president in Ankara. American support for the Syrian Kurdish YPG militia is a major sticking point in relations between the US and Turkey. (29.03.2017)

Despite the US' warnings, analysts say it is at present unlikely to launch a pre-emptive strike against North Korea. But they warn that a minor miscalculation by either side could quickly escalate. Julian Ryall reports. (20.03.2017)

Tillerson to meet with NATO members in Brussels

US envoy Rex Tillerson has reversed his decision not to attend a NATO meeting in Brussels. The announcement came as German Defense Minister Ursula von der Leyen called on the US to acknowledge Berlin's contributions. (25.03.2017)