Women interviewed by Amnesty International said they were raped and thrashed, in some cases, in front of their children. A new report says many of them were unable to get medical help after the assault. 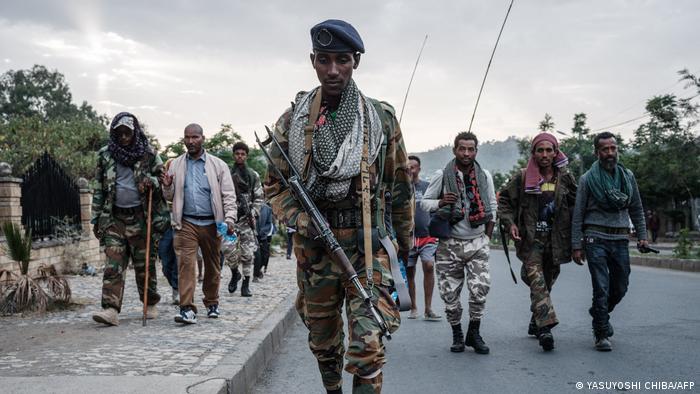 Tigray fighters raped, robbed, and beat up local women after attacking a town in Ethiopia's northern Amhara region, according to a new Amnesty International report released on Wednesday.

The report is the latest account of disturbing human rights abuses committed during the year-long conflict.

It follows an earlier report by the human rights watchdog that documented the rape of thousands of women and girls by the Ethiopian and Eritrean forces in the Tigray region.

Amnesty's investigation is based on interviews with 16 sexual assault survivors and local authorities in the town of Nifas Mewcha.

The report focused on abuses that took place after the Tigray People's Liberation Front (TPLF) entered Amhara in August.

Fourteen out of the 16 women interviewed by Amnesty said they were gang-raped by Tigray fighters, in some cases at gunpoint and with their children watching.

"Three of them raped me while my children were crying," one of the survivors was quoted as saying. "They slapped me (and) kicked me. They were cocking their guns as if they are going to shoot me."

The women said they identified the Tigrayans by their accents and ethnic slurs they used against Amhara.

A 28-year-old mother of two told Amnesty that one of her four rapists called her donkey as they assaulted her while her daughter watched.

"He was saying: 'Amhara is a donkey, Amhara has massacred our people, the Federal Defense forces have raped my wife, now we can rape you as we want'," she said.

Yet another woman said she fell unconscious after TPLF fighters raped her and beat her, using the butts of their guns.

The women targeted by the TPLF in Amhara were mostly from low-income families, doing menial jobs, according to Amnesty researcher Fisseha Tekle.

According to the rights group, a majority of the women were suffering from health problems as a result of the assaults.

All of them were unable to get the medical help they needed because Tigray forces looted local hospitals, leaving them without post-rape care.

"They defy morality or any iota of humanity."

Why is there a conflict in Ethiopia?

Since early November, 2020, the Ethiopian government and the TPLF have been exchanging fire in a conflict that has claimed thousands of lives and has left more than 400,000 people facing famine.

The Tigray forces, who had dominated Ethiopia's national government for almost three decades, expanded the war into Amhara since retaking much of the northern Tigray region in June.

Last week, a report by the United Nations Office of the High Commissioner for Human Rights said that all sides have committed abuses in the war.

United Nations officials said staffers were rounded up by government authorities in raids targeting ethnic Tigrayans. Six have been arrested and released, while 16 others remain in custody.