Rights group Amnesty International said the brutality against women could amount to "war crimes," with hundreds raped in the conflict in Ethiopia's Tigray region. 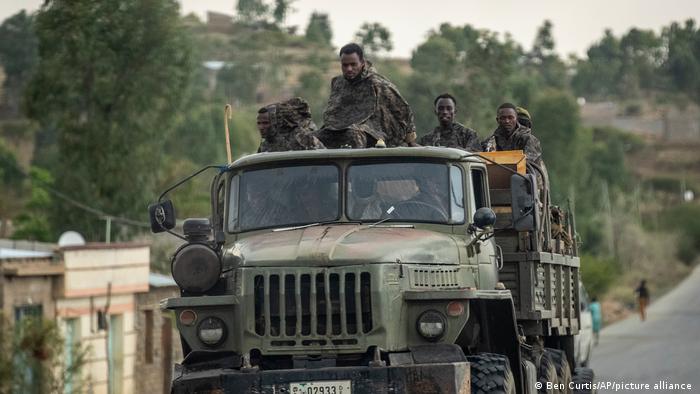 The conflict in Tigray has been ongoing since November 2020

Ethiopian and Eritrean troops raped hundreds of women and girls during the Tigray war, according to Amnesty International.

The human rights group released its report on Wednesday as Ethiopian law enforcement officials investigate the said violations, with at least three soldiers convicted and 25 others charged.

"It's clear that rape and sexual violence have been used as a weapon of war to inflict lasting physical and psychological damage on women and girls in Tigray," said Amnesty's Secretary-General Agnes Callamard.

"The severity and scale of the sexual crimes committed are particularly shocking, amounting to war crimes and possible crimes against humanity.

Amnesty said it based its report on interviews with 63 sexual violence survivors in the restive region between March and June.

Some survivors said they had been sexually assaulted by multiple men who held them captive for weeks. Others described being raped in front of their family members.

Amnesty said some interviewees reported "lasting and possibly irreparable damage" to their reproductive organs as a result of the violence.

"They raped us and starved us. There were too many who raped us in rounds," said one 21-year-old survivor who reported being held for 40 days.

According to the report, health facilities in Tigray registered 1,288 sexual violence cases from February to April 2021 alone, but the number of unreported cases is likely to be higher.

How much is really known?

Independent analyst and DW columnist Befeqadu Hailu told DW that it is difficult to obtain a clear picture of the extent of violations detailed in the Amnesty report due to the telephone blackout in the region.

"There are direct attacks against civilians, rape and so on," Hailu said. The situation is compounded by a “blockade of humanitarian aids, medical aids" to victims.

Hailu said there is a risk that sexual violence against girls and women could worsen, along with starvation, if the Tigray conflict does not end soon.

What is happening in Tigray?

In November 2020, Ethiopian Prime Minister Abiy Ahmed's government launched an eight-month military offensive against the Tigray People's Liberation Front (TPLF), which had been in power in the region until then.

Neighboring Eritrea has been involved in the conflict at Abiy's side from the start.

In June, the central government in Addis Ababa announced an unexpected unilateral ceasefire, which did not stop the fighting.

According to the United Nations, some 170,000 people have been displaced in the recent months alone.

Ethiopia's attorney general's office said in May that three soldiers were convicted and sentenced for rape. Another 25 troops were charged with "committing acts of sexual violence and rape," it said, adding that investigations were ongoing.

On Tuesday, Prime Minister Abiy said civilians should take up arms to halt the advance of Tigrayan forces "once and for all."

The political analyst Befeqadu Hailu said the stance will not be helpful in resolving the crisis.

"The call for civilians to join is unnecessary," Hailu said adding that it is the civilians who eventually suffer the consequences of the war.

According to Hailu when both sides of the conflict invite civilians to join their armies, it is for their own interests alone. "It is the civilians who have to suffer when there is war," Hailu said.

On Wednesday, TPLF spokesperson Getachew Reda said they were in talks with the Oromo Liberation Front (OLA) on forging a military alliance.

"We believe that we must work with the powers that be to save Ethiopia from the current crisis. We are having conversations to this end," Reda said. "The OLA is active inside Ethiopia, and is one of the parties which can decide the fate of the country. I cannot disclose more at this point."

Political analysts warn that an alliance of this nature could signal a major turning point in the Tigray conflict and ultimately put Addis Ababa at risk.