After an incredible final round full of drama at The Masters, Tiger Woods secured his first major golf title in 11 years. Woods, who wasn't leading at the start of the day, played superbly and got a slice of luck. 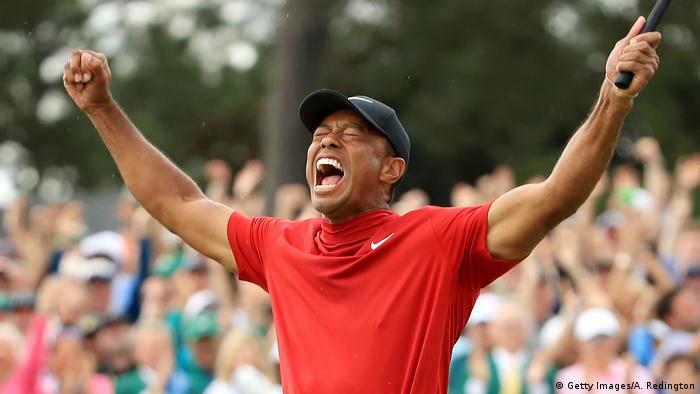 Tiger Woods sealed one of the most remarkable comebacks in sport, let alone golf, to win his fifth Masters and seal an epic return from scandal and injuries that once threatened his career. It's Woods' 15th major, and the 14 years between his fourth and fifth Masters triumph is the longest gap between majors.

A remarkable 22 years after Woods won his first major at Augusta National, Woods sunk a short bogey putt to seal the win as the crowd erupted in chants of "Tiger! Tiger! Tiger!"

Woods, who started the day two shots behind Francesco Molinari, fired a final-round 70 for a 13-under par to claim a one-shot win over Dustin Johnson, Xander Schauffele and Brooks Koepka.

After battling to overhaul Italian Francesco Molinari, who had led for 54 holes, Woods birdied the par-5 13th to join a lead pack of five at 12-under. Woods then birdied the par-five 15th hole to take a one-shot lead and stretched it to two strokes with a birdie at the par-three 16th as Molinari's challenge faded with double bogeys at the 12th and 15th. The victory marks an historic comeback for Woods. The golf superstar's career imploded after a 2009 sex scandal before unraveling completely amid injuries, addiction and personal problems. In 2016, Woods admitted he thought he would never play again. A year later, Woods had spinal fusion surgery to address his chronic back pain. In 2018, he returned to form and won his first tour championship in five years. Even then, few expected Woods to return to the top of the sport and win another major.

And yet, on April 14, 2019, Woods won the Masters - his first major in 11 years. Not since the 2008 US Open had Woods hoisted a major trophy, and Woods' fifth Green Jacket leaves him one short of Jack Nicklaus' record of six. His victory also makes him the second player, after Jack Nicklaus, to win the Masters in three different decades.