It's been six decades since an uprising in Tibet escalated into violence and forced the Dalai Lama to flee to India. Observers tell DW how Beijing's crackdown on dissent in the region has become increasingly harsh. 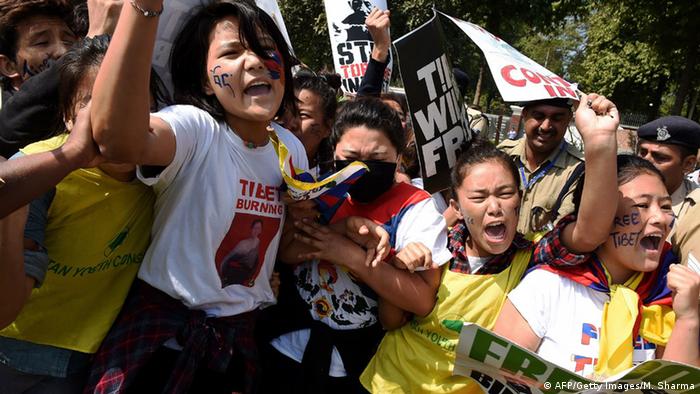 March 10 is an important date for the Tibetan struggle. On this date in 1959, tens of thousands of Tibetans blockaded the palace of their leader, the Dalai Lama, to protect him against perceived threats from the Chinese army.

Demonstrations ensued, with protesters blocking streets across the capital Lhasa for days. They demanded that the Chinese leave their land, which had been brought under Chinese rule by force after the Communist Party of China (CPC) seized national power in Beijing in 1949.

When protests escalated into fighting, Tibetan forces were quickly defeated by Beijing's People's Liberation Army. Thousands were killed and tens of thousands were forced to flee, including the Dalai Lama.

Read more: Memories of 1959 – Fleeing Tibet with the Dalai Lama

60 years later, Tibetans continue to fight for autonomy, but many who do so live overseas. Inside China, increased surveillance and a heavy clampdown on the practice of religion have made it increasingly difficult to continue the fight.

Here's a look at how the struggle is shaping up, both inside and outside Tibet.

Severe repression has made it more and more difficult for those living inside Tibet to protest against the actions and policies of the Chinese government. John Powers, a political expert who's also a practicing Tibetan Buddhist, said that on a visit to the region several years ago he noticed a "dramatic increase" in surveillance.

The Chinese have been developing sophisticated artificial intelligence technology to track the activities and movements of Tibetans, the professor said. This, coupled with travel restrictions, made the area seem like "a huge Gulag."

The Tibetan Autonomous Region (TAR) borders India, Nepal and disputed territory Kashmir. Many borders in this region have been disputed and this map serves only to give a sense of the locations mentioned in this article.

"You're confined to your place of residence — your village or town — and you can't go outside of your town without official permission. About every half an hour or so of travel, there is a police checkpoint where your papers are checked," Powers said.

He compared the program of "patriotic re-education" in Tibet to what is happening in neighboring Xinjiang, where the government is accused of forcing millions of Uighur Muslims to live in internment camps described by the UN as "a sort of no rights zone."

"The Tibetans are very aware of what is happening next door. The person who is running that campaign is the former Communist Party leader in Tibet, who had a program not as extensive but similar in its intentions," Powers said. 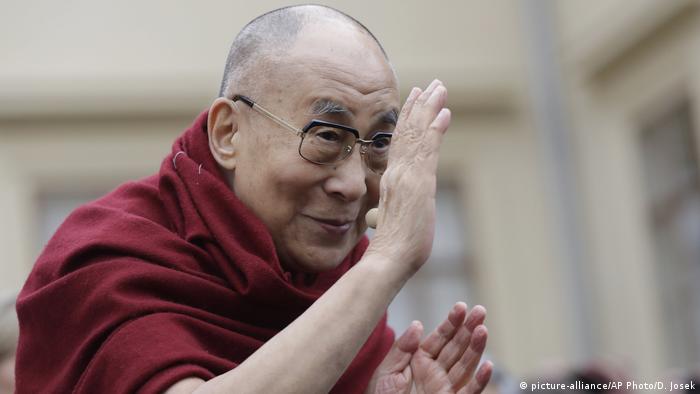 The Dalai Lama, Tibet's spiritual leader, has been living in exile since the uprising

'Minds and souls look outside Tibet'

After the Dalai Lama fled to India, he established a Tibetan government in exile, known as the Central Tibetan Administration (CTA). The CTA  is based in Dharamsala, India.

Rinzin Dorjee, a researcher at the CTA-affiliated Tibet Policy Institute think tank, said that those who live inside Tibet continue to look outwards for guidance.

"Even though physically they are inside Tibet, they look up to Dharamsala, where his Holiness the Dalai Lama is residing," he said. "Tibetans are not loyal to the Chinese government."

According to Dorjee, there have been more than 150 cases of self-immolations — people burning themselves in protest — in Tibet in recent years. 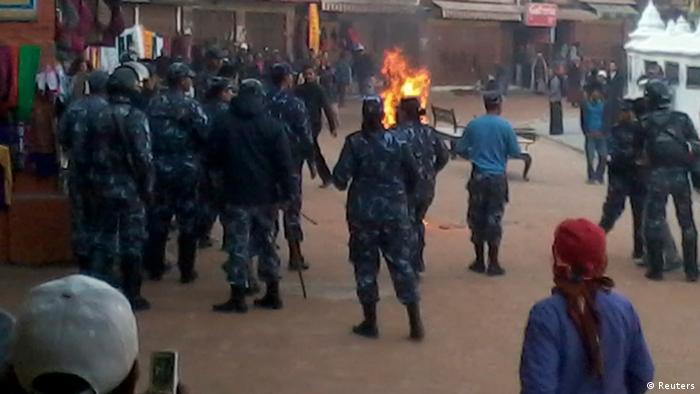 But China's policy on Tibet could be regarded as successful in some ways, said Sarah Cook, senior research analyst for East Asia at the NGO Freedom House.

"But at what cost? Have they succeeded in completely quashing Tibetan faith and allegiance to the Dalai Lama? Absolutely not," the expert added.

Inside the complicated politics of Tibet

According to Cook, increasing repression in China could turn out to be "very dangerous" for the CPC. Clampdown on the practice of religion has expanded under Chinese President Xi Jinping, leaving over 100 million people at risk of "high" or "very high" levels of persecution, she said.

Activities and groups that were previously sanctioned — or safe — have been pushed to the other side of the red line. This could "expand the resistance" against the CPC, say observers. 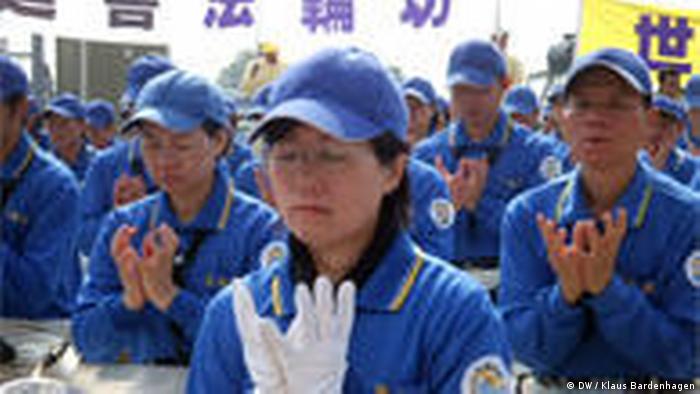 The Falun Gong movement has been banned in China since 1999

She pointed to the example of Falun Gong. "[The CPC] really shot itself in the foot," she said. "They took 70 million people who just wanted to meditate and read spiritual texts and follow truth, compassion and tolerance in their day-to-day lives.

Dorjee, of the Tibet Policy Institute, told DW that the exiled government had been in talks with Chinese leaders until 2010. Since then, "talks have been stalled."

"We are asking for more meaningful autonomy where Tibetans can govern themselves," he said. "We believe that during this 14th Dalai Lama, Tibetan issues will be resolved… if the Chinese are sincere in resolving the Tibetan issue."

But Freedom House's Sarah Cook said that Beijing's unlikely to back down from its current policy on Tibet.

"I think the Communist Party feels threatened by really anything — or anyone — that people in China give allegiance to above the Community Party," she said.

"If you look at what the Dalai Lama actually says, he's not calling for independence," she said. "There are others in the Tibetan movement who are, but he's willing to accept autonomy even under Chinese rule. But they just can't handle real autonomy or real religious freedom." 'We are no longer alone'

Although oppression has increased inside Tibet, younger generations born overseas in exile have carried on the struggle.

Dorjee Tseten, executive director at Students for a Free Tibet (SFT), said that overseas Tibetans have joined forces with other anti-CPC groups.

"Tibetans who live in exile, who have been fleeing the censorship and oppression, are engaging in campaigns… collaborating with other movements organized by Uighur people, Taiwanese, Hong Kongers, Chinese democracy activists and Falun Gong practitioners," he said.

SFT has embarked on a campaign to shut down Confucius Institutes, leading to the closure of 12 of them in the US last year and even more in Canada, according to Tseten. The young activist seemed optimistic about the future.

"The new generation of Tibetans, we are no longer alone. We are serving in coalition... we are united in our front for freedom and democracy," he told DW.

Read more: Why is the US targeting China's Confucius Institute? 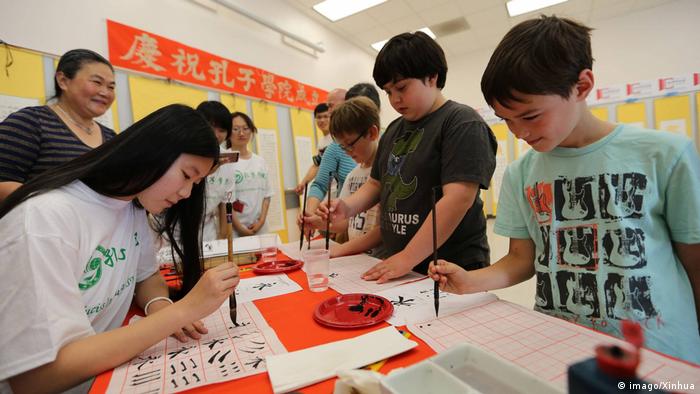 "For the Chinese government, March is a sensitive time because of the uprising," Tseten said. "So they have already restricted travel to Tibet, especially in the capital city Lhasa."

"[But] this anniversary is being marked in almost 100 cities around the world," he pointed out.

"We are marking this anniversary of the uprising to remember those who laid down their lives for Tibet and also to stand in solidarity with the Tibetan people inside Tibet."