China already holds the two fastest supercomputers. Now it hopes to knock the USA off the third spot with the first ever exascale machine. Tianhe-3 will handle one quintillion calculations per second. 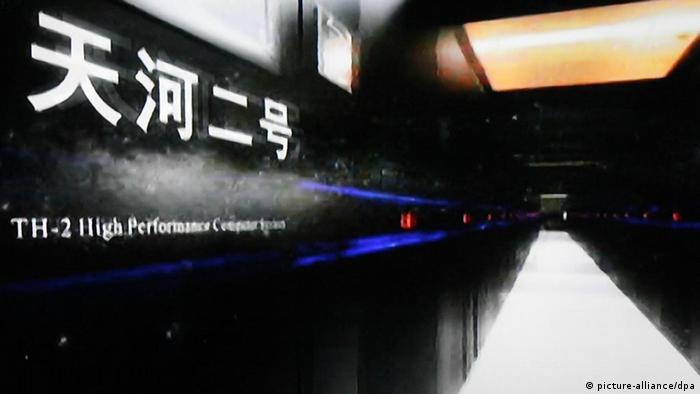 Fast isn't the word. If China's Tianhe-3 supercomputer manages to hit the exascale mark, it will handle one quintillion calculations per second.

Meng Xiangfei, a director at the National Supercomputer Center at Tianjin, told the China Daily newspaper that his institute aims to have a prototype of its Tianhe-3 ready by 2018. For that they will need breakthroughs in high-performance processors. But Meng is confident.

If they succeed, Tianhe-3 will be 10 times faster than the current fastest supercomputer in the world, the Sunway TaihuLight.

The Sunway runs at 93 petaFLOPS, with a reported peak speed of 125 quadrillion calculations per second.

"Its computing power is on the next level," Meng told the newspaper. "It will help us tackle some of the world's toughest scientific challenges with greater speed, precision and scope."

The Tianhe-3 will be measured in exaFLOPS.

Its sibling, the Tianhe-2 runs at 34 petaFLOPS, while the USA's next best, Titan, creaks in at 18 peteFLOPS.

If the Tianhe-3 breaks the peta-barrier, its processing speed will leave the rest for dead - which is probably a good thing as supercomputers don't have the longest life-expectancy.

Super, but compared to what?

How can we even begin to image the Tianhe-3's processing speeds?

Well, one of the world's first computers (as we know them) was the Zuse Z3. It was a programmable, digital computer. Based on the same Boolean theory that gave us the zeros and ones of modern computing, the Z3 was the first solid implementation of so-called "flip-flops" and what became "floating point" arithmetic.

A computer's processing speed is measured (in part) by the number of floating points it can handle per second - and that's why we refer to a FLOP or FLOPS.

In 1941, the Z3's average single calculation speeds were 0.8 seconds for addition and 3 seconds for multiplication.

Fast-forward 70 years or so and the average smartphone will perform addition and multiplication almost before we've finished entering the numbers…Imagine that, predictive math!

Smartphones speeds tend to be measured in gigaflops (1 GFLOP = 1,000 000 000), but it's hard to get a good read on the latest models as the manufacturers are so competitive and as a result secretive. It is said, however, that Apple's A-series chips, which are made by Imagination Technologies, are years ahead of Qualcomm's Snapdragon chips, which Samsung and Google use in their phones.

Gaming consoles are a lot faster than smartphones, but then again nothing compared to a supercomputer. It would take more than 18,000 Playstation 4s to match the Tianhe-2 - which, to remind us, is half as fast as China's Sunway supercomputer, and that is 10 times slower than the Tianhe-3 will be.

Like I said, fast just isn't the word. But, then, the Tianhe-3 won't be a toy. Chinese scientists hope to use it to analyze smog distribution, gene sequence and protein structures to help develop new medicines. They also say it will simulate earthquakes and epidemic outbreaks in greater detail, "allowing swifter and more effective government responses."

Scientists have long puzzled over what dark matter, thought to account for 85 percent of the mass of the universe, is made of. With the help of a German supercomputer, they might just be a little closer to finding out. (02.11.2016)

China Daily report on the Tianhe-3