Militants launched a deadly attack on an eastern jail that holds hundreds of Taliban and "Islamic State" (IS) fighters. The assault happened towards the end of a cease-fire that saw hundreds of prisoners freed. 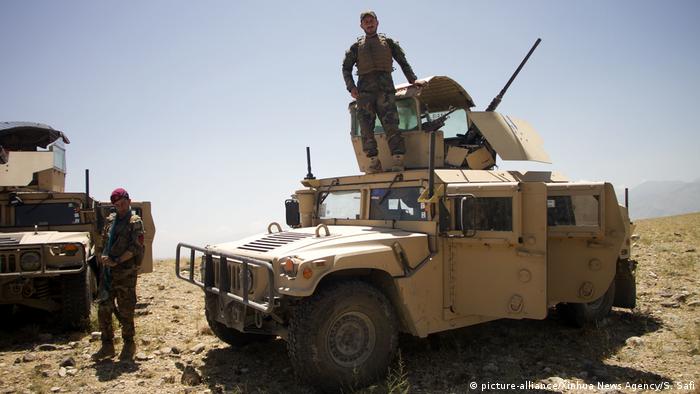 Armed men on Sunday stormed an Afghan government-controlled prison outside the eastern city of Jalalabad, killing at least three people and injuring 24 others.

The attack comprised of a large car bomb and at least two smaller explosions heard inside the facility, local officials said.

The militants opened fire at the prison security guards, with the authorities deploying police forces to the scene, where a gunbattle was still unfolding several hours later.

A number of prisoners apparently escaped during the clash.

The Taliban denied they were involved in the attack and insisted they were honoring the cease-fire.

By evening, however, the "Islamic State" (IS) armed group claimed responsibility, according to its Amaq news agency.

The situation on the ground is "hectic," Kabul-based journalist Ali Latifi told DW. "There are inmates from the prison that were released. Some escaped. Some turned themselves back in to security forces. There is footage of some [prisoners] saying that they escaped for their own safety because they have no allegiance to the so-called Islamic State group or to the Taliban or any other armed group but that they just had to get out of the compound."

"What's really important about this attack is that these so-called Islamic State forces are the ones who claimed responsibility," said Latifi. This attack and those on a Sikh temple and maternity ward raised "a lot of questions" about the security situation in Afghanistan and President Ashraf Ghani's claims to have 'obliterated' IS in November 2019, Latifi told DW.

Sunday's attack came at the end of a weekend cease-fire to mark the Muslim festival Eid-al Adha in which the government released hundreds of Taliban prisoners.

Afghanistan’s National Security Council said on Twitter that 317 prisoners had been freed since the holiday began on Friday.

The inmates were part of the 500 Taliban prisoners ordered free by Afghan President Ashraf Ghani on Friday in a gesture of goodwill.

Both President Ashraf Ghani and the Taliban have signaled that protracted peace negotiations could begin once Eid-al Adha is over.

The Taliban and the US in February signed a deal that slated Afghan peace talks to begin in March, but discussions were delayed by disagreements over terms of a prisoner swap.

The deal — which sets the stage for the withdrawal of all international troops from Afghanistan — required Kabul to free some 5,000 Taliban prisoners in exchange for 1,000 Afghan security personnel held by the Taliban.

The individuals freed over the weekend bring the total number of Taliban prisoners released from Afghan custody to just over 4,900.

The Taliban on Thursday said it had freed 1,000 prisoners as agreed in its deal with the US.

Afghan authorities continue to hold some 400 Taliban prisoners accused of serious crimes, despite the militant group’s request for their release.

Ghani on Friday had said he had "no authority" under the country's constitution to pardon the inmates' crimes. He would instead call a loya jirga, a traditional grand council of elders, to decide whether they should go free.

Deadly violence has persisted in Afghanistandespite the signing of the US-Taliban deal, with Taliban forces killing over 3,500 Afghan troops, the president said.

Foreign troops have been on the ground in the Middle Eastern country since 2001.