Pope Benedict XVI was greeted by tens of thousands in the southwestern city of Freiburg on the third day of his German trip. The pontiff reiterated his support for traditional values and spoke out against gay marriage. 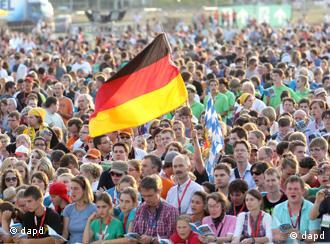 The pope remained unshaken by a minor security scare in Erfurt on Saturday as he addressed welcoming crowds in the city of Freiburg, in Germany's Catholic heartland.

More than 25,000 people took to the streets to welcome the pontiff back to his native country. As he stood before the southwestern German city's 800-year-old Cathedral, Pope Benedict VXI spoke of his "great joy" and the "wonderful meetings that took place in Berlin and Erfurt."

Although some 9,000 people turned out in Berlin to denounce the Vatican's views on issues such as homosexuality and contraception, the pope's Freiburg visit remained free of conflict.

Nevertheless security was high after a man was arrested earlier on Saturday in the eastern city Erfurt for firing an airgun near the location where the pope was due to celebrate mass.

The man was said to have fired four shots at a security guard about a kilometer (600 yards) away from Erfurt's Cathedral Square.

Police have since confirmed no one was injured and the pope had not been in danger at any point, since he arrived an hour after the incident. 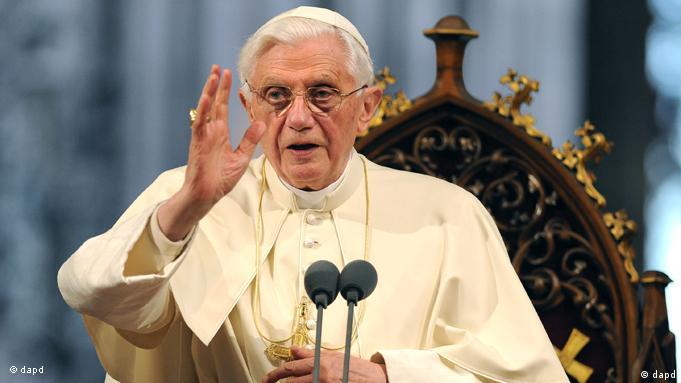 The pope reiterated his defense of conservative values on Saturday, calling for a common front with Orthodox Christians. He warned of threats posed by abortion and gay marriage, a position that continues to put him at odds with many in an increasingly secular Germany.

Benedict said religion must not be banished from public life and during a meeting of Orthodox Christians, he said that Christian churches "are walking side by side" in the battle.

"They speak up jointly for the protection of human life from conception to natural death," he said on the third day of his official visit to Germany.

"Knowing, too, the value of family and marriage, we as Christians attach great importance to defending the integrity and the uniqueness of marriage between one man and one woman from any kind of misinterpretation," he said.

"Here the common engagement of Christians, including many Orthodox and Oriental Orthodox Christians, makes a valuable contribution to building up a society equipped for the future."

The 84-year-old pontiff followed his address in Freiburg by fulfilling his request to meet the former German chancellor Helmut Kohl. 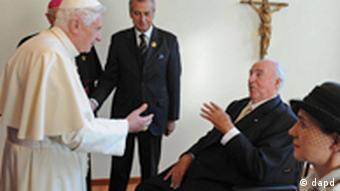 According to Hans Langendörfer, the head off the German Bishops' Conference, the Pope had previously "expressed his wish to meet one person in particular, former chancellor Kohl."

"Helmut Kohl is somebody who is really deeply entrenched in German history, who worked with John Paul II, the Polish pope, to overcome the division of Europe," added Langendörfer

In the private meeting the pope was said to have praised Kohl, 81, as the "chancellor of unity."

Kohl's office has so far declined to comment on the meeting saying the former chancellor, who governed from 1982 to 1998, considered it a private affair.

On Sunday, the fourth and final day of his trip, Benedict is due to hold an open-air mass in Freiburg for as many as 84,000 people before returning to Rome at the end of the day.