The latest in a series of anti-government protests in Poland has brought thousands of people into the streets. But this time they also came out to defend the man who led the pro-democracy movement that toppled communism. 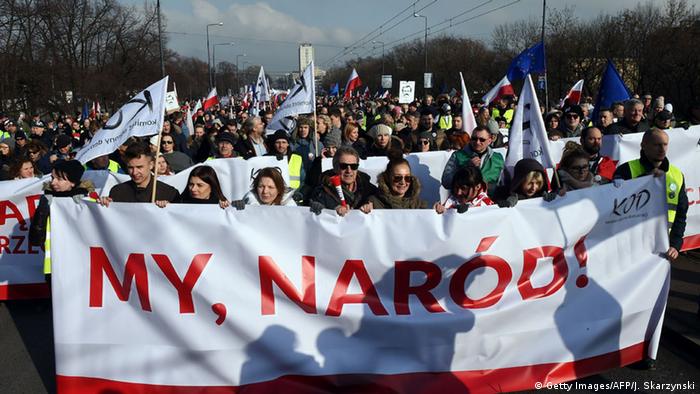 Thousands took to the streets of Warsaw on Saturday for a "We the People" protest against Poland's conservative government that is accused of weakening the country's democratic foundations.

Since winning an outright majority in parliamentary elections last autumn, the Law and Justice (PiS) party has proceeded to roll back press freedoms and gut the check-and-balance authority of the country's high court.

The demonstration was the latest organized by the Committee for the Defense of Democracy (KOD), which was formed in November shortly after the PiS was elected.

The "We the People” slogan takes its inspiration from the preamble of the US Constitution.

At least 15,000 gathered, according to police, on a cold, sunny, winter day; city hall, which is aligned with the opposition, put the figure at 80,000.

Protesters chanted "We will defend democracy” and "Lech Walesa" - the former Solidarity leader and ex-president - and waved flags and banners and listened to speeches.

"We want a free and open Poland ... a Poland where there is room for everyone," said, Mateusz Kijowski, head of the KOD. "We've come to make it clear that freedom and democracy are the most important values guarded by the constitution," he added.

Back to a police state

Jan Rogalski, a 48-year-old resident of Warsaw, said the new government wants to roll back the clock.

"The PiS wants to control everything, the state, the economy and the people," he said. "We can't let them take us back to communist times."

The demonstration was originally intended to focus solely on the PiS's alleged trampling of democracy. But new allegations that Lech Walesa, who led the pro-democracy movement that led to the fall of communism in 1989, collaborated with the communist era secret police brought a wave of support for the former president and Nobel laureate.

"We also want to show our solidarity with Lech Walesa, who symbolizes the victorious struggle for freedom and democracy in Poland, Europe and around the globe," Kijowski said.

Last week state prosecutors seized previously unknown files dating from 1970-76, from the widow of a communist-era general that alleges Walesa was a collaborator. 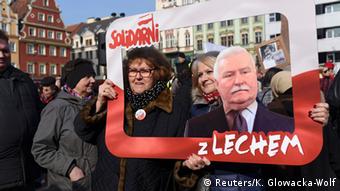 A woman with a cardboard cutout of former dissident, president and Nobel laureate Lech Walesa

While enigmatically admitting to having "made a mistake," the former president insists files implicating him are "complete fakes."

Poles came ready to defend the man who many argue did more than anyone throughout the 1980s to bring about the collapse of communism in Poland, and ultimately across Eastern Europe.

"We came here to defend a symbol of Polish history against hate," Grzegorz Schetyna, the head of the opposition Civic Platform party, told the crowd. "We are defending Poland against Jaroslaw Kaczynski. We will not allow Poland to be taken over."

Poland's prime minister has told the EU it has no business meddling in the country's internal affairs. The eastern European country has come under pressure from the EU over controversial judicial and media reforms. (19.01.2016)

The Committee for the Defense of Democracy (KOD) was set up in November 2015 to protest at what it sees as attacks on democracy in Poland. Its founder, Andrzej Kijowski, spoke with DW’s Jo Harper. (16.01.2016)