EU Council President Donald Tusk and Polish President Andrzej Duda say a dispute over Warsaw's legal reforms should be conducted with restraint. Duda insisted that recent changes to Polish law were "nothing exceptional." 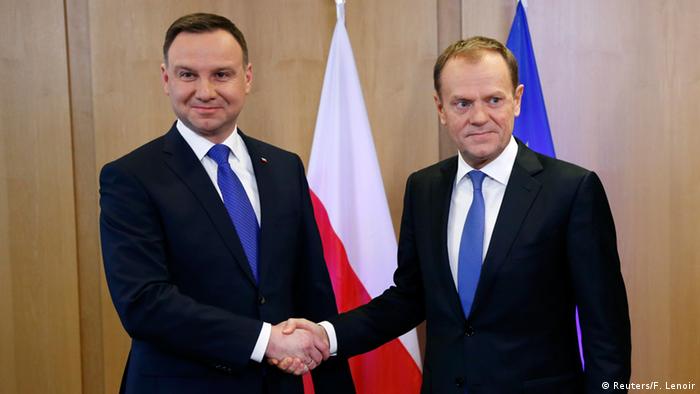 Speaking after talks in Brussels on Monday, Tusk (picutred right) and Duda joined in urging both sides in the current dispute over legal changes in Poland to avoid over-emotionality, after the EU launched an inquiry into whether the reforms violated democratic norms.

Anyone who has the "good of the EU at heart should exercise restraint and refrain from hysterical behavior," said Tusk, who is a Polish citizen.

Tusk conceded that Poland's reputation had been "shaken slightly" by recent events, but said he was "not very enthusiastic" about the decision by the European Commission to start a probe into Warsaw's legal amendments.

Although he thought the commission was acting "in good faith," he could "imagine that this could be achieved by other methods without triggering this procedure," Tusk said.

Duda in his turn said he hoped "these unnecessary emotions that have brewed up in the media and the political sphere will calm down," adding that "nothing exceptional" was happening in Poland.

The European Commission, the EU's executive body, announced on Wednesday that it would begin assessing legal changes introduced by Poland's new right-wing government to see whether they met the bloc's democratic standards.

The probe is taking place under a "rule of law" mechanism introduced in 2014 - and invoked here for the first time - that gives the EU the right to investigate and even penalize any member state for breaching democratic and rights norms established by the bloc.

The move came after the Polish conservative Law and Justice (PiS) government, which won elections in October, changed the voting system of the constitutional court to restrict its right to censure legislation.The new administration has also introduced a bill allowing it to appoint and sack senior figures in public radio, raising concerns about media freedom in some quarters.

Many EU member states in the 28-nation EU see the changes in Poland as reflecting a return to nationalist, anti-EU sentiment in the bloc's newer eastern European members.

Polish Prime Minister Beata Szydlo is to address the European Parliament on the issue on Tuesday.

Poland's parliament has passed an amendment changing the functioning of the country's constitutional court. Critics argue the law will erase checks and balances on the new conservative government. (23.12.2015)