Demonstrators have come out in droves to show their support for a trio of jailed pro-democracy activists. The three were originally sentenced to community service but were handed harsher sentences this past week. 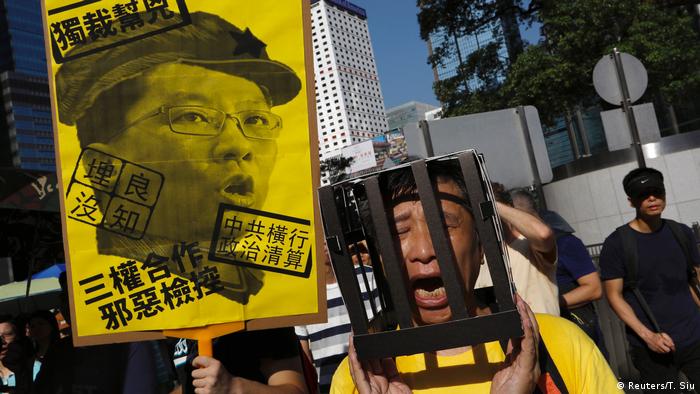 Thousands of demonstrators took to the streets of Hong Kong on Sunday to protest the prison sentences handed to three pro-democracy advocates last week. Joshua Wong, Nathan Law and Alex Chow were jailed for six to eight months for unlawful assembly, charges relating to the 2014 "Umbrella Movement" protests.

Many of the protestors on Sunday carried umbrellas proclaiming solidarity with the movement that, three years earlier, had objected to Beijing's strong influence in Hong Kong's election. The 79-day protest and "occupation" of important squares and streets in the city was a direct response to the announcement that mainland China would select all of the candidates for Hong Kong's chief executive, despite promises of autonomy.

"Free the political prisoners," they chanted, marching on despite the sweltering heat.

"This shows that the Hong Kong government, the Chinese Communist regime and the Department of Justice's conspiracy to deter Hong Kong people from continuing to participate in politics and to protest using harsh laws and punishments has completely failed," said co-organizer Lest Shum, according to the Reuters news agency.

Last year, the three activists were handed lighter sentences for unlawful assembly, such as community service. However, the Department of Justice applied for a  review amidst a government crackdown on opposition voices, hence the harsher sentences delivered to the trio this past Thursday.

President Xi Jinping has landed in Hong Kong to mark 20 years since the territory was handed back to China by Great Britain. Dozens of pro-democracy activists have already been arrested ahead of his visit. (29.06.2017)