Hong Kong activist Joshua Wong and two other student leaders have been sentenced for their role in the Umbrella Movement's 2014 demos. The Beijing-backed government has been seeking tougher sentences for protesters. 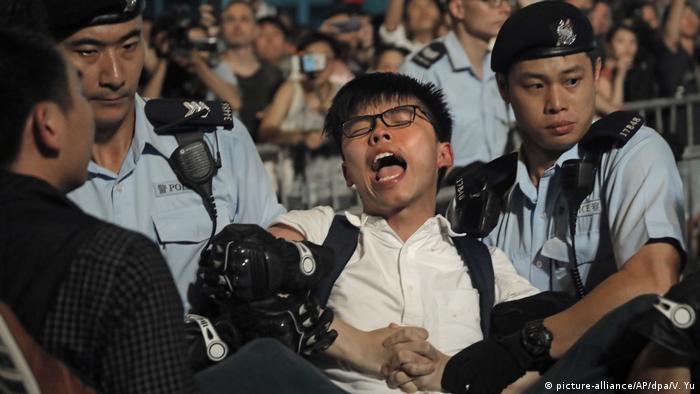 Joshua Wong, Alex Chow and Nathan Law were found guilty of "unlawful" assembly linked to the Umbrella Movement's protests in 2014, which saw pro-democracy demonstrators shut down much of central Hong Kong for almost three months. They were sentenced to six, seven and eight months respectively.

The massive gridlock three years ago proved to be the greatest challenge yet to the Chinese government's grip on Hong Kong since it was handed over by Britain in 1997. Protesters demonstrated against China's increasing influence over the semiautonomous city and demanded that Hong Kong be allowed to nominate and elect its own chief executive in the proposed 2017 elections. However, those demands were ultimately rejected.

Wong, in particular, came to prominence as one of the leaders of the movement because he was just 17 and still in high school at the time.

Now just shy of his 21st birthday - the age at which Hong Kong's residents are allowed to run for office - Wong had indicated publicly that he intended to run for a seat in the city's legislature. However, Thursday's conviction makes him ineligible to run for political office for five years.

Law, aged 24, became one of Hong Kong's youngest democratically elected lawmakers last year, only to be expelled from office last month after a court found that his oath was invalid because he added words and spoke in a tone of voice that "disrespected" China.

Thursday's ruling is the latest case brought before the High Court by Hong Kong's Beijing-backed government, which is seeking harsher penalties for pro-democracy protesters.

In August 2016, a lower court found Wong and Law guilty of unlawful assembly and sentenced them to community service, while Chow was convicted of inciting people to join the protest movement and handed a suspended three-week jail sentence.

Thursday's ruling, however, reflects the public prosecutor's push for harsher sentences for political activists, many of whom have only recently become adults.

Also this week, 13 mostly young activists were sentenced to time in prison for storming the Legislative Council - again, only after state prosecutors pushed for harsher sentences than those handed down by the lower court.

"The outlandish application seeking jail time is not about public order, but is instead a craven political move to keep the trio out of the Legislative Council, as well as deter future protests," Human Rights Watch's director for China, Sophie Richardson, said in a statement.