The founding members of Hong Kong's Occupy Central movement have called on pro-democracy activists to pull back from their main protest site. Earlier, student leader Joshua Wong had called on supporters to regroup. 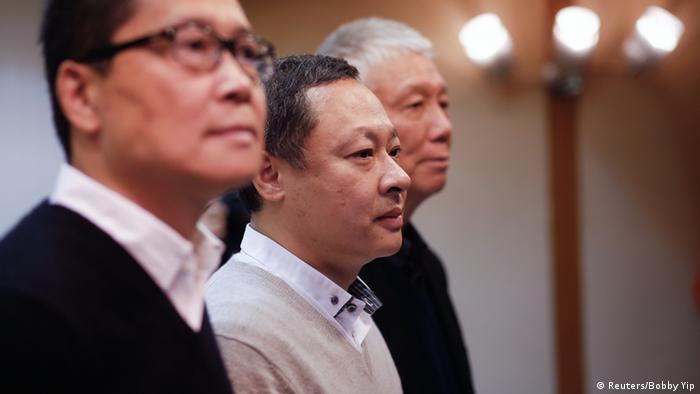 The founders of Hong Kong's Occupy Central movement urged pro-democracy activists on Tuesday to retreat from the city's main protest site next to the government headquarters as the situation had become dangerous.

Thousands of Hong Kong pro-democracy activists had clashed with police there early on Monday as they tried to reclaim Lung Wo Road - a major traffic artery connecting the east and west of Hong Kong island. Dozens were arrested during an ensuing night of violence.

"We can see that frontline police officers seem to be out of control," said one founder Benny Tai, adding that he feared officers' loss of control would get worse, and that people would get seriously hurt.

Tai and two other founders, Chan Kin-man and Chu Yiu-ming, also said they would surrender to police on Wednesday for their role in gatherings, which are considered illegal by the government.

The call to demonstrators came just hours after student leader Joshua Wong had called on supporters to regroup in the heart of the city, to demand greater democracy.

Wong has also begun a hunger strike to demand talks to press China to scrap plans to screen candidates for Hong Kong's 2017 election. The Chinese government has said it will extend direct elections to Hong Kong's legislative body to choose the territory's chief executive, but it has stood by its plans to screen candidates, despite months of protest.

Occupy Central initially led the pro-democracy protests, which began in late September, but has receded as students continued with demonstrations. At their peak, the protests drew more than 100,000 to the streets of Hong Kong.

Hong Kong police crack down on protesters in Mong Kok

Police are again chasing down activists in Hong Kong. Amnesty International has warned of "excessive force" ahead of a weekend rally following scuffles as a major protest site was cleared earlier this week. (29.11.2014)