Thousands brave rain to protest over new Stuttgart rail station | Germany| News and in-depth reporting from Berlin and beyond | DW | 28.08.2010

Thousands of people rallied against one of Europe's biggest construction projects in the German city of Stuttgart as part of an ongoing protest that may have serious repercussions for Angela Merkel's conservatives. 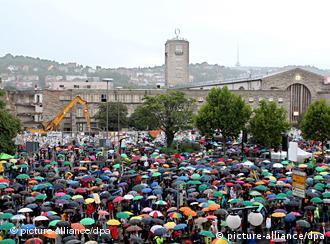 The protesters want to protect the current station, which is a major landmark

Up to 30,000 people took to the streets on Friday, August 27, to rally against the ambitious underground railway station overhaul in the city Stuttgart, the demonstration organizers said.

They staged a sit-down protest in an attempt to put a halt to the 4.1-billion-euro ($5-billion) project, which aims transform the capital of the state of Baden-Wuerttemberg into the rail crossroads of 21st-century Europe, but which critics say is unnecessary, and a waste of tax payers' money.

Those in favor of the project say it will free up space in Stuttgart's crowded city center by sinking platforms underground. It will also make journey times faster, with the current terminus station being turned into a through-station, meaning trains will no longer have to reverse out.

A survey published in the local Stuttgarter Nachrichten this week showed that 63 percent of the city's residents are against the project, with just 26 percent in favor. 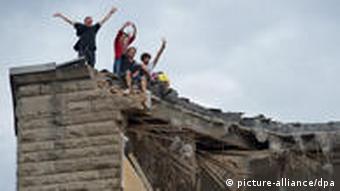 Part of the station's north wing has already been demolished

"These aren't radicals, it's the people in the middle," political scientist Gero Neugebauer told the Reuters news agency. "It should make the main political parties think twice. They always say they want people to stand up and be counted but now they're standing up and the leaders are turning a deaf ear."

The opposition to the Stuttgart rail station project could have an impact on Chancellor Angela Merkel's government. Her Christian Democrats (CDU) have ruled the south-western state of Baden-Wuerttemberg since 1953, but face an uphill struggle to hold onto power in the upcoming elections in March 2011.

"It will turn into a big problem for Merkel if the CDU lose Baden-Wuerttemberg," Neugebauer said. Polls have shown the opposition center-left Social Democrats and Greens ahead of the CDU and Free Democrats, who also form the coalition with Merkel on the federal level in Berlin.

The project, part funded by the European Union, aims to make Stuttgart part of one of the longest high-speed lines in Europe, linking Paris, Strasbourg, Munich, Vienna, Bratislava and Budapest.