Protestors bring demolition of Stuttgart train station to a halt | Germany | News and in-depth reporting from Berlin and beyond | DW | 26.08.2010

Protests are escalating in Stuttgart over a massive infrastructure project that would move the city's train station underground. On Thursday several demonstrators climbed onto a roof, temporarily stopping the demolition. 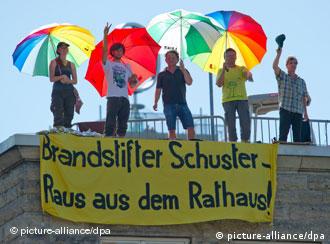 Seven people occupied the site and stopped the construction

Police in Stuttgart say that work to raze part of the city's old aboveground train station was stopped for several hours on Thursday when seven people occupied part of the building's roof. The protestors were then removed and arrested by special police forces.

Other demonstrators blocked train platforms, causing a high-speed TGV train to Paris to be delayed by about an hour. Construction workers began the demolition of the north wing of the Stuttgart train station under police protection on Wednesday, as thousands continued to demonstrate against the renovation project.

Activists claimed 12,000 people had participated in the protests, while police put the number at 6,000. Up to 50,000 demonstrators are anticipated on Friday. 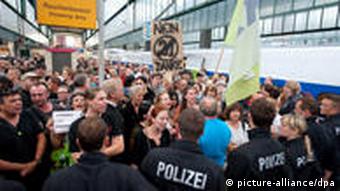 Tension between protestors and police is growing

Demonstrations against the project have been going on for weeks, and their growing boldness has raised tensions. The police president in Stuttgart, Siegfried Stumpf, said Wednesday's protests had "lost their peaceful character."

"This has moved way beyond understandable protests and civil disobedience," he said, saying firefighters and rescue workers had been harassed and that groups blockading streets had thrown bottles.

A spokesman for the Park Protectors group, which opposes the project, denied any violence and said that "the politicians, through the police, are trying to criminalize us."

The "Stuttgart 21" construction project is to link the city with one of Europe's longest high-speed rail lines by converting it from a terminus, which forces trains to pull in and out, to an underground through-station that trains can pass through.

Supporters say the project will cut down travel times, create jobs and attract investors, but opponents say its estimated cost of seven billion euros ($9 billion) is too high. Environmentalists say the current plan is not necessary and that its effect on rail traffic would be limited.