Protests grow over renovation of Stuttgart railway station | Germany | News and in-depth reporting from Berlin and beyond | DW | 21.08.2010

Up to 30,000 people took to the streets in Stuttgart to show their opposition to the planned overhaul of the main station. The project aims to make the city part of the longest high-speed rail line in Europe. 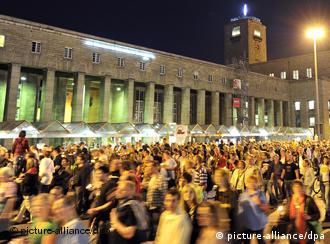 In the southern German city of Stuttgart, tens of thousands have protested against the planned reconstruction of the central railway station. Up to 30,000 people turned out for the demonstration on Friday, August 20, the biggest thus far.

Demonstrators marched in silence to the center of the city to rally against one of the biggest infrastructure projects in Europe.

Last week, preliminary work began to clear the exterior of the central station and make way for its transformation. The station will no longer be a terminus, but an underground through-station, so that trains do not have to go in and out, but can speed right through.

Supporters say this will reduce travel times, create around 4,000 new jobs and encourage investment. The aim is to make Stuttgart part of one of the longest high-speed lines in Europe - linking Paris, Strasbourg, Munich, Vienna, Bratislava and Budapest.

The so-called "Stuttgart 21" project, however, has caused controversy, because many feel it is too expensive. It will cost around 7 billion euros ($9 billion) to overhaul the station. Environmental campaigners say the new masterplan is unnecessary and that it will make only a limited change to rail traffic. The current rail station is a popular landmark in Stuttgart, and residents are worried about its becoming redundant.

The issue is set to be a major factor in March elections in the state of Baden-Wuerttemberg, which is currently governed by Angela Merkel's conservative Christian Democratic Party (CDU).

Deutsche Bahn's director of infrastructure has been forced out of the company after he refused to accept new bonus caps. Meanwhile, the rail operator's controversial Stuttgart 21 project has been given the green light. (10.12.2009)