Theologians Call on Religious Leaders to Respect Women | Europe | News and current affairs from around the continent | DW | 18.07.2008

Leaders of the world's major religions need to focus more on the needs of women, theologians told a Saudi-organized conference this week. 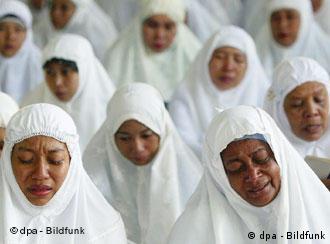 Religion needs to "restore the dignity of women"

The roundtable was part of the Saudi-organized World Conference of Dialogue in Madrid, which aims at promoting religious unity. It brings together 200 participants, including leading Christian, Muslim, Buddhist and Jewish thinkers.

"Women have been forgotten and marginalized in religions," Tamayo said as reported by the AFP news agency. "They are organized hierarchically and patriarchically, excluding women in all fields of knowledge and religious matters."

A variety of perspectives

Ahmad Ibn Saifuddin, a Saudi professor of theology, agreed that women's role had been misunderstood and that it was time to re-examine the issue.

"Eve was born from Adam, so women and men are the same," he said.

Esther Ruiz, a Protestant pastor and theologian, said that Christianity has promoted "repression and discrimination, which is expressed in the limited possibilities for women to fully develop the gifts God has given them..."

Amparo Ruiz, a lawyer and director of the Buddhist Center, told the seminar that Buddhism "makes no difference between men and women."

The Muslim World League organizes the conference as an initiative of Saudi King Abdullah, whose country hosts Islam's two holiest shrines in Mecca and Medina.

The conference has attracted top religious leaders including the secretary general of the World Jewish Congress, Michael Schneider, and Cardinal Jean-Louis Tauran, who is the Vatican's leader on dialogue between Christians and Muslims.

Church of England Allows Women to Serve as Bishops

The Church of England's ruling body, the General Synod, voted to allow women to be ordained as bishops. (08.07.2008)