A worldwide survey by Germany's Bertelsmann Foundation has found religion is as strong as ever among most of the globe's young people, with Europe the main enclave where religion is on the decline. 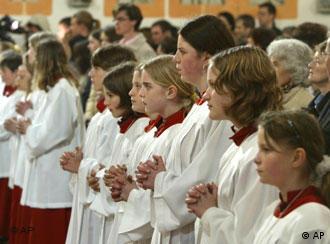 Even in Germany, a majority of young people consider themselves religious

Releasing details Thursday, July 10, the respected social-science foundation said the findings would surprise Europeans. It said the notion that young people were less religious than their parents was a typically European perception, not a global reality.

"Young people in developing countries and Islamic states are just as religious as adults," the study's authors said. "In Morocco, about 99 percent believe in God and life after death. Among Brazilians, Turks and Nigerians, 90 percent are believers and even in Israel, Indonesia and Italy, the rate is 80 percent."

Martin Rieger, who heads the Religion Monitor, a Bertelsmann project to track faith, said: "The notion that religion continuously declines from generation to generation can be clearly disproved, even in some of the industrialized nations."

The study found religious belief was stronger among young people in Britain and Israel than among their parents.

The first findings of the Bertelsmann Monitor of Religion, which will be continuously updated in future, were issued to mark World Youth Day, a Catholic youth festival being celebrated with Pope Benedict XVI in Sydney, Australia on July 20.

Globally, 85 percent of young people aged 18 to 29 are religious believers, with 44 percent defined as deeply religious in the sense that they often pray, discuss religious issues and are guided in day to day behavior by religion.

It's been around in the wings for several decades already, yet only recently has Buddhism begun to venture out towards mainstream German society. And it would seem that a growing number of people like what they see. (10.10.2007)

More information on the study on the foundation's Web site