Buddhism in Germany Finding New Adherents | Germany | News and in-depth reporting from Berlin and beyond | DW | 10.10.2007

It's been around in the wings for several decades already, yet only recently has Buddhism begun to venture out towards mainstream German society. And it would seem that a growing number of people like what they see. 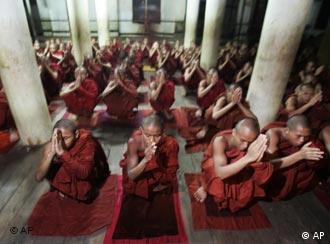 Although it is difficult to do a reliable headcount of the number of German Buddhists in Germany, the German Buddhist Union (DBU) estimates there are about 130,000 practioners. And there appears to be an increased interest in the religion in the nation's traditionally Christian population.

"We are definitely experiencing an upwards trend," said Helge Latenza of the DBU Head Office, "but it is a gentle curve." 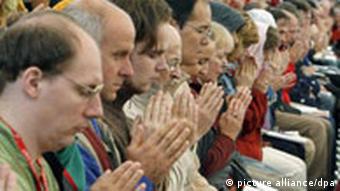 Gentle or not, significantly more Germans are turning towards Buddhism than are converting to Islam, an issue which has been creating waves throughout Germany lately. Last month, according to the Federal Interior Ministry, there were between 15,000 and 40,000 converts to Islam living in Germany.

So what is the reason for this growing interest in Buddhism, which is not even recognized as a religious body under German public law? David Schneider, one of the senior teachers of the Shambala Buddhist tradition, says one factor is that Buddhism is a particularly tolerant religion which is open to anyone.

"There have never been any Buddhist wars," Schneider said. " I think one of the things that people fear these days are extremist groups in all religions. Being the middle way, Buddhism is against extremism, you cannot be a Buddhist extremist."

The growing profile of the Buddhist way all over the world can at least in part be attributed to the Dalai Lama, the spiritual head of the religion.

"The media has taken a big interest in Buddhism partly because of his Holiness," Schneider said, adding that although he is often seen with world leaders and celebrities, he is a serious monk and practitioner who has not lost his compassion.

"People like a star and he is a star and a wonderful ambassador," he said. 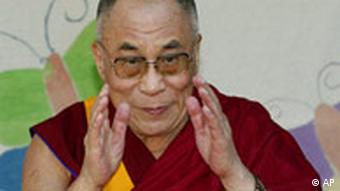 Inken Prohl, a theologist at Heidelberg University, agrees that the German fascination for Asia and Buddhism has much to do with the work and profile of the Dalai Lama, but believes that people are also looking for care and compassion and answers to questions their Christian backgrounds have been unable to provide.

"People are seeking ways to get on with their lives, looking for ways to cope," Prohl said, adding that the main churches neither address the body nor the senses in the way that Buddhism does.

"Appealing to the senses is very important," she said, "and Buddhism does this through meditation, physical exercise and simple aesthetics."

There is most certainly an en vogue element to Buddhism in Germany at the moment, but as Latenza from the DBU says that does not make it any less valid. "Some people may be interested on a superficial level, but the fact is that Buddhism does provide answers to today's problems," he said. "People want to learn how to live a happier life." 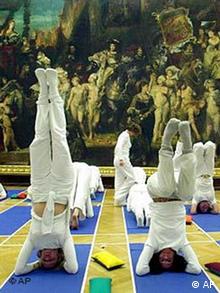 Buddhism calls for self-reflection, which fledgling practitioner Volker Wieprecht considers "an endlessly valuable gift." After almost two decades of rushing around trying out anything he thought might fill his life with happiness and meaning, he suddenly realized that he could find what he was looking for in what he describes as a "totally reliable philosophical system."

For Wieprecht, Buddhism means "much less drama and much more joy." But he also acknowledges that living the Buddhist way is a life-long project.

That is not the same for everyone, indeed Buddhism lends itself perfectly to the religious dabbler. Anyone is welcome and the extent to which one practices is determined solely by the individual.

But if Buddhism is something which one can dip in and out of, it is unclear how deep its roots in Germany will end up being, or if it will continue to enjoy growth. David Schneider believes that the trend might slow down once people realize the work involved in following the Buddhist path.

"Trend won't get you through. Even if the beautiful and famous people are walking the same path, everyone ultimately has to go it alone," he said. "But given the stresses of modern life, it has a lot to offer."

The Dalai Lama ended his 10-day visit to Hamburg on Friday with a call for more compassion and criticism of the actions of Chinese security forces in Tibet. (27.07.2007)

Do you think Buddhism is becoming more popular? Please include your name and country in your reply.