The world's longest rail tunnel: the Gotthard Base Tunnel

Switzerland has a new masterpiece of engineering: On June 1, it inaugurates the world's longest rail tunnel. The Gotthard Base Tunnel brings northern and southern Europe even closer together.

The Alps in Switzerland, from the Matterhorn to the Eiger, Mönch and Jungfrau are impressive. But no other mountain has the symbolic status of the Gotthard. There is even a local saying which states "no Gotthard, no Switzerland".

The Gotthard, once called a regal mountain range by German poet Johann Wolfgang von Goethe, is where the source of the rivers Rhine, Rhone and Ticino are located. It is also the most important link between the North Sea and the Mediterranean.

It comes as no surprise then if once again there is talk of "historical dimensions" and "pride of the nation," as the world's longest rail tunnel will be inaugurated on Wednesday (01.06.2016).

The 57-kilometer (35-mile) two-single track Gotthard Base Tunnel links Erstfeld in the Uri canton and Bodio in the southern canton of Tessin. The celebrations are scheduled to carry on for days. 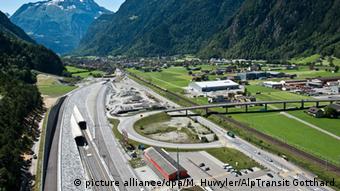 Near Erstfeld, the tracks vanish down into the mountainside

When it officially opens on June 1, the Gotthard Base Tunnel will overtake Japan's 53.9-kilometer Seikan Tunnel as the world's longest train tunnel and bump the 50.5-kilometer Channel Tunnel that links England and France into third place. This monumental construction came at a cost of some 12 billion Swiss franks ($12 billion, 11 billion euros).

A federal government can only spend that sort of money if it has the backing of the population. A November 1998 referendum saw 64 percent of Swiss voters approving the final plans to construct the tunnel along with funding schemes, including a new road tax.

The first train to pass through the tunnel on its official opening day will not be filled with dignitaries but rather with average Swiss citizens - those fortunate enough to have won tickets at a national lottery. The second train is set aside for politicians and state guests, among them German Chancellor Angela Merkel and Italy's Prime Minister Matteo Renzi. 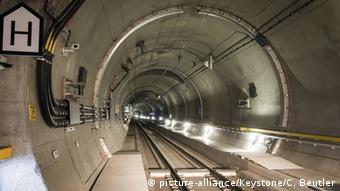 The Gotthard Base Tunnel took 17 years to construct

A masterpiece of engineering

The new Gotthard Tunnel isn't merely the world's longest but, with up to 2,300 meters of rock above it, also the deepest traffic tunnel and the first flat low-level route through the Alps, with a maximum height of 550 meters (1,804 feet) above sea level.

The idea to build this tunnel was born 69 years ago: Swiss engineer Eduard Gruner first came up with the concept in 1947. Gruner predicted the visionary project could be finished by the start of the 21st century - and he turned out to be off by just 16 years.

Some 2,400 workers, many from Germany, constructed this new rail link between the North Sea and the Mediterranean. More than 28 million tons of rock had to be excavated from the mountain near the Gotthard pass to create the total of 151.84 km (94.3 miles) of tunnels, shafts and passages. 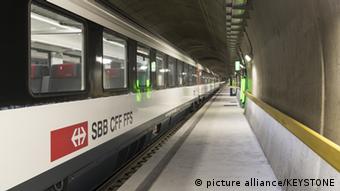 The tunnel will shorten journeys for people and goods

Now that trains will run on a specially constructed, almost entirely flat track through the tunnel, they'll be able to reach speeds of up to 250 kilometers per hour (155 miles). This will slash the journey time between Zurich and Lugano by 45 minutes, making the trip possible in just two hours. These figures will surely excite a nation like the Swiss who, with some 2,300 kilometers travelled by rail every year, are already world leaders when it comes to train travel.

Rather than greater comfort to rail travelers, the main purpose of the new route is to make rail freight more efficient by increasing total transport capacity across the Alps, helping shift freight volumes from road to rail to reduce fatal crashes and environmental damage caused by ever-increasing numbers of heavy trucks. Some 260 freight trains will be able to pass through the Gotthard mountain range every day, rather than the current maximum of 180.

Despite Wednesday's opening, it will still be a while before full service begins. It is expected to start in December, just before Christmas, after the rail link has passed a further 3,000 test drives. Only then can the old Gotthard Tunnel, which dates back to 1882, be officially retired.