Football fans love to sing, no matter what the score is - and apparently some players do, too. Here are some of our favorite classic soccer songs to get in tune for Euro 2016. 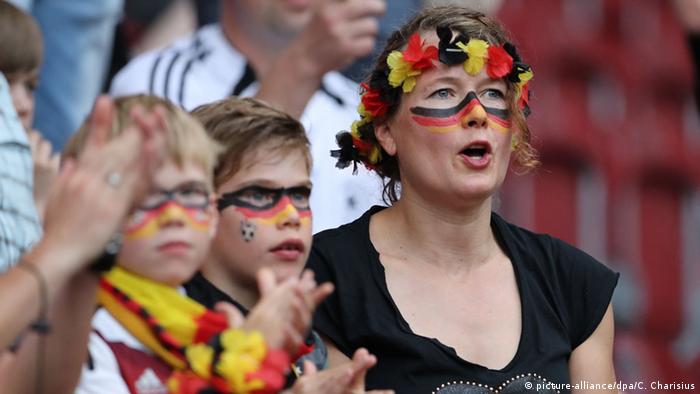 Soccer isn't just associated with sweat, tears and beer - but also plenty of heart-wrenching tunes. Emotion and entertainment are happening out there on the pitch and, like any good film, that calls for a suitable soundtrack.

The British fan songs are particularly famous, even though the national team often goes home empty-handed from international competitions. But England is considered the cradle of football itself - and that's also true for fan songs.

Well-known pop melodies like "Yellow Submarine" by the Beatles, "Que Sera Sera" by Doris Day, or "Go West" by the Pet Shop Boys often form the basis of a catchy fan song. The tunes are pimped with freshly coined texts - which can vary depending on the score and the opponent.

Even in Germany, these melodies are part of the standard repertoire. Schalke 04 fans have decorated the "Go West" melody with their own text: "Steh auf, wenn du ein Schalker bist" - "Stand up if you're a Schalke fan."

Four years ago at the Euro 2012, football fans really shone with their musical skills - particularly during the preliminary match between Spain and Ireland. In the 87th minute, Ireland was trailing 0:4 when the Irish fans joined together for their anthem, "The Fields of Athenry," a song about famine in Ireland in the 19th century.

With 20,000 voices singing out in the Gdansk stadium, even after the final whistle had been blown, television commentator Tom Bartels was so moved that he was - quite literally - at a loss for words.

Every football club has its own anthem. And here, as well, England leads the pack, also being home to some of the greatest pop stars of all time. Either existing pop tracks are converted into soccer ditties, or stars write their own songs especially for the stadium. There's "Three Lions (Football's Coming Home)" from Lightning Seeds, or, of course, "You'll Never Walk Alone" by Gerry and the Pacemakers.

From Liverpool band Gerry and the Pacemakers didn't write the hit song, which was originally from the Rogers and Hammerstein musical "Carousel," but covered it in 1963 - shooting the number to world-wide fame. At some point, fans of FC Liverpool started singing it in the stadium and have kept up the tradition, both in victory and defeat.

"You'll Never Walk Alone" has also been adopted by numerous other football clubs in Germany, Europe and beyond - including Borussia Dortmund. In March, a fan passed away after suffering a heart attack in the stadium during the game. All the spectators joined together in a rendition of the emotional song, even as the game continued down on the field.

The birth of a classic

Since the Euro 2008, "Seven Nation Army" by American band The White Stripes (2003) has been a soccer staple. It was Belgian football fans that brought the number to the stadium in Bruges during the 2003/2004 Champions Leagues season. Fans of the opposing team liked the tune and kept it alive.

Italian soccer spectators sang "Seven Nation Army" at the World Cup in Germany in 2006. Two years later at the Euro 2008 in Austria and Switzerland, the number was played at every entrance of every team - and the next soccer classic was born.

When a goal is scored, at least two things happen: the commentator elongates the otherwise short word and the crowd bursts into song.

For this joyful occasion, some clubs in Germany draw on their rich local culture and make use of Carnival songs. Fans of 1. FC Köln - Cologne is the center of Carnival culture in Germany - sing "wenn dat Trömmelche jeiht" in their local dialect, while Mainz fans cheer to the tune of "Narhalla Marsch."

But Carnival doesn't play a role everywhere in Germany: FC Bayern fans sing "Seven Nation Army," while Bayer Leverkusen crowds break out in "Rockin' All Over the World" by Status Quo. In Milan, Van Halen's "Jump" can be heard, and in St. Paul and Salzburg, "Song 2" by Blur is the tune of choice.

"Chelsea Dagger" by the Fratellis is also a favorite in many countries, and VFB Stuttgart and Dutch club Vitesse Arnheim go with punk number "Bro Hymn" by Pennywise.

Drunk, chanting football fans can be difficult to tolerate, especially towards the end of the game, but what have we done to deserve singing performances by the soccer stars themselves? (Sorry, guys.)

Over the years, various German national teams have been invited (or coerced) into the recording studio to make music with German folk pop stars like Udo Jürgens, Peter Alexander and even Eurovision winner Nicole. They were expected to create an unforgettable moment on national television - but often ended up missing the beat and the pitch. This video is from the 1974 national Mannschaft - which, coincidentally, also won the World Cup that year.

But the embarrassment didn't stop in 1974. German pop and rock bands decided that it would be exciting to pick a famous player and give him a solo on one of their songs. The band Sportfreunde Stiller got star striker Roque Santa Cruz, who played for FC Bayern for eight years, to chime in on his namesake "Ich, Roque" in 2004. In 2010, Mesut Özil teamed up with Jan Delay and rapped on "Large."

The "soccer star meets pop star" trend took off internationally as well. English striker Kevin Keegan landed in the charts in the 1970s with the schmaltzy pop song "Head Over Heels in Love." And even Portuguese megastar Cristiano Ronaldo got romantic in the bossa nova number "Mi Amor."

Those are quite big shoes to fill for this year's squad. But first, let's see how they fair on the soccer pitch before they attempt the high notes.

DW presents a Spotify playlist of soccer classics to gear up for Euro 2016.

Learn to speak like a Weltmeister! With the Euro 2016 running from June 10-July 10, it's time to polish our football vocabulary. Here are 11 soccer words to help you follow along with the European Championship in German. (07.06.2016)

Could a soccer game bring peace to the Middle East?

What would happen if Israel and the Palestinian Terrorities solved their decades-old conflict with a winner-takes-all soccer game? A new Israeli-German film poses this absurd question - with entertaining results. (06.06.2016)