Industrialist's son and revolutionary thinker: Friedrich Engels, who co-wrote the Communist Manifesto with Karl Marx, was born 200 years ago in Wuppertal. A day of celebrations and protests. 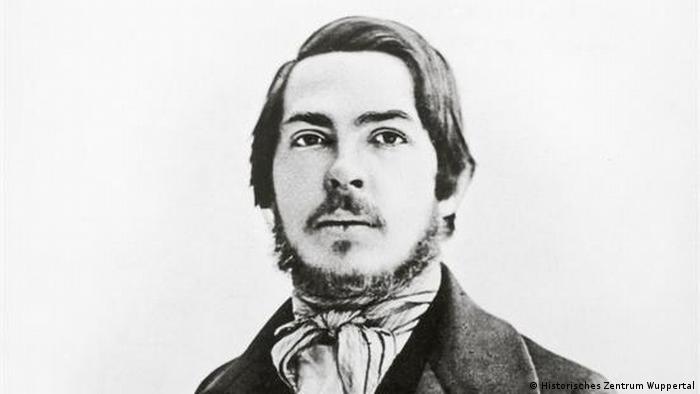 Friedrich Engels in his late 30s

Friedrich Engels was born on November 28, 1820, into a world on the cusp of change. The industrial revolution was spreading out from England like a wildfire. Armies of workers were rising up.

Engels' hometown of Barmen (now incorporated in the city of Wuppertal) was no exception. His father owned textile factories there and in Manchester, in England's industrial north. The industrialist's son, who studied and knew exactly how capitalism worked, would become — next to Karl Marx — its most famous critic. 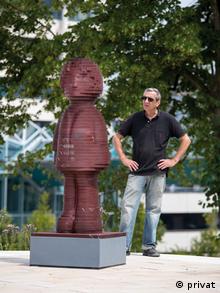 A contradiction? Definitely a surprising turn, which fascinates many to this day. "For me Engels is bipolar," says Eckehard Lowisch. The sculptor from Wuppertal has designed a sculpture of the philosopher, sociologist, and revolutionary for his 200-year anniversary.

He was "a man who could enjoy shrimp and champagne in the morning and take a stroll through the poor working class neighborhoods of Manchester with his girlfriend in the evening," according to Lowisch, "both a capitalist and a revolutionary — in any case he had a great sense of social justice."

Early struggles with his father

As the eldest of nine children, Friedrich was his father's chosen successor. He took his son out of school shortly before graduating so that he could take up a commercial apprenticeship. But the father and son often knocked heads. The contradiction between the pious religiosity and the capitalist greed bothered the young Engels.

Under the pseudonym Friedrich Oswald he published the Letters from Wuppertal, his first social critique. "A terrible misery reigns over the lower classes, especially the factory workers in Wuppertal," wrote the 19-year-old Engels, as eloquent as he was radical.

"In Elberfeld alone 1,200 out of 2,500 children have been taken out of school and are growing up in the factories to replace adult workers, just so that the factory owner doesn't have to pay an adult double the wages that he has to pay a child."

But what fueled the young Friedrich? Following his apprenticeship he voluntarily completed his military service with the royal Prussian artillery guard in Berlin. As a guest student he attended university lectures on philosophy, Asian languages and finance, and socialized in left-wing intellectual circles. In Cologne in 1842 he first met Karl Marx, then editor-in-chief of the Rheinische Zeitung.

Engels' father summoned him to his cotton mill in Manchester. Here he met the young Irish woman Mary Burns. Together with his future partner he would wander through Manchester's working class neighborhoods. He got to know the inhumane living and working conditions of the textile workers and committed his impressions to paper in the social study The Condition of the Working Class in England. 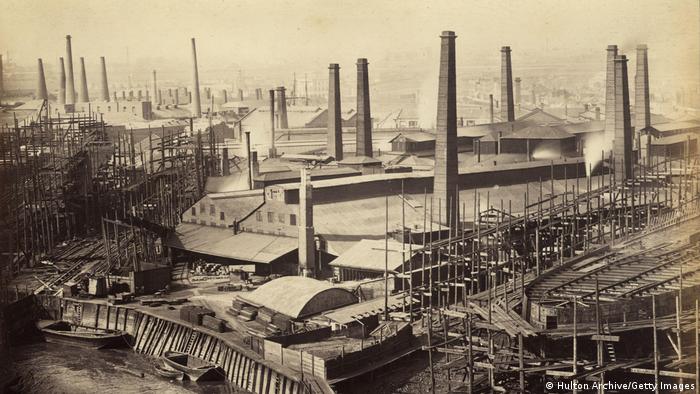 The Industrial Revolution also meant a boom in factory construction, such as this one in London, 1867

He observed that in many cases family order was turned upside down, the women working in the factories while the men sat at home minding the children, cooking and cleaning.

His work brought him ever closer to Karl Marx, who had meanwhile emigrated to Paris. Engels began to write for the German-French Annals, a journal published by Karl Marx and Arnold Ruge.

When the first communist meetings were held in Elberfeld in 1845, Engels gave speeches there. Together with Marx, he moved to Brussels, then traveled with him to London and Manchester. In London in 1847 they joined the "League of the Righteous," later the "Communist League" — for whom, a year later, they wrote the Communist Manifesto.

"Without Friedrich Engels," says historian Werner Plumpe from the University of Frankfurt am Main, "much of Karl Marx's writings would never have appeared."

Plumpe said in an interview with public radio broadcaster Deutschlandfunk that it was only through Engels' involvement that they became political statements. And without his money, Marx would have died of starvation.

"The Communist Manifesto is a collaborative effort, most of which was written by Karl Marx, but what's most important comes from Engels, which you can still see in his writings today. In other words, this willingness to formulate a clear political statement and then to say it and also to defend it vigorously, that runs through the Communist Manifesto," Plumpe said. 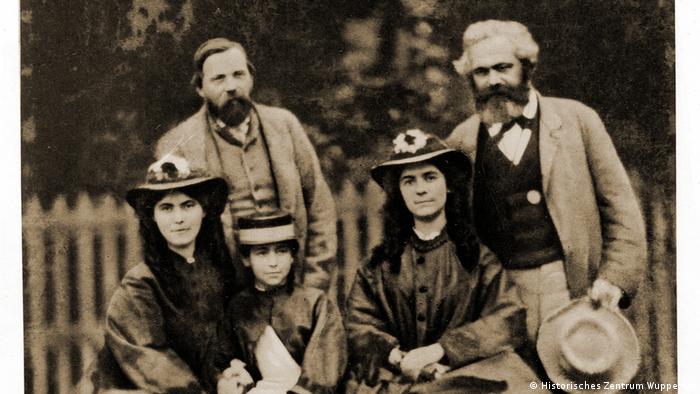 Friedrich Engels (left) and his friend Karl Marx and his daughters, probably in the 1860s

In the spring of 1849, as revolutionaries and workers went to the barricades in Barmen and Elberfeld, Engels was there. Later he also appeared at the Baden uprising. After the movement was crushed, he fled to Switzerland and on to England, where he worked as an statutory clerk from 1850 and later as a partner in his father's company.

Engels gave his friend Marx a helping hand financially, as well as with his publications. It’s often impossible to tell whose pen is behind the words.

Engels, for example, edited volumes two and three of Marx's main work Das Kapital posthumously from notes. In 1869, after he was able to sell his company shares, Engels moved to London to be with Marx.

After Marx's death in 1883, Engels became a leading figure in international Socialism. Especially respected by the German Social Democrats, Friedrich Engels is also revered in China.

Engels' birthplace has proclaimed 2020 an "Engels Year" and is creating a living memorial to Wuppertal's most famous son — from a community festival, concerts, exhibitions, tours and discussions.

Due to the corona pandemic, most of the birthday celebrations had to be canceled, including the reopening of the historic Engels House. But many events are taking place online so that November, according to the organizers, is "contact-free, but not Engels-free."

An Engels sculpture unveiled, another one covered up in protest

Engels is now reappearing in Wuppertal in the form of a life-sized sculpture. The multi-layered figure of marble slices is the work of sculptor Eckehard Lowisch.

But on the day of Engels' 200th anniversary, another existing sculpture of the thinker temporarily disappeared: A four-meter-high (13-foot-high) bronze that had been given to Engels' hometown by the Chinese government in 2014 was covered up in solidarity with protesters in Hong Kong. 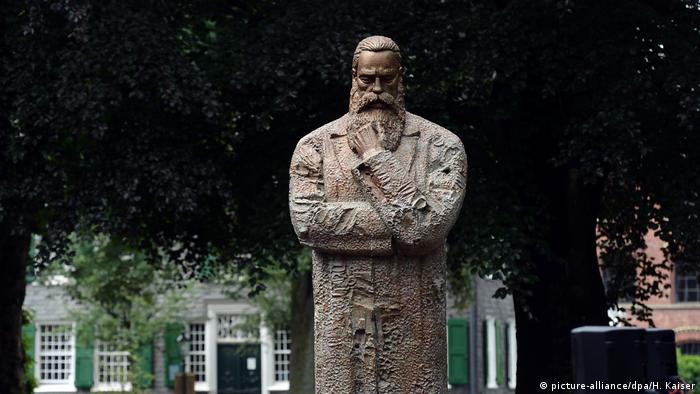 Organized by two literary societies, the Else-Lasker-Schüler and the Armin T. Wegner association, the demonstration aims to highlight the plight of activists in China by displaying photos and reading works of persecuted authors, including poems by the late Liu Xiaobo, the Chinese dissident who received the Nobel Prize while in prison.

"China suppresses freedom of speech, thought, information and assembly," wrote the organizers of the event in a statement. "Engels would be in prison or under house arrest in China today. He would be banned from his profession like thousands of Chinese authors, artists and bloggers."

This article was translated from German by Carl Holm.

Is it possible to say from what we know today whether Marx's analysis of capitalism and his explanations of the economic machine are basically either correct or incorrect?

Karl Marx's legacy is ambivalent: while his ideas made Marx the spiritual father of the labor movement, they have also been used as justification for tyranny. Still, he is celebrated around the world as a cultural icon.

What is wage labor?

Karl Marx on the streets of Berlin