From Wuppertal to China with a camper van

"The Far East in the fast lane" is the title of the new book by journalist and truck driver Jochen Dieckmann. It chronicles his adventurous journey, which he undertook in 2019 along the new Silk Road.

Along the Silk Road

In one of the photos Jochen Dieckmann brought back from his trip around the world, he can be seen wearing a black T-shirt with the inscription: "Doing is like wanting to do, only more extreme." This slogan sums up Dieckmann's attitude: Get in the car and just drive off. No discussions. Dieckmann decided on the timing, too. "I was determined to celebrate my 60th birthday in China."

Of course, you need to do some preparations, get the necessary papers and visas. Arranging for time off for half a year also helps. Because from Wuppertal to Chengdu it is almost 8,000 kilometers (4,971 miles) — as the crow flies, of course. With a camper van it's easily three times as much. You can't do that in a month. 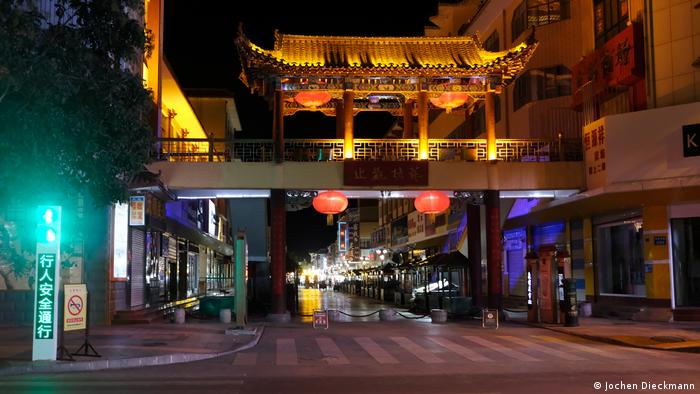 And yet it makes no sense to over-think such a project. To consider all the things that could go wrong, the diseases that could be contracted or the amount of bribe money that you might have to pay out in order to keep moving, Dieckmann tells DW. "Actually, that didn't happen too often," says Dieckmann. "Only twice in Kazakhstan. There they demanded money for nothing."

Later, he and his fellow traveler, his 29-year-old nephew Pablo, successfully avoided being ripped on several occasions. "When you drive 25,000 kilometers, you not only get to know your vehicle, but also what to watch out for in Baksheesh bribe bartering situations." It is often enough to ask police officers who are demanding payment for a receipt and to take photos of their vehicles, on which the license plates can also be seen. 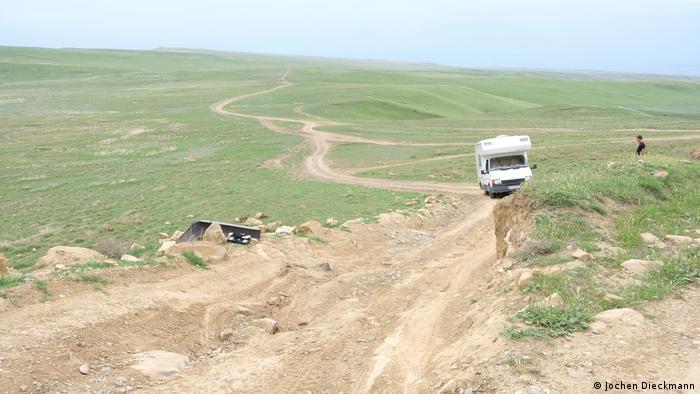 "Roads like this were the reason why the camper kept breaking down."

"Most of what people in this country (Germany) say and think when you mention China reminds me strongly of the Cold War era," Dieckmann writes at the beginning of his book. It is a mixed bag of clichés that Europeans have accumulated about the people from the rising power in the Far East.

But wait, we haven't even set off yet. Why this harsh treatment of those who criticize China so early in the book? Because he fears, says Dieckmann, that the prevailing prejudices against the Middle Kingdom are so widespread that hardly any reader will be able to keep an open mind while the journey brings them closer to this country — page after page, kilometer after kilometer. 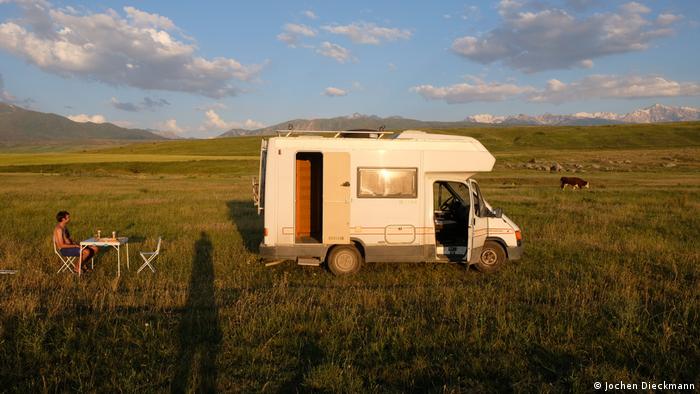 An evening in Kazakhstan. Camper's bliss in no man's land

Foreign cultures and a meat-based cuisine

And then finally the journey begins. On page 28 the camper van crosses the border between Hungary and Ukraine. Then on over the Black Sea to Georgia and Azerbaijan. Across the Caspian Sea to Kazakhstan, Uzbekistan and Kyrgyzstan. And finally, over the border to China.

Speaking of 28, that's also the ripe age of the Ford Transit that Dieckmann bought for his trip. The things that happen to the camper alone would probably provide enough material for several travel presentations. Dieckmann does mention punctures but talks much more enthusiastically about shattered wheel bearings and even a gearbox, "which at some point just said good-bye." But at least only once the country of destination had been reached.

The journey in the book takes the reader through valleys and mountain passes, through deserts and forests, past mud volcanoes, oil and cotton fields, a football European League final in Baku, a ship graveyard on the dried-up Aral Sea and deep into foreign cultures.

On the way there are specialties like chanachi (mutton stew with eggplant) or khachapuri (white bread filled with cheese and garlic), but in the former Soviet republics they mostly serve all varieties of shashlik. Meat skewers as the staple food, for weeks. Vegetarians be warned. 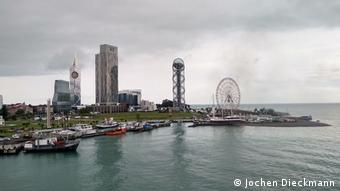 Skyline of Batumi on the Black Sea, Georgia

China - caught between awakening and oppression

When he talks about his impressions at the finish line in China, Dieckmann is full of enthusiasm: "Skylines that you normally only know from American cities, motorways that are wonderful to drive on, or the quality of Chinese technology products whose engineers have long since stopped having to reproduce Western standards."

China is not a country that worries him, says Dieckmann. "They haven't been involved in a single war in the last 40 years." The extraordinary presence of security forces in the province of Xinjiang, where the Muslim Uighurs also live, however, made him feel "uneasy." Here China showed itself in a light that made you want to "leave the country." 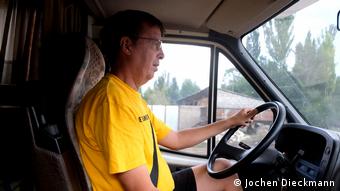 Over nearly 270 pages covering several months of travel, many a reader may catch themselves yearning for faraway places and find their soul dripping with envy. Especially now, when for most people in times of the coronavirus, the most exotic trip they can embark on is a stroll across the hallway to the balcony overlooking the backyard.

This book is not a travel guide, but a personal journal. It conveys very subjective impressions. Some superficial, some entertaining and haunting, but never dangerous or threatening. A bad back and the omnipresent mosquitoes turn out to be the biggest nuisances on this trip. Anyone who asks Jochen Dieckmann how this journey has changed him will be met with a satisfied sigh. "You realize what is important and what is not," he says. In situations where he used to get upset, for example when another driver cuts him off, he now remains calm and composed.

Coronavirus could force China to rein in Belt and Road ambitions

Domestic economic challenges due to COVID-19 are likely to force China to dial back on big-ticket infrastructure projects. But Beijing will not shy away from bankrolling virus-hit countries to score geopolitical gains. (17.04.2020)

"Every artist is an activist," says Ai Weiwei, who presents himself as a conceptual artist and a writer. He addressed his relationship to Germany at his recent book launch in Berlin. (07.11.2019)

Along the Silk Road

Uzbekistan stretches between the Gissar Mountains and the Aral Sea. The country is characterized by seemingly endless sandy deserts and oases, and was once one of the most important powers in the region.

Follow our European adventure and participate in our giveaway to win a DW travel kit!