The race to e-mobility

German automakers are promising to ramp up electric vehicle production, while Paris and London are pledging to go all-electric by 2040. So why is China beating Europe at the e-mobility game? 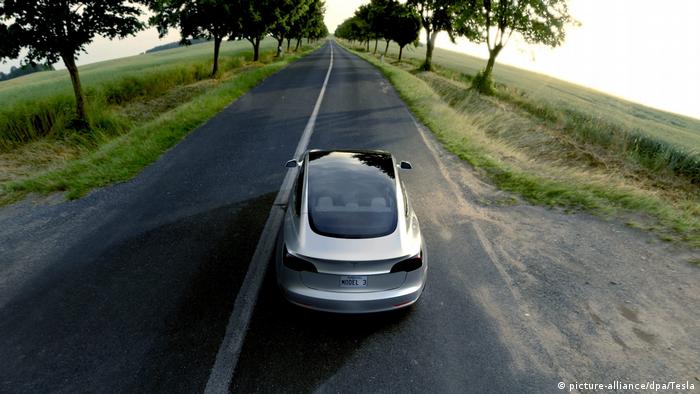 As German automakers emerged from their crisis talks on diesel with the German government in Berlin this week, they were full of promises.

They are facing enormous pressure after ongoing revelations that they have been cheating on emissions testing for diesel cars.

It now turns out that diesel, the vehicle technology favored by Europe for the past two decades, is much dirtier than the automakers had let on. Now, German automakers say, they will clean up their act and invest in developing electric vehicles.

Such a shift, automotive analysts observe, is long overdue. Though governments have been putting incentives in place to encourage automakers to ramp up development, car companies in Europe and America have been slow to do so.

Recently, both Paris and London announced plans to make their city centers combustion-engine-free by 2040. It is an ambitious goal, considering that electric vehicles currently make up only 1 percent of vehicle sales in the United Kingdom.

Despite the lofty goals and promises, these countries still have a long way to go before widespread uptake of electric vehicles - and there is skepticism as to whether the 2040 goals can be met.

"It's feasible but incredibly ambitious," says Jim Holder, editorial director of What Car?, a UK-based automotive magazine. "The car industry has always proved adept at hitting the targets it's given - but the car industry alone can't solve issues like infrastructure, tax incentives and the like." 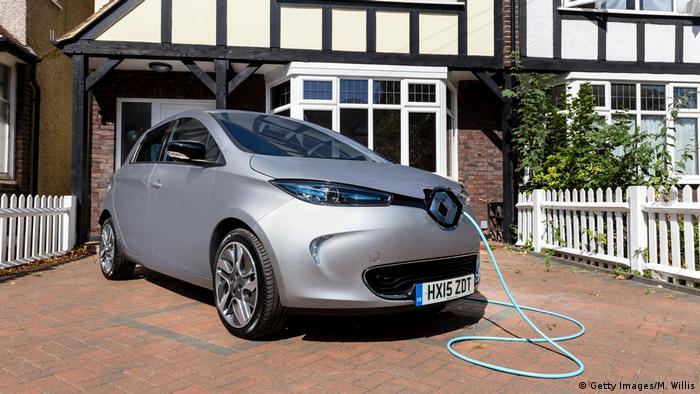 Holder himself drives an all-electric vehicle, and charges it at his home outside London every night. He knows first-hand the frustrations that electric vehicle drivers now face.

"The thing that sometimes puts me off using our car, is not knowing whether the charging points are going to be working when you get there," he says.

Uncertainty about functional and available charging points is among the main barriers consumers face when considering whether to go electric, he thinks. "And when there's [fossil fuels] that have been around for a hundred years, you can see why people might pick that."

China pulls ahead in global race

Europe is, in fact, falling behind in the e-mobility game.

China has pulled ahead of both Europe and the United States - thanks to the rapid introduction of charging infrastructure and a policy initiative to set a quota requiring 10 percent of all new vehicles sold to be electric from 2018 onward.

"You can see that the market for electric vehicles is much more dynamic in China than in Europe right now," says Yoann Le Petit, an e-mobility expert with the campaign group Transport & Environment in Brussels.

"Regulation will really decide whether countries are laggards or forwards in terms of electromobility," he points out. Electric vehicle uptake is conditional on a four main elements: fiscal incentives, adequate charging infrastructure, consumer awareness and market availability.

And all of that is developing quickly in China. 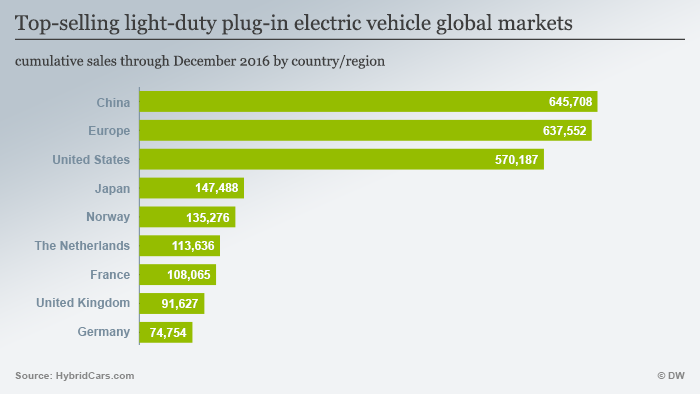 India has also introduced a quota for phasing out diesel and petrol engines, and is considering legislation to go all electric by 2030.

But Holder cautions that the quota approach probably won't work in Europe and the US. "The issue in Europe and America is that the customer doesn't want an electrified car a lot of the time at the moment."

Attempts to introduce quotas in these countries could result in public anger.

He adds that China has extra motivations for pushing electric cars not present in Europe. "China has its own motivations," he said. These motivations have above all to do with what raw materials it does and does not have easy access to.

With pollution as a major public health issue in China, "electric cars suit it very well," he told DW. "People use their cars in different ways in China - you don't necessarily set out across China on a long trip, people mostly stay in cities." 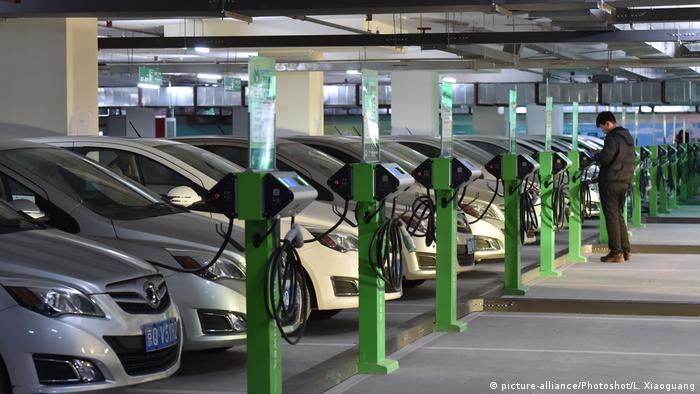 Benjamin Stephan, a mobility campaigner with Greenpeace, notes that the Chinese growth is still good news for Europe because a rising tide lifts all boats.

The German automakers that account for the majority of European auto sales - and which are currently at the center of the Dieselgate scandal - should look to the growing market in China, he thinks.

"German automakers are reluctant to go all-in on electric, because until recently they were really making good money on diesel and petrol engines," he pointed out.

Although their profits would be less in the transition time to electric, "German automakers really depend on their exports."

"With what China and India are doing, if the Germans don't get into electric quickly, this country will no longer be the car factory of the world."

But not every country in Europe is a laggard. Norway now leads the continent in electric vehicle sales, with 24 percent of vehicles sold last year being electric. This is thanks to a tax incentive system that has been in place for many years - and significant investment in charging infrastructure.

Le Petit says Norway's policy initiatives are a good example to follow - but with a pinch of salt. "The incentive system is costly, and that won't be reproducible in every country. You couldn't do it in a country with 60,000 inhabitants."

He notes other countries have also made great strides. France and the Netherlands have made substantial progress setting up charging infrastructure, he says.

But development has been uneven - not only within Europe, but also in the US.

As part of its ambitious pollution- and emission-reduction goals, California has a zero-emissions vehicle mandate and a complex system of credit obligations on vehicle manufacturers. The state estimates that by 2025, 15 percent of all vehicles sales in California will be electric, up from 3 percent today.

But California is alone in the US with regard to e-mobility. No other US state has imposed mandates, and tax incentives for buying electric vehicles are meager. Such patchy ambition will not give the national automakers the signal they need to make a big push into electric, Le Petit says.

For his part, Holder believes that though it has been slow going, the overwhelming momentum is toward electric. "The car industry is capable of applying both their budgets and their brainpower to hitting these targets," he says.

Full speed ahead for electric cars - it seems there has never been a better time to finally do away with combustion-engine technology. But DW's Henrik Böhme feels the solution lies elsewhere. (27.07.2017)

VW's core brand Volkswagen is aiming to become the world's leader in electric cars by 2025. The company hopes its strategic clean-energy ambitions will make people forget about its emissions-cheating scandal. (22.11.2016)