Full speed ahead for electric cars - it seems there has never been a better time to finally do away with combustion-engine technology. But DW's Henrik Böhme feels the solution lies elsewhere. 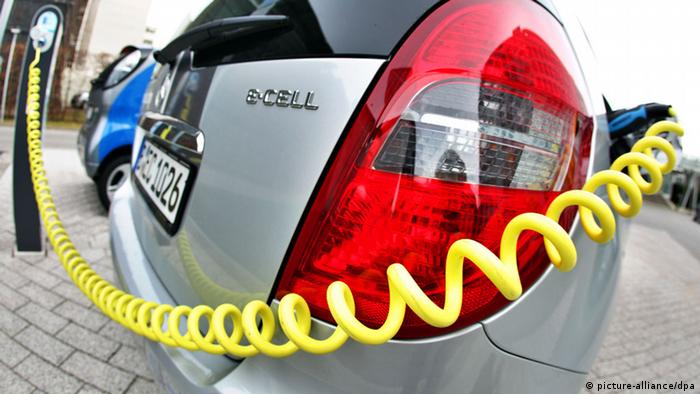 They really are the bad guys, those carmakers! Ever since Germany's flagship industry was confronted with accusations of colluding in a cartel, a lot of malice has been directed toward manufacturers in Wolfsburg, Stuttgart and Munich. Understandable, given that there is not much faith left in Germany's car industry since VW's emissions-cheating dieselgate scandal erupted.

The companies themselves are keeping a low profile. That is also understandable as investigations by competition authorities have only just started and the suspects remain innocent until proven guilty. In addition, every misplaced word uttered in public may eventually cost the firms millions. The only ones left speaking will most likely be the lawyers.

Naturally, the self-proclaimed opponents of cars - and combustion engines in particular - are having a field day. Their mutual enemy, the fossil-fuel polluters, are finally about to bite the dust. So be it.

But somehow there are parallels to be drawn with the troubled Energiewende, or transition to clean energy in Germany. That has so far been a bottomless pit of money, state-commissioned and highly subsidized.

Nonetheless, many German solar energy companies are going bust right now. And nobody wants to have a windmill in their back garden either. Public resistance to new power lines is mounting.

Talking about combustion engines, you're faced with the same sort of questions that people ask about the energy transition.  Where will we get enough electricity from when all conventional power plants have been taken off the grid?

Read more: Court to decide on the future of diesel cars in Germany

E-car? No solution either!

As far as cars are concerned - what sort of vehicles are we supposed to use when combustion engines are banned? E-cars to the rescue as many are quick to suggest? There is a real snag. No one really knows whether this is a feasible solution at all. The ecological footprint of e-cars is disastrous.

You can drive a typical Mercedes E-class for eight years before you do as much damage to the environment as a Tesla. One of the reasons for this is the super-heavy batteries used in electric vehicles.

Millions upon millions of e-cars also means millions upon millions of such batteries. Raw materials such as lithium and cobalt are in high demand. But where does cobalt come from? Well, at least to an overwhelming extent it come from the Democratic Republic of Congo (DRC), a nation rocked by civil war and large-scale corruption. It's mainly child laborers who have to dig out the ore. But without cobalt from the DRC you can forget about any fantasies about e-cars.

Poisons and dangerous particles are a side effect of the production of batteries, let alone the tons of carbon dioxide produced. And in the end, millions of batteries have to be disposed of and then hopefully recycled. Otherwise it is toxic waste.

So, maybe the electric car represents nothing more than a stopgap measure . And maybe the fuel cell will eventually emerge as the big winner. Many "maybes" here, but no one can really know right now. Not a car guru, not a head of research at a carmaker.

We will probably have to tackle the transportation issue from a different angle. What about more streetcars and e-buses in city centers? Why not electrify our highways to hook up trucks and coaches to overhead lines. It wouldn't exactly be a new invention.

But a look at how amateurishly Germany has gone about its energy transition tells me there's little hope we will succeed in a thorough overhaul of the transport sector. And definitely not as long as those bad guys from the auto mafia are in the hot seat.

Daimler CEO: 'Diesel is worth fighting for'

Opinion: Empty stadiums are illogical but football is a populist pandemic punch bag 23h ago