The Queen of Dakar

Jutta Kleinschmidt was the first woman to win a stage of the Paris Dakar Rally, the toughest cross country rally in the world. This year she was elected woman athlete of the year. 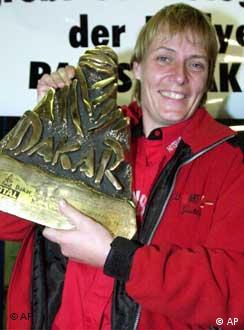 A proud moment - Jutta Kleinschmidt shows off her trophy after winning the Paris-Dakar rally in January, 2001.

When Jutta Kleinschmidt began her career, coffee pot and baking trays shared the space on her kitchen shelves with cylinder heads and other biking equipment, and her bike still had to be repaired at home in her flat.

Now, the 39-year-old is a leading figure in the world of cross crountry rally racing and the first women to win the toughest race yet - the Paris-Dakar Desert Rally.

Kleinschmidt started her cross country career as a spectator. In 1987, she followed a desert rally on a motorbike. Six months later she took part in the Pharaos Rally in Egypt – this time as a competitor.

"At the start you're just a small fry somewhere at the end of the race fighting only to survive. To finish. That's the biggest goal you have when you begin. I didn't have a pit team, nothing really. I just threw a box on the truck and took off on my motorcycle. I thought I would manage somehow,"she says modestly.

But in 1992 she won the Paris-Dakar desert rally Ladies Trophy. By this time she had decided to become a motorsport professional and give up her job as an engineer. A short while later she tackled her first desert rally in a car – as rally-expert Jean Louis Schlesser’s co-driver.

In 1996, Jutta Kleinschmidt was the first woman to win a stage of the Paris Dakar Rally. Competing in a single seater was both a chance and a challenge: she had to drive and navigate at the same time. But it was in 2001 that Kleinschmidt made a major breakthrough by winning the Paris-Dakar rally with co-driver Andreas Schulz.

Ten thousand kilometers from Paris to Dakar in only 21 days: the Paris-Dakar Rally is the most grueling and adventurous car rally in the world. Crashes, injuries and even deaths are all part of the challenge.

Her victory in the desert made Kleinschmidt Germany's most famous female racing car driver. This year, television viewers elected her woman athlete of the year.

Even during breaks, Germany's most successful woman race car driver keeps her foot on the accelorator. Last year she founded the "Desert Academy", a week of intensive driving courses during which Kleinschmidt reveals her secrets about racing through sun and sand.

"I simply want to pass on to people the experiences I've had in the desert .... I don't think anybody who just comes here would experience these things alone. They just wouldn't have the chance if they were by themselves," she says.

Jutta Kleinschmidt is now back in the desert, training in Tunisia for the twenty-fourth Paris-Dakar race. The Queen of Dakar is ready to defend her title on January 13th, in the most demanding motorsport event on earth.