The Pope′s Philippine visit and the politics of religion | Asia | An in-depth look at news from across the continent | DW | 15.01.2015

Most Filipinos consider Pope Francis' visit to their country a blessing. Religion and politics are intertwined in the majority-Catholic island nation, and most of the time it is difficult to separate them. 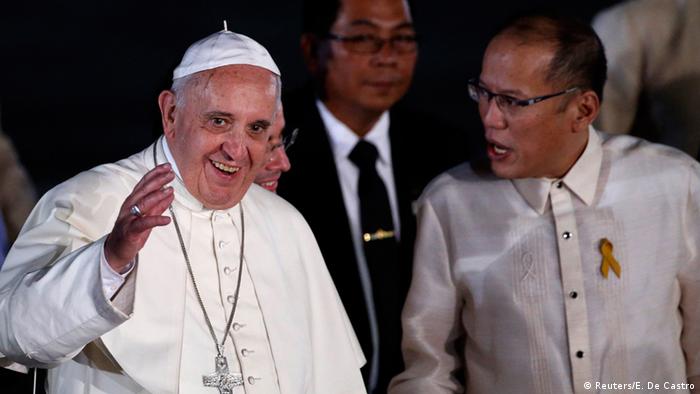 "The Lord is our absolute priority. Whatever we do, he always comes first - even if someone falls ill in the family," says Dolores Pascual, holding her rosary's cross in her hands.

Every night, the 72-year-old lady sits around a tiny altar in her small hut in Tatalon, a Manila suburb, along with her husband, children and grandchildren.

The Philippines has been the bastion of the Catholic Church in Asia since the 16th century, when it was conquered by the Spaniards. Alongside East Timor it is only Catholic-majority Asian country. More than 80 percent of its population is Roman Catholic. It is not a surprise, therefore, that most Filipinos see the Pope's visit as a blessing.

"We love the Pope because he prefers the poor. This touches us," Dolores told DW with tears in her eyes. 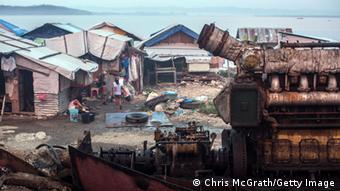 The Pope will also visit Tacloban, which was devastated by Typhoon Haiyan in 2013

The motto of the Argentine pontiff's Asia visit is "mercy and compassion." Besides the capital Manila, the Pope will also visit the city of Tacloban which was devastated by Typhoon Haiyan in 2013.

The government declared the Pope's five days in the country public holidays. The visit by the head of the Church dominated the Philippine media. There is high security in the capital Manila for Francis, who is the Pope to have visited the Asian country.

Pope Francis arrives in the Philippines

Pope Francis has arrived in the Philippines, Asia's most populous Catholic nation. The high-point of his week-long trip is expected to be an open-air mass on Sunday at a park in Manila. (15.01.2015)

The Catholic Church has played an important role in the process of reconciliation between Sri Lanka's Sinhalese and Tamil communities. Pope Francis' upcoming visit to the South Asian country could help consolidate it. (12.01.2015)

For many Filipinos prayers are as important as food. Around one third of the country's population lives below the poverty line, and it is the Church which gives the impoverished people hope and comfort. You find religious symbols everywhere in the country - pictures of the Virgin Mary on buses, and ads reading "Jesus Saves" and "God is life," flashing on gigantic neon signs by the side of the road.

Despite the country's secular constitution, the Church plays a very influential role both in politics as well as in the people's everyday lives.

Some people are critical of the nexus between religion and politics in the Philippines. "If our politicians defy the commandments of the Church and its dogma, they are denounced by the clergy, and an altar is prepared for their crucifixion," activist Carlos Celdran told DW.

Celdran also criticizes the ultra-conservative attitude of the Filipino church in relation to family planning: "For the past 16 years, the Church has tried to prevent the adoption of a birth control law - a law that can make available contraception to the poorest of the poor and improve sexual education in schools. The damage the Church has done to the country can be felt everywhere."

In 2012, President Benigno Aquino came out in favor of the historic and widely popular birth control law. But the country's bishops went immediately on the offensive. With its population of 100 million, the rapid population growth poses a serious challenge to country's environment, infrastructure and food supply. Every year millions of children are born into abject poverty in the Philippines. Moreover, the number of people with HIV/Aids is increasing, contrary to global trends.

Despite all this, the Church views contraception as the work of the devil and has fought both the birth control law and family planning programs through nationwide campaigns. As a result, the country's budget committee refuses to provide the necessary funds to implement the law. Women seeking to terminate the pregnancy - regardless of the reason - must now take the sometimes life-threatening risk of having an abortion in an unlicensed clinic. Abortions are not only illegal in the Philippines, but also condemned by the Catholic Church. 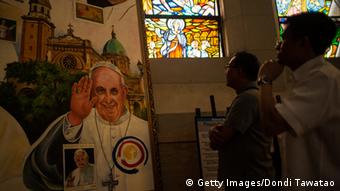 The role of clergy in Manila has often been criticized

A call to rethink?

Carlos Celdran and other critics hope that with his progressive views, Pope Francis will encourage conservative priests in Manila to rethink their stance on both this and other issues such as homosexuality and divorce. Church officials in the Philippines still oppose the divorce law, even though Pope Francis recently set a more moderate tone on this issue. "I would like for the Catholic Church to know its place in this country – which is neither in city hall, nor in my home, but in the church."

The spirit of the Catholic Church is ubiquitous at Dolores's home. She doesn't believe in family planning: "No Christian should use a contraceptive. That is a sin and against God's will," said the mother of five. Her children seem to share her view.

The family's only bread-winner at the moment is her eldest son. Her fertility is a gift from God and, along with her faith, her only means of existence.