Catholics build bridges between Sri Lanka′s ethnic groups | Asia| An in-depth look at news from across the continent | DW | 13.01.2015

Pope Francis has arrived in Sri Lanka bearing a message of peace. DW talks to Jehan Perera of the National Peace Council on how the Pope might help reconcile the island's ethnic groups after a decades-long civil war. 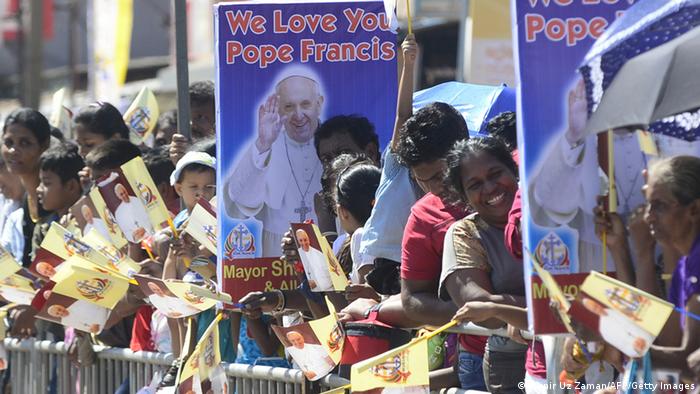 Less than a week after Sri Lankans elected Maithripala Sirisena as their new president, Pope Francis arrived in the mostly Buddhist island nation on Tuesday, January 13, marking the beginning of a week-long two-nation Asia tour which will also take the head of the Catholic Church to the Philippines. Catholics make up six percent of Sri Lanka's 21-million population.

Bearing a message of peace and justice, the Pope said upon his arrival at Colombo airport: "The process of healing also needs to include the pursuit of truth, not for the sake of opening old wounds, but rather as a necessary means of promoting justice, healing and unity."

The issue of reconciliation and violence amongst the South Asian nation's different ethnic and religious groups has been contentious, especially as the previous government refused to cooperate with a UN-mandated investigation into alleged wartime mass killing of civilians.

For some 30 years, Sri Lankan armed forces fought against militant separatists seeking to create an independent state for the Tamil-speaking minority in the north and the east of the island nation. Only in May 2009 did the central government in Colombo, led by the ethnic Sinhalese majority, manage to recapture the last area controlled by the Liberation Tigers of Tamil Eelam (LTTE), putting an end to a civil war that had claimed the lives of more than 100,000 people, according to United Nations estimates. 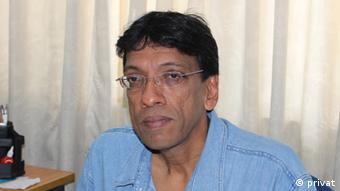 Perera: 'Pope Francis's role will be the acknowledgement of the pain on both sides'

In a DW interview Jehan Perera, Executive Director of Colombo-based National Peace Council (NPC), says that given that the Catholic Church in Sri Lanka is composed of nearly equal numbers of Sinhalese and Tamils, they can play the role of bridge builders as they share a common religion and have a better opportunity to engage with one another.

DW: What role can Pope Francis play in the easing the ethnic tensions in Sri Lanka and healing the wounds of the civil war?

Jehan Perera: Although the war has been over now for nearly six years, the wounds still linger. There is no political solution that would address the roots of the conflict. The Sri Lankan military remain in former war zones, the Tamil areas of the North and East, and interfere in the lives of the civilian population. They have also taken over land of the people for their military camps.

The government has also not investigated what happened to tens of thousands of civilians who went missing or died during the war. Therefore, the Tamil people continue to suffer without being able to put the past behind them. The challenge for Sri Lanka is to go forward, to overcome the past, to know the truth, to obtain justice, to forgive and to reconcile. 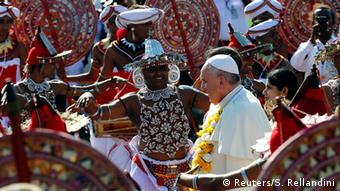 Perera: 'The Pope is not a political leader and does not get involved in internal affairs of countries'

The Pope is a religious leader, so he is not divisive like a political leader who is interested in getting people's votes. He is reconciliatory. It is clear he is reaching out to both the South and North. The issue of national reconciliation will be uppermost in the people's, the government's and the Pope's hopes regarding Sri Lanka.

How can the country's Catholic minority help with the reconciliation efforts?

When the Sri Lankan bishops met with the Pope at the Vatican last year, Francis was reported to have urged them to continue their role in working towards reconciliation between the government and the Tamils living in former conflict areas. The Catholic Church in Sri Lanka is composed of nearly equal numbers of Sinhalese and Tamils.

They can play the role of bridge builders as they share a common religion and so have a better opportunity to engage with one another. The Pope's visit to Sri Lanka would also offer the new Sri Lankan government an opportunity to demonstrate to the ethnic and religious minorities, and to the international community, that it accepts the reality of Sri Lanka being a multi-ethnic and multi-religious country.

Although the war is over, the polarization within the country has been growing and we are in danger of failing to resolve the root causes of our war and recreating heightened conflict once again. The Pope's visit to Sri Lanka offers the possibility of collectively remembering the past and its costs and praying together as citizens of one country to find the way to a just and mutually acceptable political solution that ensures that such a collective tragedy will never occur again.

The Catholic Church has played an important role in the process of reconciliation between Sri Lanka's Sinhalese and Tamil communities. Pope Francis' upcoming visit to the South Asian country could help consolidate it. (12.01.2015)

Sri Lanka will go to the polls on January 8 to elect a new president in what is set to be a closely fought election. Incumbent Mahinda Rajapaksa seeks a record third term amid growing criticism and incidents of violence. (07.01.2015)

How has the Catholic Church in the country dealt with religious tensions and the aftermath of the civil war?

The Catholics are an influential part of Sri Lankan society and are in key positions. They have headed the army, the judiciary and are also represented in the government and opposition political parties at high levels. The former president's wife is a Catholic. Catholics have stood on different sides of the conflict, and some have even led the war effort on either side.

But the Catholic Church as an institution has always worked for a political solution to the ethnic conflict that addresses the roots of the conflict, and has also opposed war and violence as a solution. The Church has played an important role in peace-building. During the war, the Catholic bishops acted as facilitators carrying messages between the Sri Lankan government leaders and leader of the LTTE.

After celebrating Mass in Colombo on Wednesday, Pope Francis is scheduled to fly to the country's former war zone in the north and visit the Shrine of Our Lady of Madhu, a site that draws both Tamil and Sinhalese Catholics. How significant will this visit be?

Pope Francis's role will be the acknowledgement of the pain on both sides. So far the only public commemorations have been held by the Sri Lankan government when it remembers the war victory and the sacrifice of the soldiers. The public commemorations of the Tamils, however, have been prohibited by the government on the grounds that this will rekindle memories of the LTTE who fought to divide the country.

The Pope will be having religious services both in the capital city of Colombo in the south of the country, which is where the Sinhalese ethnic majority predominate, and also in the village of Madhu in the north of the country where the ethnic Tamil minority lives.

Madhu is not only a sacred area for Catholics where hundreds of thousands of Catholics, both Tamil and Sinhalese, go to pay homage. Madhu was also a part of the last phase of the war, and one of the last battleground areas. The shrine is also located in the area where the worst battles of the 30-year-long war were fought, and where there was a very large welfare center for internally displaced persons. 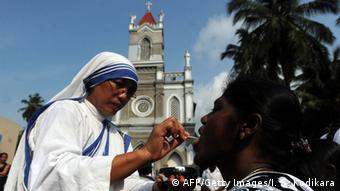 Catholics can play the role of bridge builders as they share a common religion and so have a better opportunity to engage with one another, says Perera

When he conducts the religious services, the Pope will be remembering all of those who lost their lives and all who were victims of the war. He is taking a first step to the hearts of the Tamil people who have been feeling isolated. For the Sri Lankan government the war has only been remembered in terms of its victory. But after the Pope's visit, it will have to take the second and third steps.

In your view, how is Sri Lanka's new president Sirisena likely to deal with the issue of religious tensions, especially between Muslims and Buddhists?

The religious clashes between the Buddhists and Muslims were orchestrated. They did not happen because the Buddhists in general were hostile to the Muslims. There was a small group of Buddhist extremists who attacked the Muslims in a few locations. The problem was that the government did not prevent those attacks and also did not arrest those who committed crimes against the Muslims.

As a result there was a suspicion, and reasonable grounds to believe, that there was connivance on the part of a section of the government in the attacks on the Muslims. If the government permits the police to maintain law and order, there will be no attacks. The new president has pledged to ensure good governance. He has stated that he will restore the independence of the police and judiciary.

Will the Pope urge Sirisena to launch an independent investigation into the alleged war crimes committed during the civil war?

The issue of war crimes is very controversial in Sri Lanka. The former government took the position that the international community was trying to punish it for defeating the LTTE who committed many terrorist atrocities and war crimes themselves. This argument has been accepted by most Sinhalese people. They see the international inquiry as biased against Sri Lanka and an interference with Sri Lanka's sovereignty.

The focus only on the last phase of the war where the government defeated the LTTE instead of its entire duration of nearly 30 years is seen by many in Sri Lanka as a partisan intervention to punish the government for defeating the LTTE. 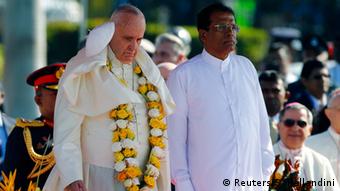 As a spiritual leader the Pope might advise the president to engage with all sides in order to find truth, justice, forgiveness and reconciliation, says Perera

Any investigation of the past, either in the form of an international inquiry or a national Truth and Reconciliation Commission, would need to win the acceptance of the different ethnic communities who constitute the Sri Lankan people.

A national investigation that meets international standards might be the best way forward. Whether the Pope can help in regard to setting up an investigation into war crimes in Sri Lanka is uncertain. The Pope is not a political leader and does not get involved in internal affairs of countries.

As a spiritual leader the Pope might advise the president to engage with all sides in order to find truth, justice, forgiveness and reconciliation. As the president has won the election on a reconciliatory platform, he should be in agreement with the Pope.