Professional triathlete Laura Philipp has refocused her training regime to take her menstrual cycle into account. She spoke to DW as she helps female athletes utilize training methods to achieve optimum performance.

Professional triathlete Laura Philipp is helping to turn top performance training for more women on its head with menstrual cycle-based training. The concept has worked well for her, one of the top-ranked triathletes in the world.

Philipp has refocused her training regime to take her menstrual cycle into account. She spoke with DW as she works to help female athletes around the world do likewise.

She was already among triathlon's elite when she placed fourth in her debut performance at Hawaii's Ironman Triathlon World Championships in 2019. That's the annual premiere race that starts with a 3.8-kilometer swim, transitions to a 180-kilometer bike ride, and finishes with a marathon run of 42.2 kilometers. The training for such an event, Laura Philipp has recognized — along with untold numbers of female endurance athletes dating back generations — plays havoc on a woman's menstrual cycle.

Extreme training combined with low-percentage body fat leads to irregular periods, or sometimes no period at all. The frequent solution, espoused by many doctors and athletes alike, is the Pill. The contraceptive is widely-considered the best way to manipulate a woman's cycle. 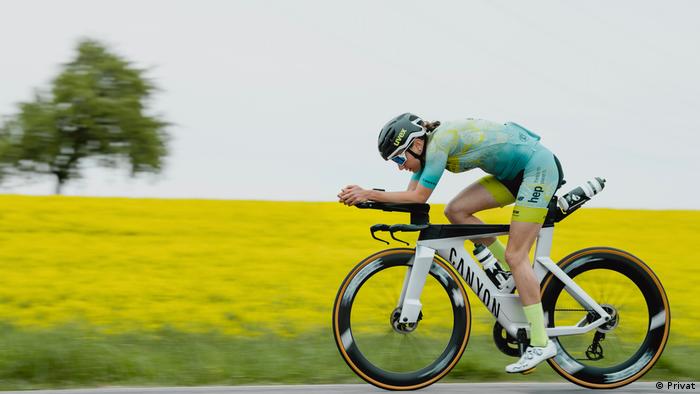 "At the gynecologist, I only ever heard the recommendation, 'Take the Pill,' Philipp told DW. "I took the contraceptive pill for years," she said, adding pointedly, "not to do better in my sport." When she stopped using the Pill, and started analyzing her performance based on her menstrual cycle, "connections suddenly became visible. For example, how the cycle reacts to heavy loads (of exercise)."

"Women athletes, especially in endurance sports, have difficulties having a cycle anyway. I felt like I came across something that could take me to a new level."

Her coach, a man and her husband, admits to designing Philipp's training without taking her gender into account. "I was ignorant," Philipp Seipp told DW. "I was convinced I knew exactly how sports works. With Laura's impetus, we realized that things don't work that way."

The pair focused on reaching a new level of endurance and performance based on the idea of being "one with yourself and your body."

"One has to consider that the physiology of women requires individual training control," said Seipp, "and that training science has to make extreme adjustments." Examples the two cite include interval training mostly only in the first half of the cycle, and never pushing the body too hard on an empty stomach, especially in the second half of the cycle.

"If you know your body and adjust your diet and training accordingly, you can almost always deliver top performance," Philipp explains. "It may be a little more psychologically stressful. So I have to work harder for it, but I can gain the confidence in my body that I can do it. 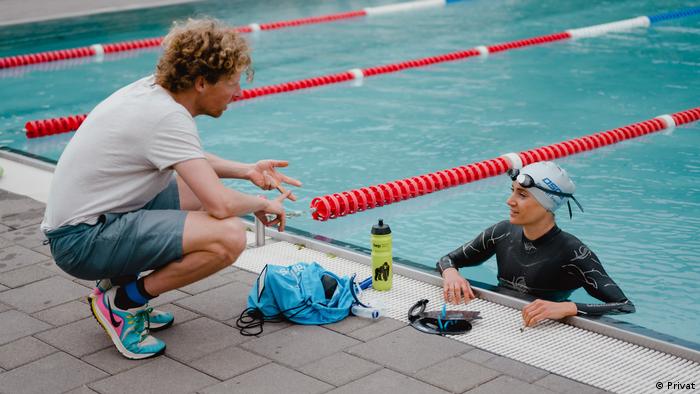 Philipp's husband and coach, Philipp Seipp, has helped her adjust her training regime

Philipp wants other women to gain that confidence as well. She has dedicated her YouTube channel to cycle-based training, offering information and links to information that is useful not only for athletes. She wishes she'd been told this stuff while she was growing up.

Philipp's video posts have another purpose: Getting athletes and coaches — women and men, women and women — to discuss how the menstrual cycle should be considered when planning and completing endurance training. I think it's amazing how many women there are who don't trust each other to talk about it," said Philipp.

"It is a total taboo for many athletes to talk to their coach about it. We women have to learn to be more open about it," she added. "I've had so many messages from women who said they absorbed this, tried all the tips, got their periods, had fewer complaints and dared to talk to their trainer about it."

"Existing theories and training patterns can then be checked and adapted," Seipp concludes. "It will take years for changes in teaching, training and practice to take hold, but in many women and men I see a new awareness, and a sensitivity around this topic."

This article was originally published on May 24, 2021.

A new study investigates whether women's voices change during their menstrual cycle. The provocative, sexy science impacts whom and how we love and marry, something interesting to biologists and lovers alike.

Triathlete Patrick Lange: 'I only knew when I crossed the finish line'

Patrick Lange's victory at the Ironman World Championship in Hawaii was one of the most impressive performances of the year. He spoke to DW about how he got there and the spirit that exists in the sport.

COVID: Heavier periods after vaccines little cause for concern 15.07.2022

A new study has found that many people had heavier or unexpected menstrual bleeding after their COVID-19 vaccinations. Changes were minimal and temporary, but here's why you should keep an eye on them.

Laura Philipp is a triathlete with a tough training regime. She’s also a pioneer! Philipp found that by planning her training sessions around her period, she was more efficient and had more strength.

Eating disorders in sports: When being lightweight becomes a serious problem 25.12.2021

Norway's ski jumping star Maren Lundby has fueled the discussion about deliberate starvation in competitive sports. Experts warn of the danger of slipping into a dangerous eating disorder.