The Mahdi Army: Turbans, Kalashnikovs and plans to ′slaughter′ | World | Breaking news and perspectives from around the globe | DW | 22.06.2014

A notorious Shiite militia is preparing to march on its rapidly-advancing ISIS enemy. In the past, the Mahdi Army was known for death squads, arbitrary shootings, kidnappings and bombings. 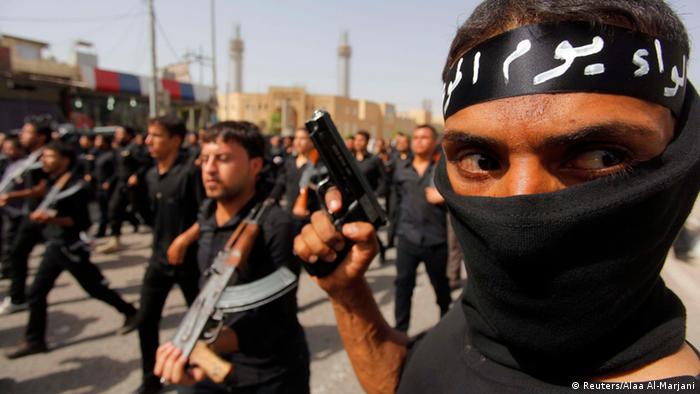 Baghdad hasn't seen anything like it for some time now: Shiite fighters marching in formation.

Bedecked in black training suits or flowing robes and turbans, they resemble Iraq's own army as they marched by the thousands through Sadr City over the weekend (22.06.2014). Sadr City's two million largely Shiite citizens make it Baghdad's largest district. They were ready to stand up to the terrorists, they cried. Everywhere, they could be heard: "We will slaughter them!"

Armed with rifles, pistols, grenades and Molotov cocktails, their first target is Samarra, where they plan to confront the largely Sunni militia Islamist State in Iraq and Syria (ISIS) and to protect their holy, Shiite mosque. The latter is proving a key point of contention.

Shia Islam's highest authority, Grand Ayatollah Ali Al-Sistani, again called upon the militants to join the fight against an enemy which threatens not only holy sites, but the unity of Iraq. Shiites now stand at the ready. 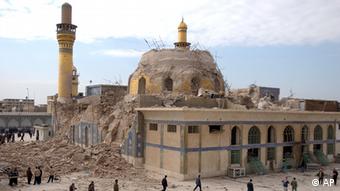 Catalyst for a 2006 civil war: The destroyed cupola of the al-Askari Mosque

The city they will march on has already experienced a nightmare. Samarra's spiraling minaret is known the world over, its al-Askari Mosque, a Shia treasure. Just 110 kilometers (68 miles) north of Baghdad, the majority of its 160,000 citizens are Sunnis. For Shiites, however, it's an incomparable spiritual center. A 2006 bomb attack on the golden cupola of the al-Askari Mosque led to inter-denominational war: Thousands of Sunnis and Shiites lost their lives.

Fears are high that similar events might now transpire. ISIS has been using the main road that leads from Mosul to Baghdad for its forward march. Lying along that road is Saddam Hussein's home town of Tikrit, the Beiji refinery and Samarra.

After Mosul and Tikrit fell two weeks ago, the fighting turned to the Beiji refinery, which supplies the entire city of Baghdad with electricity and fuel.

The tactical situation is unclear: Both sides proclaim victory again and again, all while the refinery remains shut down.

Throughout the country, ISIS fighters are also said to have taken control of Baquba, the capital of the Diyala province northeast of Baghdad, as well as the Syrian border crossings of Al-Qaim and Al-Walid and the Jordanian crossing of Turaibil.

Some claim, however, that the Al-Qaim crossing was overrun not by ISIS but by members of a local tribe. Yet the Anbar province containing Al-Qaim had by January largely fallen to the ISIS, with Al-Qaim refugees fleeing to camps on the outskirts of Baghdad.

The situation is equally as murky in the Diyala province, where violent ethnic clashes occurred in from 2006 to 2008. Diyala is sometimes referred to as "Little Iraq," since each of the country's ethnic groups is represented there and competes with the others for power and influence. 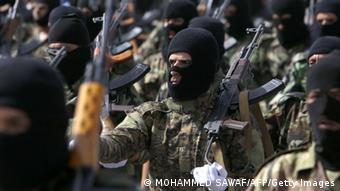 Yet the Shiite parades in Sadr over the weekend mark the rebirth of an era - one many had long considered overcome. Shiite leader Muqtada al-Sadr's Mahdi Army, a militia founded in 2013 to fight US occupation forces, has been given new life. According to its own figures, the Mahdi Army boasts half a million members.

The Jaish al-Mahdi, as the group is known in Arabic, was notorious, feared in Baghdad as instrumental in the escalation of bloody clashes between Sunnis and Shiites that ultimately led to civil war. Death squads often carried out arbitrary shootings; hostages were held in Sadr City until the group's conditions were met. Ransoms were not the goal, but rather the release of prisoners or withdrawal of US troops. Analogous to the Sunni terrorist organization, al Qaeda, Jaish al-Mahdi committed thousands of bombings, detonated roadside explosives and fired mortar shells toward the Green Zone, where the US and the Iraqi government had their administrations.

What distinguished the group from al Qaeda is the Shiite rejection of suicide bombings - something of a trademark for Sunni al Qaeda. 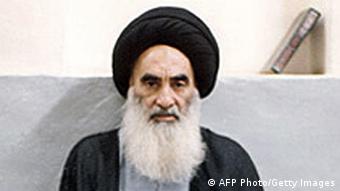 After three years of bloody civil war, Muqtada al-Sadr disbanded his army in 2008 and called upon them to lay down their arms. That happened due to the intervention in Najaf of Grand Ayatollah al-Sistani, who offered prospects to the young Shiite rebels - Moqtada al-Sadr was not yet 40 years old - for participation in the Iraqi political process; ultimately, they stopped fighting.

In the last cabinet, six "Sadrist" ministers, as they came to be known, were represented. In parliament, 40 Sadrist deputies held seats. Their votes helped deliver a second term to Iraqi Prime Minister Nouri al-Maliki.

Yet both Grand Ayatollah al-Sistani and Muqtada al-Sadr have now fallen out with Maliki, the latter calling him the "new dictator" of Iraq.

Does the revival of the Mahdi Army, then, represent Maliki's salvation? Or does Muqtada al-Sadr have something else in mind?

Regardless, if the Shiite militia intends to fight the ISIS, it does not bode well for many of Baghdad's citizens: Shiites and Sunnis alike are fearful of a looming confrontation that could escalate beyond control.