The Internet is the backbone of globalization

At the opening of the Global Media Forum in Bonn, Germany, Director General of Deutsche Welle Peter Limbourg calls the Internet "today's ultimate platform for information and participation." 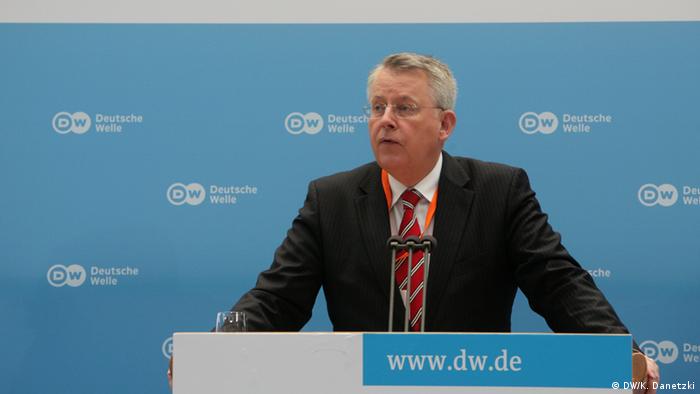 People from more than 100 countries representing the fields of media, politics, business, culture, global development and academia have gathered for three days to discuss and analyze the theme of this year's Deutsche Welle Global Media Forum, "From Information to Participation - Challenges for the Media."

Limbourg opened the international media congress by saying that the Internet is, “a wonderful invention that has made ​​our lives more diverse, colorful and richer. Its popularity around the world has revolutionized communications and the ways in which we create and consume media. It forms the backbone of globalization."

"More active participation, community involvement and interest in political decision-making processes - these are all worldwide trends,"says the head of Germany's international broadcaster. This was apparent during the Arab revolutions, the Maidan demonstrations in Kyiv, the Gezi Park protests in Istanbul and in popular protests across Brazil. "In every case, the media, and social media networks in particular, have played an important role."

"Move people off the couch and into the streets"

According to Limbourg, information and interaction via digital media can, "provide the final impetus needed to transform a latent mood into public opposition and mobilize civil society. In other words, it can move people off the couch and into the streets."

The opportunities as well as the risks in the digital world provide a broad context for conversation at the Global Media Forum.

Surveillance and access to data by third parties are, according to Limbourg, "downsides of the growing overlap between the real and online world."At the same time many states are trying to suppress the unfettered flow of information, and people's freedom to form their own opinion, through censorship, intimidation and persecution. Limbourg remarks that, "censorship and propaganda are profoundly unacceptable signs of attempts to rob enlightened world citizens of their rights. To counteract this we rely on openness, tolerance, diversity and respect - the entire set of values based on democratic principles."

Regarding the discussion over the threat digital technology poses to privacy and freedom, Limbourg says that the theme of this year's forum, "has struck a nerve central to an international debate."

At today's launch of the conference, which lasts through Wednesday, Thorbjørn Jagland, Secretary General of the Council of Europe, noted that the problem with surveillance is not a question of which personalities states can or cannot spy on. "The key issue is whether surveillance measures are based on clear, democratically adopted rules and are subject to effective digital scrutiny and parliamentary control."

DW's national and international partners for the 2014 Global Media Forum include, among others, Amnesty International, Deutsche Telekom, the Grimme-Institut, NATO, the United Nations, the Vodafone Institute for Society and Communications and Voices of Africa. The conference is co-hosted by the Foundation for International Dialogue of the Sparkasse Savings Bank in Bonn. Support is also kindly provided by Germany's Federal Foreign Office, the Federal Ministry for Economic Cooperation and Development and the City of Bonn. Cooperation partner is The Right Livelihood College Campus Bonn.