The growing problem of agitation against refugees online

Countless reports about criminal refugees circulate on the internet. Most are simply made up, but they are not without purpose. A number of digital initiatives are attempting to counter the false reports. 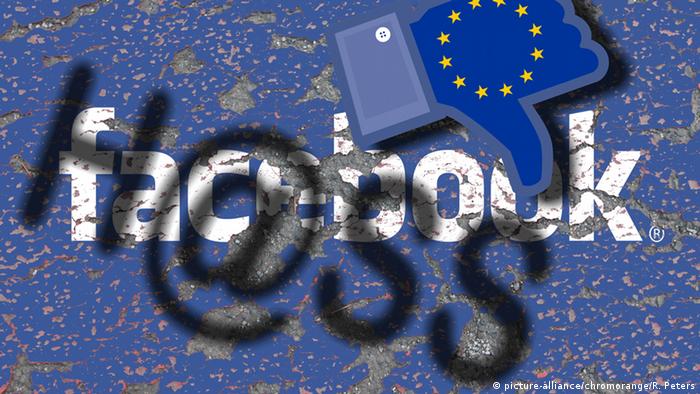 "A Dramatic Rise in Crimes Perpetrated by Foreigners": This report has been floating around on social media platforms for a while – especially since the fall of 2015, when large numbers of refugees arrived in Germany. Since that time, fake reports on criminal foreigners have become increasingly popular. And the slanders seem to gain credence and incite increasing anger as they are passed around social media sites.

The website hoaxmap.org illustrates the tales that are being spun about refugees. The site collects fake reports, analyzes their validity and, when needed, corrects them.

Click here for our special report on fake news

The 'individual case' as example

The "Einzelfall Map" (Individual Cases Map) uses Google Maps to chart instances its operators claim can be corroborated by eyewitness accounts or official police statistics. It went online following the sexual assaults in Cologne on New Year's Eve 2016. There is no way of knowing who is actually behind the site, as it is operated from abroad.

Mats Schönauer, a journalist and author at the website uebermedien.de, is critical of the "Einzelfall Map" approach, saying that it is not serious in the least. Schönauer and his team randomly selected 600 of the 10,000 cases of attacks supposedly committed by foreigners that are listed on the map, and then investigated them. 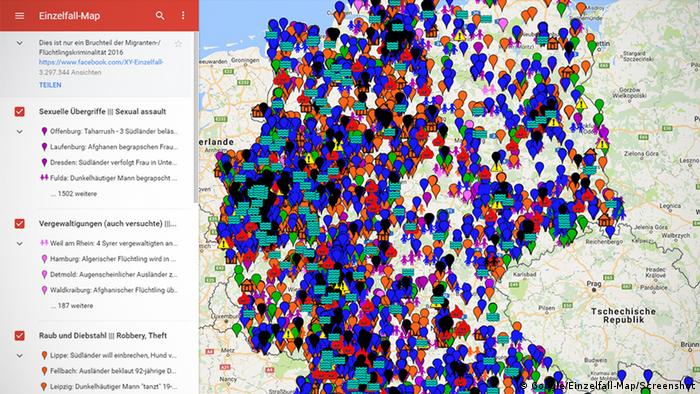 He says that it quickly became clear that the site's operators were working in an extremely arbitrary fashion. The site refers almost exclusively to crimes purported to have been committed by Arabs, Turks and Albanians. Georgians, Serbs and Romanians are also listed as possible perpetrators. The journalist criticizes the fact that criminals' foreign backgrounds could not be verified in 70 percent of the cases that he and his team investigated.

The map is based on police records, but these are often quite superficial in their description of perpetrators. One report, for instance, listed a suspect as being in his early 20s, about 1.90 meters (six foot, two inches) tall, with dark hair and "southern" appearance. Such descriptions are of questionable value as they could apply to ethnic Germans.

Nevertheless, "Einzelfall Map" has gained a lot of attention on social media networks – and also from Russian media active in Germany. The news portal "Sputnik," for instance, repeatedly references the site.

But agitation is not only taking place online. In early 2016, the case of Lisa, a 13-year-old girl from a Russian family living in Berlin, garnered much media attention. Media outlets reported that the girl had been kidnapped and raped by Arab refugees.

A number of Russian media outlets used the case to agitate against refugees. They claimed the case illustrated German authorities' inability to keep such crimes secret. As a result, German-Russians, supported by rightwing extremists and members of Alternative for Germany (AfD), protested in front of Germany's Federal Chancellory. 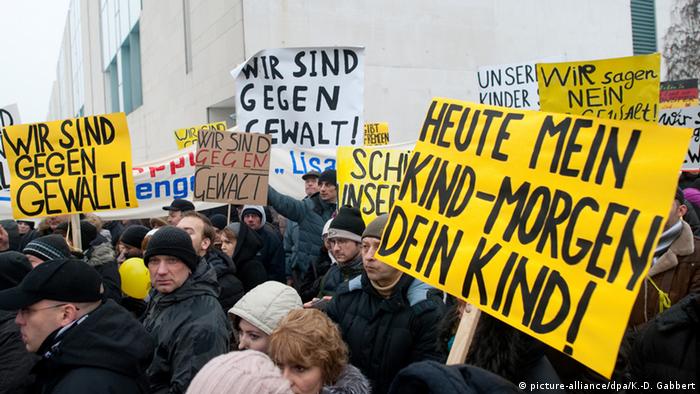 'Today my child, tomorrow your child' read the placards of protestors after the alleged abduction of Lisa

Shortly thereafter, Lisa reappeared – and eventually explained what had actually happened: She told of the problems that she was having at school and with her parents. Those problems were ultimately the reason she spent the night of her supposed abduction with a school friend. That friend turned out to be an adult.

Many demonstrators refused to believe official police reports on the incident. Russian Foreign Minister Sergey Lavrov even commented on the case from Moscow. Lavrov accused German authorities of downplaying the incident for political reasons.

A selfie with consequences

Syrian refugee Anas Modamani was also the victim of an online hate campaign. He first became popular when he posed for a selfie with German Chancellor Angela Merkel in the summer of 2015. Many agitators used the attention he was afforded to their own advantage. Among other things, he was falsely accused of having been part of the group of youths that attempted to set a homeless man on fire in a Berlin subway station in late December of 2016. Six of the suspects in the incident are Syrians, one is a Libyan national.

Shortly after the incident took place a manipulated photo appeared online. It supposedly showed Anas Modamani at the time of the attack. At that point Modamani hired a lawyer. He demanded that Facebook remove the photo. By then, it had already been shared hundreds of times. Facebook refused to remove the image. Their justification: The photo did not violate its community standards. Thus, Modamani continued to be accused of the crime and verbally attacked.

And, incredibly, he had to suffer further slander still. It was later claimed that Modamani was a member of the terror cell that conducted the attack at Brussels' airport in March 2016. The racist group Anonymous.Kollektiv posted the selfie of Modamani and the chancellor next to an image of Najm al-Ashrawi, one of the Brussels terrorists, on Facebook. It was claimed that al-Ashrawi had posted the photo himself. 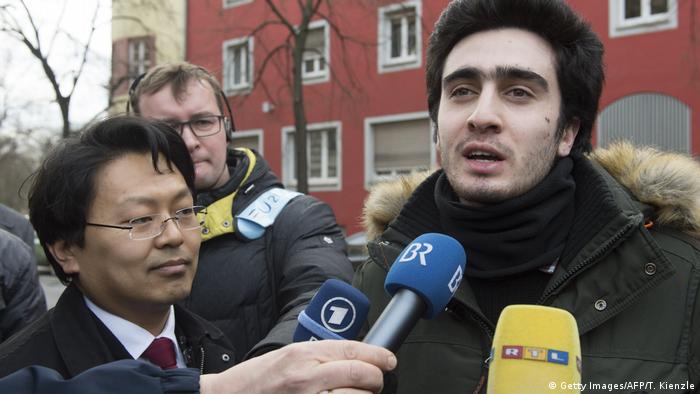 A well-established German media outlet was also unwittingly involved in disseminating a fake report. In February 2017, "Bild," Germany's largest tabloid newspaper, reported that a number of Arabic or North African-looking men had rampaged restaurants and bars in Frankfurt on New Year's Eve and went on to sexually harass women at the establishments.

The report was based on the testimony of a young woman who claimed to have been groped and harassed. It was also based on statements by a bar owner and two of his employees, all of whom claimed to have witnessed the incident.

But the case turned out to be a fabrication: Police said they could not confirm that the incident had ever taken place. "Bild" later apologized, and promised to investigate the source of this fake news item.

Yet online defamations continue. Whether they peddle fake statistics or manipulated "evidence": It seems that online agitators bent on slandering refugees and fomenting hate directed against them are willing to do whatever it takes to achieve those ends.