Female beauty is often defined by the Western fashion elite in Milan or New York. But more and more German magazines are speaking out against it. Internationally, there are a multitude of different agendas. 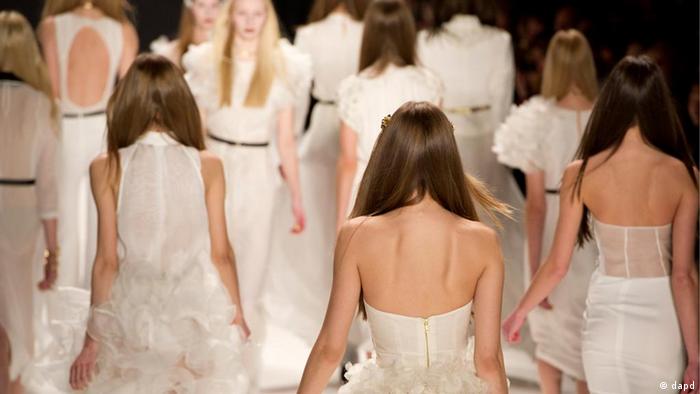 "I've really had enough of the tyranny of fashion. That's why I live in Berlin. Berlin is a lot freer," explained the Spanish-Colombian fashion designer Ricardo Ramos. In fashion capitals such as Paris and New York, it's a very different story. There, classic "standard" models are highly sought after: 1.80 meters (5.9 feet) tall, young, with hips no wider than 90 centimeters (35 inches) and preferably blonde. But Ramos selects his models according to the themes of his shows and collections. He once used an 80-year-model on the catwalk. He aims to be extravagant and never boring. 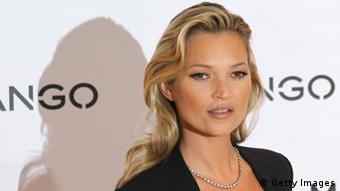 Today, the way models are supposed to look is increasingly standardized the world over. The Swedish clothing brand H&M uses internationally famous models such as Kate Moss. Many other brands use the same advertising campaigns – with the same models – around the world.

"Of course ideals of beauty are different in each country," said Christine Arp, Editor-in-Chief at German Vogue. But basically "the same standards and operating methods apply everywhere." In this light, Vogue's newly launched health initiative is aimed at the international fashion industry.

The health initiative encompasses six points. They may not be entirely concrete, but they could ruffle a few feathers in the fashion industry. 19 Vogue editors from around the world have signed the six point health initiative policy.

"We encourage designers to consider the consequences of unrealistically small sample sizes of their clothing, which limits the range of women who can be photographed in their clothes, and encourages the use of extremely thin models," is the wording of point five.

Andreas Matthias finds the initiative "very reasonable." The former model has run the VIVA modelling agency in Berlin for over 20 years. The agency has little choice other than to employ models who fit the international industry standards.

"Sadly, trends are made in Paris, Milan and London. We provide models in the hope that we have someone who fits the description brands are looking for." According to Matthias, the accusation that models are forced to continually become thinner is hysteria. Anorexia is usually developed in childhood or puberty and has nothing to do with fashion, he said. 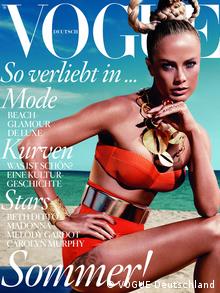 "What is beautiful?" asks the current issue of German Vogue.

The German women's magazine Brigitte was frustrated with having to artificially "fatten-up" models using Photoshop. "We often had to boost their breasts or hips," explained Editor-in-Chief Andreas Lebert.

Teachers, students or saleswomen have adorned the pages of the magazine since January 2010. "We wanted more naturalness instead of lifeless bodies and faces," said Lebert in justification of the magazine's new motto.

The initiative at Brigitte to use more "normal" women as models is unique in the industry. Ricardo Ramos believes that this stance is only possible in Germany. Even in the advertising industry, women with which the "average" German woman can identify with are preferred in place of supermodels.

In Latin America, models are often put on an unattainable pedestal. Models in shampoo commercials and the like are preferably blond and have fair skin. "The average Latin American woman tends to be darker-haired and dark-skinned," said Ricardo Ramos. 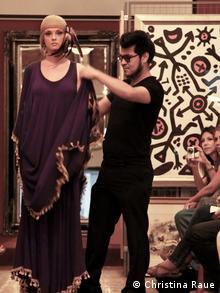 Ricardo Ramos prefers to use models who differ from the standard set by the fashion elite.

The fashion designer who has lived in Berlin for two years now, travels far and wide. In Africa and Latin America, curves are preferred more than in other parts of the world, he explained. "In Africa, women are required to show their femininity. Because women there are seen in connection with their role as mothers. Their bodies should show strength, that they can bring children into the world."

In Latin America, the craze for curves has had fatal consequences for a while now: "Increasing numbers of 15-year-olds are trying to find ways to surgically enhance their breast, which can cost them their lives."

In Asia, models with flawless skin are highly sought-after. Freckles and sun spots which are considered sexy in Europe and America, are not valued in Asia. Ramos also lived in India for a couple for months: "The Indian advertising and fashion industries like to use their own models: Indian women with flawless skin."

But even they are not always natural: "A large proportion of Indian models and actresses have lightened their skin tone." It's a trend which has also spread to Africa. Health issues usually occur due to the use of chemicals to lighten the skin.

Pale skin, endless legs or the perfect proportions – the different ideals of beauty all have one thing in common: The average woman in every culture around the world looks nothing like them.

After nearly going under last year, German fashion designer Wolfgang Joop is relaunching his couture label, Wunderkind. But can the veteran avant-garde designer make a comeback for Prussian fashion? (09.05.2012)

New York may be known as the city that never sleeps, and it does have plenty of reasons to stay awake. But in Berlin, a true city of night owls, people dedicate the late hours to crazy ideas. Followed by crazy deeds. (27.04.2012)

The phoenix of fashion rises in Berlin

Berlin hipsters are unofficially credited with inspiring fashion trends across the country - naturally, in an understated way. But Berlin Fashion Week is the official friend of fashionistas and it's in rude health. (18.01.2012)