As the planet heats up, scientists warn the dramatic seams of ice that have inspired ancient legends, Victorian explorers and modern tourists alike could all but vanish. 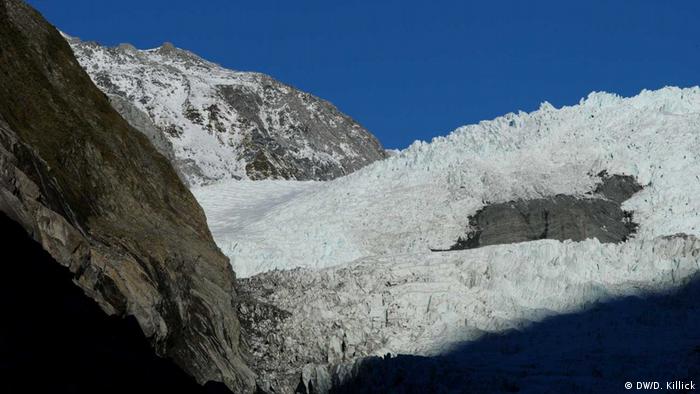 Once, there was a goddess called Hine Hukatere who loved to climb the high peaks of New Zealand's Southern Alps. But one day she decided to visit the beach, where she fell in love with the warror Wawe.

Hine Hukatere invited Wawe to her mountain home. But Wawe couldn’t keep up with the fleet-footed goddess. He stumbled and fell, and an avalanche swept Wawe to his death.

Grief-stricken, Hine Hukatere cried and cried. Rangi, the Sky Father, took pity on her and froze her tears, turning them into a river of ice.

It was only in 1865 that German explorer Julius von Haast named the glacier Franz Josef in honor of the Emperor of Austria and Hungary.

Von Haast was at the vanguard of a flood of travelers who have flocked from afar ever since, to see the dramatic frozen seam and its sister the Fox Glacier, that plunge from the Southern Alps of New Zealand’s South Island, through the lush rainforest below. 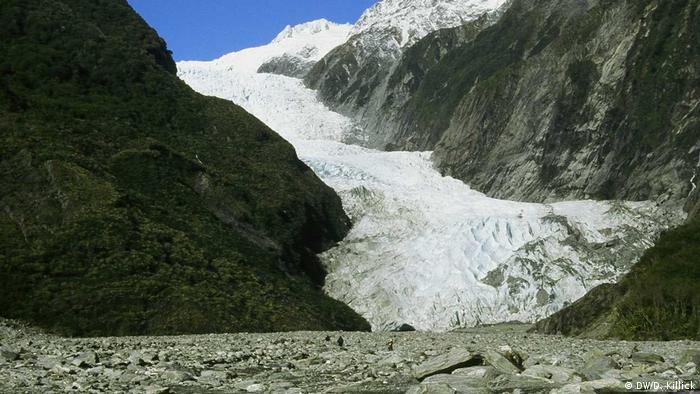 The Franz Josef Glacier in 1997. It had retreated about three kilometers by 1983 when it began to advance again

Science has another story. Glaciers are not, in fact, formed from frozen water but by compacted snow. The accumulation of snow at the head of the glacier is called a névé. After four to five years, it compacts and becomes part of the glacier.

Striations, patterns on the rocks, mark the glacier's long path through the valley. Thousands of years ago, it would have reached as far as the sea. The first photograph of Franz Josef Glacier was taken in 1867, and shows the glacier dominating the valley.

The first official mapping of the glacier took place in 1893 between then and 1983 it retreated about three kilometers, but advanced again 1.5 kilometers by 2008. 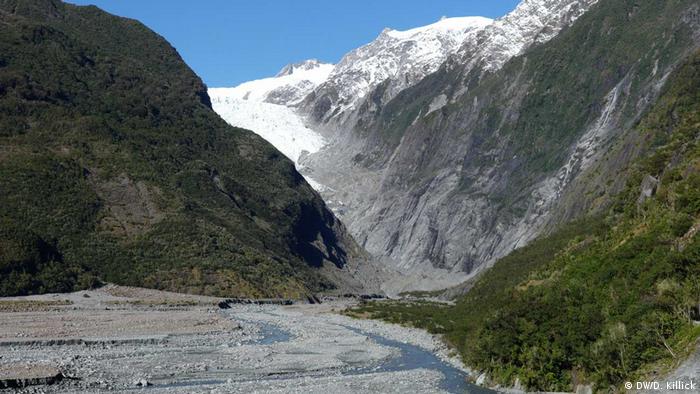 That advance has now been lost almost completely, as the glacier retreated 1.4 kilometers over the last decade. That has scientists worried. "That's a big retreat and it's happened really fast," Brian Anderson, a glaciologist at Victoria University in Wellington, told DW.

Back in 1977, glaciologist Trevor Chin started the End of Summer Snowline Survey, taking aerial photos to measure the amount of snow left at the top of the glaciers. The latest survey, conducted in March 2018 — at the end of the hottest southern summer on record in New Zealand — revealed that most of the glaciers measured didn't have any snow left on them at all.

Anderson has no doubt the reason for the glaciers' retreat is anthropogenic — or man-made — climate change. "New Zealand's glaciers are quite special and responsive to climate change, and sensitive, so they can respond really quickly and move quite a long way," he told DW.

The Franz Josef Glacier's three-kilometer retreat during the 20th century occurred as the Earth warmed by about 1 degree Celsius. 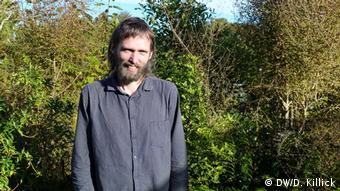 And sea temperature also plays a significant role in glacier movement. "There's a really strong link with sea temperature, especially off the West Coast. [We've had] a record hot summer, and it's the hottest that parts of the Tasman Sea have been as well, and the glaciers have shown their greatest mass loss," Anderson says.

With scientists now predicting the planet may warm by 2 to 4 degrees Celsius over the next century, the future of the glaciers — and those who rely on them — is increasingly uncertain.

Anderson says if we don’t cut our greenhouse gas emissions, we will one day good-bye to these ancient glaciers. Because the mountains are over 3,000 meters high, the glaciers in this part of New Zealand are unlikely to disappear altogether. But they will become very hard to see.

The villages of Franz Josef and Fox Glacier depend heavily on tourism. But few here are keen to talk about the impact of climate change. One tour company even abruptly canceled a scheduled interview. 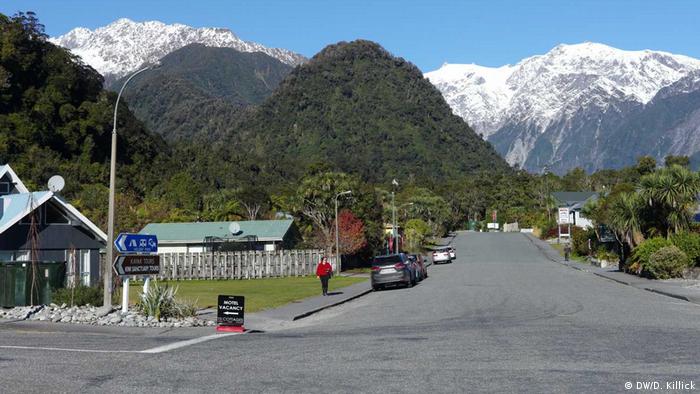 Guides used to be able to lead tourists straight on to the glacier by foot. Now, flying in on a helicopter is the only way for tourists to climb on the glacial ice.

Tourists— including some from China, Malaysia, the United Kingdom, the United States, and New Zealand — said they enjoyed their visit to the glacier, but found it sad that it was being diminished by climate change.

"They're all going to be gone very soon because we're not taking good care of our Earth," Kathie, a retiree from Arizona told DW. "So, got to see them while you can. They're marvelous."

Local guide Cliff Goodwin told DW that there was still plenty for tourists to explore in glacier valley, which offers a chance to learn about the science and the history of glaciers, as well as ecology and conservation. He says so far, there has been no fall in visitor numbers and he expects the scenic attractions of the West Coast to keep pulling them in.

But with warmer-than-average temperatures likely to continue for the rest of the year, scientists like Anderson will have watchful eye on the glaciers, as they work to prove the link between their rapid retreat and climate change before it's too late.

President Obama trekked up Exit Glacier in Alaska to make a dramatic statement about world climate. He has called the melting glacier "a signpost" of what the US faces as global warming threatens natural resources. (02.09.2015)

The Pine Island Glacier in the Antarctic hit the headlines last year when a giant iceberg broke off it. Now scientists have found the glacier is melting irreversibly - with dramatic consequences for global sea levels. (16.01.2014)

The Paris Agreement sought to place a lower limit on global warming at 1.5 degrees Celsius. But researchers fear that may already be locked in - even 2 degrees may be overshot. All the more reason for action, many say. (07.08.2017)

Flash floods and landslides are common in the Himalayan parts of northern India during the months of June to September. But scientists say global warming and melting glaciers have further exacerbated the situation.