The Pine Island Glacier in the Antarctic hit the headlines last year when a giant iceberg broke off it. Now scientists have found the glacier is melting irreversibly - with dramatic consequences for global sea levels. 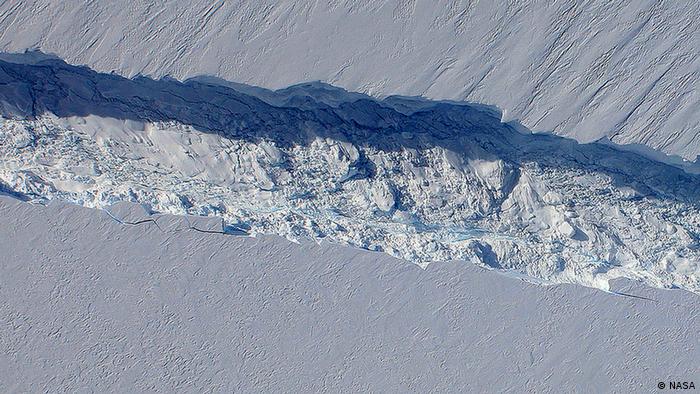 For the past 15 years scientists have been observing that glaciers in West Antarctica are out of balance. Ice shelves have been breaking off and the calving fronts of the glaciers have been retreating, draining huge amounts of ice into the ocean.

One of them is Pine Island glacier, which is responsible for some 20 percent of the total ice loss from the region. Gael Durand of the French University of Grenoble is one of a team of scientists who have just published a new study using three different models: "We show that the Pine Island Glacier will continue to retreat and that this retreat is self-sustaining. That means it is no longer dictated by changes in the ocean or the atmosphere, but is an internal, dynamic process", Durand told DW.

This will mean an increasing discharge of ice and a greater contribution to global sea level rise. "It was estimated at around 20 gigatons per year during the last decade, and that will probably increase by a factor of three or five in the coming decade. That means this glacier alone should contribute to the sea level by 3.5 to 10 millimetres a year, accumulating to up to one centimetre sea rise over the next 20 years. For one glacier, that is colossal", the scientist said. 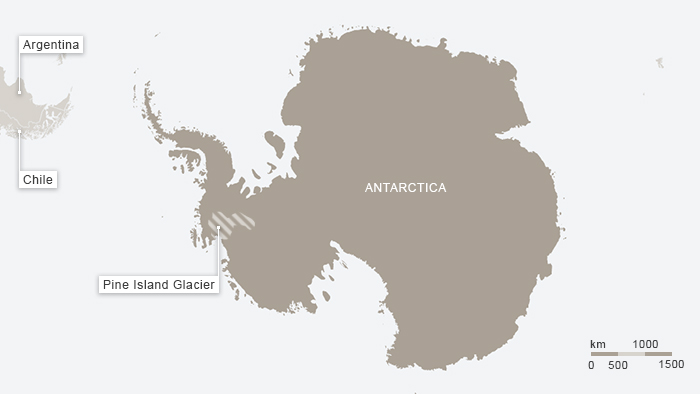 Angelika Humbert from Germany's Alfred Wegener Institute for Polar and Marine Research (AWI) told DW that would be an "extremely high" amount. The glaciologist, who is also working on models for the Pine Island Glacier, stresses that all models include a degree of abstraction and uncertainty. However, her work also indicates that the glacier will make an increasing contribution to sea level rise in the coming years.

Humbert describes the new study as a "considerable advance on the results of research to date." She and colleagues from AWI and the University of Kaiserslautern monitored the breaking of a giant iceberg from the glacier last year. It lost a huge chunk of the floating ice shelf at its seaward end. 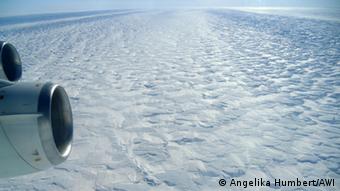 Humbert photographed the glacier on a flight last year

"Pine Island Glacier is one of those which have one part that is sitting on land and one part that floats, with the bedrock underneath tilted inwards towards the continent," Humbert explains. This can lead to what scientists call a "marine ice sheet instability." which can result in irreversible decline. This, it seems, is the case with the Pine Island Glacier. She and her colleagues want to find out which processes take place at the "grounding line" where the glacier enters the sea. They use models to describe the mechanics and flow patterns of the glacial ice.

Durand's new study shows that the glacier is now flowing at a rate that makes the process irreversible. This particular glacier is being markedly affected by melting because it is close to a current of warmer water, which melts the ice shelf from below and makes its way into cavities below the ice in places. This reduces its ability to act as a butress to the rest of the glacier, so that more and more ice flows towards the ocean.

Even if the air and ocean temperatures cooled off to what they were a hundred years ago, Durand is convinced the glacier would not recover. And there is no sign of any trend in that direction anyway, he stresses. Humbert is more cautious, saying irreversibility is hard to prove conclusively. But it is hard to imagine any factor which could reverse the trend, she admits.

Humbert estimates that science will need another five to ten years to develop the models, which need a huge amount of computing capacity, to an extent where they can make completely accurate forecasts. Another problem is the collection of basic data to feed into the models, especially relating to what is happening below the ice. Nevertheless, Humbert says the study provides valuable results that could well be applied to other glaciers of the same type in the area.

Beyond the tipping point

Durand says the study should arouse concern because of its significance with regard to the global climate. "These glaciers have already passed the tipping point, and that is irreversible. That means because of our behaviour, our climate is changing and will continue to change a lot. I think it is one of the first times we are passing these tipping points."

The scientist compares the situation to that of a cyclist coming down from the top of a mountain and unable to brake: "We have to fear that the retreat will continue, that other glaciers in the region will start to do the same, and that we will have a collapse of this part of the ice shelf. That would take centuries, but it would mean a rise of several metres in sea level."

The last report by the Intergovernmental Panel on climate Change (IPCC) warned of the implications if the glaciers of West Antarctica were to become unstable. "Here," says Durand, "we have proof that that is already happening with this one."

Glaciers may only exist in certain cold corners of the world, but just like tropical rainforests, peatlands, wetlands and oceans, they support life on Earth hundreds of thousands of kilometers away; regulating ocean temperature, freshwater supply and our climate. In this episode we hear why ice is so integral to the planet as a functioning ecosystem, and some radical ideas to stop it from melting.