The faltering Middle East peace process | World| Breaking news and perspectives from around the globe | DW | 29.12.2013

Under the aegis of US Secretary of State John Kerry, Palestinians and Israelis are trying once again to reach a peace accord. But they've made little progress so far, and a deadline is looming. 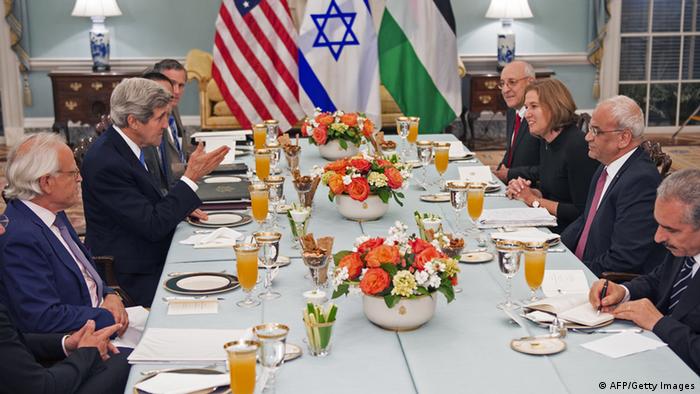 Israeli and Palestinian negotiators have just four more months in which to reach an agreement. The peace talks that began in July are scheduled to end in April 2014, and it is unclear whether there will be a new round of talks after that.

The American Secretary of State, John Kerry, who initiated this latest round of negotiations and is heavily involved in the talks, intends to travel to the region again in January 2014. It will be his tenth visit to the Middle East since last March. The US State Department has announced that Kerry will meet with Israeli Prime Minister Benyamin Netanyahu in Jerusalem and Palestinian President Mahmud Abbas in Ramallah. 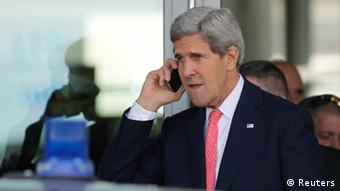 As things stand, there is little prospect of the two sides reaching an accord. Israel's latest plans to extend its existing West Bank settlements by building another 1,400 homes have sparked renewed anger. Furthermore, the Palestinian delegation strongly opposes the Israeli demand that, if an independent Palestinian state were to be established, Israel should still be allowed to station troops in the Jordan Valley, to repel potential attacks from beyond its eastern border.

It's a suggestion that is also found in the security package presented by US Secretary of State John Kerry. In recent years, Israeli-Palestinian negotiations had more or less ground to a halt. The Palestinians reject any Israeli troop presence on the banks of the River Jordan. They regard as this as a violation of the sovereignty of a future Palestinian state. The Arab League has also spoken out against the request, for the same reason.

The River Jordan plays a key role in the Middle East conflict. In the Arab-Israeli War of 1948, Jordan conquered a large swath of the West Bank and East Jerusalem, thereby extending its western border far beyond the river. Then, in the Six Day War of 1967, this area was recaptured by Israel. Since then the river has again marked the border between the countries of Israel and Jordan. It is this West Bank region, on the Israeli side of the river, that some envisage eventually becoming a Palestinian state. 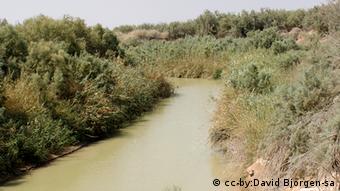 Israel and Jordan signed a peace treaty in 1994. But Israel fears, on the one hand, the infiltration of extremist terrorists from Jordan and, on the other, that extremists may also come to power in the West Bank. The country's leaders want to have a military presence there to protect against these potential threats.

The presence of the troops is just one among many points of controversy in these Israeli-Palestinian negotiations. In an interview with the London-based Arabic newspaper "Al Quds al Arabi," the chief Palestinian negotiator, Saeb Erekat, said that negotiations were in any case only taking place indirectly - as Palestinian-American and American-Israeli talks. Neither side felt able at the moment to negotiate directly with the other.

Erekat commented bluntly on the current situation. Agreement was not possible at the present time, he said, because Israel continued to pursue its settlement policies in the West Bank, impose its will upon Palestinians, overstep its authority, and kill Palestinians. Erekat warned that creating tough situations on the ground meant forfeiting the chance of reaching a peace agreement, but he went on to say that he did not rule out entirely the possibility of successful negotiations.

Meanwhile, Israeli politicians are also indicating that they would like to move the negotiations forward. According to a report in Israel's "Jerusalem Post" newspaper, the former director of the Israeli domestic intelligence service Shin Bet, Yaakov Peri, said that the current negotiations were taking place in an atmosphere of "cautious optimism." 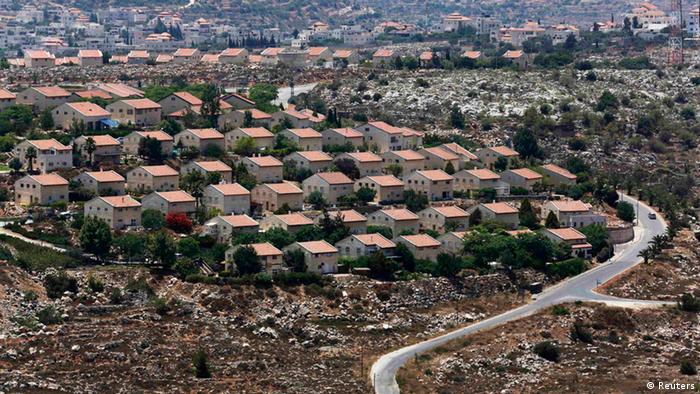 Israel recently announced plans to build another 1,400 homes in its West Bank settlements

But the Palestinian political scientist Bassem Zubaidi told DW in an interview that the majority of his countrymen were not especially optimistic right now. Because Israel was pushing ahead and extending the settlements, even during negotiations, "the likelihood of having a territory where a Palestinian state can be established is becoming very slim - there is no more land left," he said.

Zubaidi supports the peace process, but doubts that it will bring about any "concrete, meaningful" results. The process "currently lacks the dynamics to become a peace process," he said, meaning that Palestinians continued to suffer from poverty and unemployment and had almost no hope of improving their situation. "Therefore I will not be surprised if down the road, a year or two or three from now, things take a different turn and violence erupts," Zubaidi concluded.

The Israeli economist Shir Hever is more hopeful. He maintains that boycotts of Israeli products, for example, send a strong message. "You can see that this sort of message is already starting to be heard in Israeli society," he told DW. "People are starting to realize that they cannot continue acting like they are now forever." He believes that sooner or later the Israeli government will have to acknowledge this too: "Then they will have to either end occupation, allow Palestinians to have their own state, or they will have to give a right of citizenship and a right to vote to everyone."

Until then, though, the Palestinians will have to remain patient. Their chief negotiator, Saeb Erekat, specified a possible timeframe in his interview with "Al Quds al Arabi." He called it unlikely that the two sides would reach an agreement on contentious issues during the current negotiations. For that, he said, they would need to embark on another round - and that would take at least another twelve months to conclude.

At least three people have been killed along Israel’s border with the Gaza Strip. This was part of the worst flare-up of violence to hit the border area in more than a year. (24.12.2013)

Israelis and Palestinians are at odds over what a peace deal could look like, but they are united in one thing: the belief that an agreement is still a long way off and will not be signed next year. (25.11.2013)

Israel, Jordan and the Palestinians have signed a historic deal to make more water available while combating the shrinkage of the Dead Sea. The pact is part of a yearslong effort to address water issues in the region. (09.12.2013)