The disturbing trend of Taliban justice in Afghanistan | Asia | An in-depth look at news from across the continent | DW | 15.03.2017

The disturbing trend of Taliban justice in Afghanistan

A Taliban "court" recently ordered a young man accused of theft to have his hand and foot chopped off. The victim spoke with DW about his ordeal as an increasing number of Afghans turn to the Islamist group for justice. 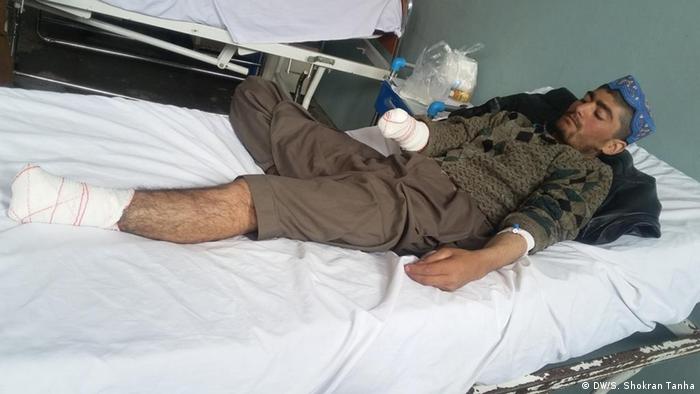 On Monday, the Taliban cut off an accused thief's hand and foot in the western Afghan province of Herat. It is the latest case of the militant group's harsh application of punishment for suspected criminals.

In another case earlier this month, the militants stoned a woman to death accused of adultery in northern Badakhshan province.

Afghan officials say security forces have ended an assault by armed men on a military hospital in Kabul. The attack, claimed by the so-called "Islamic State," left more than 30 dead, according to the Defense Ministry. (08.03.2017)

A confidential report by the German Foreign Ministry paints a grim picture of Afghanistan, a German public broadcaster says. Recently, German officials called for more Afghan refugees to be returned to their country. (25.11.2015)

The victim in Herat, 15-year-old Afghan Ghulam Farooq, was captured by Taliban members after he and three of his friends were allegedly involved in a motorcycle theft in Obe district. Farooq, however, insists he was innocent and wrongfully faced the group's cruel sentence for a crime he never committed.

"My friends suggested stopping people on motorcycles and stealing from them, but I tried to stop them. They did not listen to me," Farooq told DW from a hospital bed.

"My friends stopped three people who were traveling on motorcycles, tied their hands and eyes and took the bikes with them," he added, claiming he did not accompany his friends during the theft.

Farooq said that he untied the victims and offered help. But the men instead turned to the Taliban for help, something an increasing number of people do in rural areas of Afghanistan where the government does not have a strong presence and cannot ensure the rule of law.

In these areas, the Taliban run a parallel justice system that more and more Afghans are turning to.

In Farooq's case, Taliban members were unable to capture his friends as they had already fled the area. Taliban members detained him as the only suspect in the case. Farooq spent over 70 days in Taliban captivity, holding on to the hope that his family would be able to forge a deal with the militants for his freedom.

"We tried everything during this period. We sent tribal elders to the Taliban and asked for his freedom but they never released him," the young man's older brother told DW.

The Taliban militants finally held a hearing and found Farooq guilty. The so-called court ordered that his hand and foot be cut off in public and before his brother's eyes. The Taliban carry out sentences in public to make an example out of their victims. The rulings are based on an interpretation of Islamic Sharia law.

"After the hearing I was given an injection. Later a man came and took my hand and foot from me," Farooq said from a hospital bed in Herat province where he is currently recovering. His condition is not life-threatening, his doctor said. 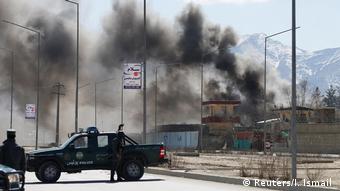 The site of a recent Taliban attack in Kabul

The latest incident is just another example of Afghans going to the Taliban for help instead of the government in areas under the militant group's control. One reason, experts say, is the high level of corruption in the Afghan judiciary system. Government courts also take much longer to deliver a sentence due to a high number of pending cases.

Although the international community has spent millions of dollars to strengthen the judicial system in Afghanistan over the past decade, analysts say the system remains inefficient and corrupt.

The Taliban's growing control over remote areas in Afghanistan makes it nearly impossible for the government in Kabul to run courts in districts like Obe where the Taliban have a strong presence. Local residents therefore have no other option but to ask the Taliban for help in many cases.

Asking a Taliban court for help, however, comes with a price. Their rulings are mostly final with no chance for appeal and sentences are carried out on the spot and in public. Suspects of adultery, stealing or spying can lose body parts, or even their lives, if convicted by a Taliban court.

However, other cases could have less drastic outcomes. Mohammad Dawood, a resident of Chanjer village in Helmand province had a different experience with the Taliban's parallel judiciary system, when he was dragged by one of his relatives to a Taliban court over a land dispute.

"There were a number of Taliban members who listened to both of us," Dawood told DW. "We were given a fair chance to tell them our side of the story. After that they made their ruling."

"We did not appeal the ruling as both of us had willingly agreed to appear in their court," he said, adding that the Taliban were fast and fair in their rulings, and that people did not have to bribe judges.

"In the mainstream judicial system, people face many problems - they have to spend a lot of money and wait years for a verdict," 48-year-old Dawood said.

While a Taliban court may have ended Dawood's long dispute over land, for Farooq and many others, they have brought life-long suffering. And both experts and activists are calling on the Afghan government to ensure rule of law across Afghanistan and protect the rights of its citizens.