The day Hans-Dietrich Genscher gave the world goose bumps | Germany | News and in-depth reporting from Berlin and beyond | DW | 30.09.2014

Poor lighting, bad sound, a half-finished sentence: Hans-Dietrich Genscher's balcony speech in Prague lasted only seconds, but it was an emotional Big Bang that culminated in the fall of the Berlin Wall. 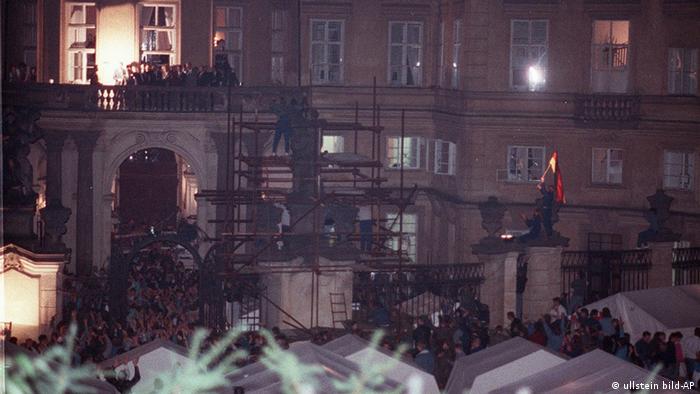 Summer 1989. East Germans began turning their backs on their state, seeking protection at the West German embassies in Hungary, Poland, Czechoslovakia, and in the West German Permanent Mission in East Berlin. At first, they were just a few, but soon, they numbered hundreds and eventually thousands all trying to gain entry to West Germany.

In the eyes of the West Germans, their actions were legitimate, since according to the country's Basic Law, they were all Germans. At the time, the Socialist Worker's Party ruled Hungary, and the country was bankrupt. The government in Budapest was in the throes of change, and as a result, there were only half-hearted attempts to guard the border between Hungary and Austria.

On September 11, 1989, tens of thousands of East Germans pulled back the once impenetrable Iron Curtain. Hungary's border guards did little to stop the flow of people. Erich Honecker and his government in East Germany were appalled, as were officials in Prague, who also regarded the embassy occupations as illegal.

But consensus within the Soviet empire was starting to crumble. In the late summer of 1989, no one could have known how far-reaching the consequences of the protests would be. No one, that is, except Hans-Dietrich Genscher, the West German Foreign Minister.

The UN General Assembly proved an ideal opportunity for the West German foreign minister and his counterparts from the Soviet Union, East Germany and Czechoslovakia to discuss the increasingly dramatic situation at the embassies. On September 8, 117 East German citizens were persuaded to leave the West German Permanent Mission in East Berlin. Exit papers were not part of the deal, just immunity from punishment and a return to their jobs.

From that point on, the Permanent Mission remained closed, with the result that pressure on the embassies in Warsaw, Budapest and Prague increased. Officials in East Germany expected West German Chancellor Helmut Kohl's government to close those embassies in order to send a signal to all potential refugees.

But Genscher, in his role as foreign minister and responsible for embassies, categorically refused. Instead, he ordered embassy staff to open their doors to East Germans. Meanwhile, thousands more descended on the three West German embassies.

On September 27, 1989, a Wednesday, Genscher ate dinner with his East German counterpart, Oskar Fischer. He made two suggestions: East German officials could hand out exit visas and stamp passports at the embassies. Or, East Germans could be taken to the West in trains crossing through East German territory. Fischer wanted time to discuss the options with Honecker over the weekend. For Genscher, that was too late. 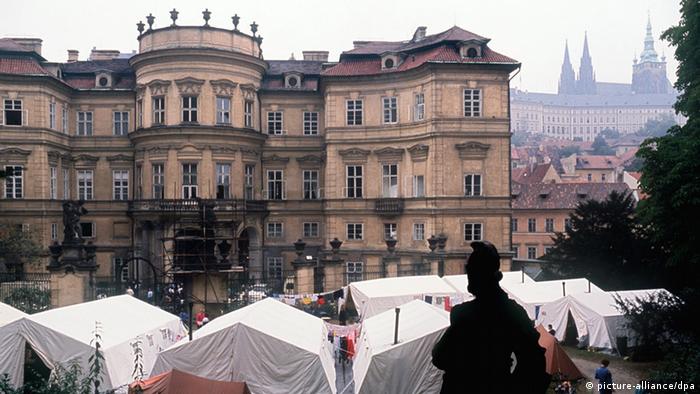 A day later, Genscher and Fischer spoke on the phone. Conditions at the embassies - particularly at the embassy in Prague - were steadily deteriorating. Fischer promised to pass Genscher's suggestions on to the government in East Berlin. Genscher also sought support from Czech Foreign Minister Jaromir Johanes, but he remained non-committal.

In the afternoon, Genscher requested a personal meeting with Soviet Foreign Minister Eduard Shevardnadze. Genscher was told to go to the Soviet consulate, but he didn't have a car at his disposal. In the end, he was driven to the embassy in a New York City police car, complete with sirens and flashing blue lights. Once there, he told Shevardnadze about the chaotic conditions at the occupied embassies. Shevardnadze asked if children were also involved, to which Genscher answered, "Many." Shevardnadze promised to help them.

That same evening, Genscher secured the support of US Secretary of State James Baker and French Foreign Minister Roland Dumas.

Genscher was on his way to the airport when he got a call on from Fischer's office. There was important information waiting for him at the East German Permanent Mission in Bonn for him, the caller said, adding that "it is always worth talking to him."

At the Chancellor's office in Bonn, Genscher and West German Interior Minister Rudolf Seiters learned that East Berlin had decided for the second option: allowing East German citizens eager to flee their country passage by train. Genscher pressed ahead with a further demand for prominent people to accompany the transport as a means of building trust among East German citizens.

"The refugees don't trust you," he told East Berlin's permanent representative in Bonn, Horst Neubauer. Genscher and Seiters suggested accompanying the transport themselves. East Berlin's man in Bonn took it to his government, and a short while later, permission was granted.

Shortly before Genscher and Seiter were due to depart for Prague, Neubauer got in touch to say that East Berlin had withdrawn permission for the two men to travel with the East German refugees. Tensions began to rise.

Having arrived at the West German embassy in Prague, Genscher once again contacted Neubauer. East Berlin was standing firm: only two German officials per train were to be permitted.

At 6:58 p.m., Genscher appeared on the balcony of the West German embassy and uttered what is probably the most famous half-sentence in recent German history: "Dear fellow Germans, we have come to you in order to inform you that today, your departure…" The rest was drowned out amid the cheers that erupted.

At 7:30 p.m., the first people left the Lobkowicz Palace. Three minutes earlier, the East German state news agency broadcast a statement from the foreign ministry in East Berlin. For humanitarian reasons, the government had decided to expel the people illegally occupying the embassies of West Germany. 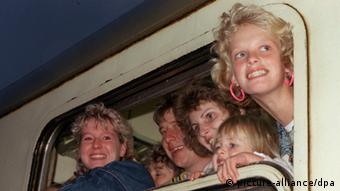 At 6:14 a.m., the first 1,200 East Germans - among them, many children - arrived on platform 8 of the train station in Hof. A total of around 6,000 people arrived in Hof that day, all of them without passports. East German officials had confiscated them on the train. They were met by huge crowds of helpers and journalists.

A few thousand East Germans chose to vote with their feet and show their state which way the tide was turning. Six weeks later, the Berlin Wall fell.

"Those few hours at the German embassy in Prague were some of the most moving I've ever experienced," said Hans-Dietrich Genscher looking back. “We all had goose bumps."

Toward the end of the 1980s, thousands of young Germans took to the streets - in the West for the environment, in the East for freedom. And then it happened: the fall of the Berlin Wall. But with euphoria came new fears. (21.06.2014)

Willy Brandt: 'Now what belongs together will grow together'

One city, divided in half - and a statesman, who finds the fitting words. Willy Brandt was a gifted orator. His best known quote however originated in an interview. (13.12.2012)