Willy Brandt: ′Now what belongs together will grow together′ | Culture | Arts, music and lifestyle reporting from Germany | DW | 13.12.2012

Willy Brandt: 'Now what belongs together will grow together'

One city, divided in half - and a statesman, who finds the fitting words. Willy Brandt was a gifted orator. His best known quote however originated in an interview. 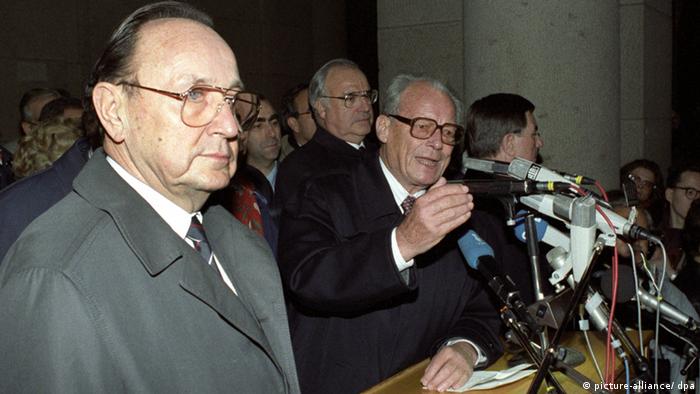 Berlin has inspired many a legendary quote. During the Soviet Blockade of 1948, Ernst Reuter - then a city councilor responsible for transportation and supply operations in the war-town city - made his stirring appeal to the Allied powers: “People of the world …. look upon this city! You cannot, you must not, forsake us!" Even more famously, two years after the Berlin Wall was built to divide the city in 1961, US President John F. Kennedy expressed his country's solidarity with the memorable statement "Ich bin ein Berliner!"
His words were welcomed by Willy Brandt, who was Berlin's mayor at the time. When the Wall fell in November 1989, he himself made history with a remark whose true significance only sunk in later.

Berlin, a place that makes history 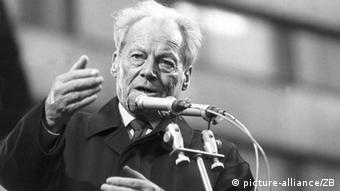 "Now what belongs together will grow together", said Brandt, who had gone on to serve as German Chancellor between 1969 and 1974. As simple a statement as it was, this heartfelt comment captured the emotional turmoil of the fall of '89. Spoken at the city hall in Schöneberg, the same place where J.F.K had stood 26 years earlier, the words were understated in comparison to the electrifying impact of Kennedy's declaration, but no less poignant. At the time, German division was by no means over and the future of both East and West Germany still hung in the balance. There was talk of a reformed brand of socialism or even a confederation of the two Germanies. But without being zealous, what Brandt evoked was a unified nation that would evolve organically.

In fact, Brandt never said it - at least not there on that balcony of the Schöneberg city hall, where he appeared with Chancellor Helmut Kohl and Foreign Minister Hans-Dietrich Genscher. Speaking to a tearful crowd and almost drowned out by cries of "Willy, Willy," the former chancellor and honorary SPD chairman actually talked about Europe, not Germany, growing together - and in significantly vaguer terms. Only later - long after the statement had become one of the key tenets of the reunification process - did historians revisit the famous speech and establish that Brandt had been misquoted. Nor does the quote appear in his memoirs. The words were actually uttered in off-the-cuff newspaper interviews that took place either before or after the speech and only later attracted attention. At the time, editors failed to appreciate their import and opted to lead with other, more general quotes from the balcony speech. 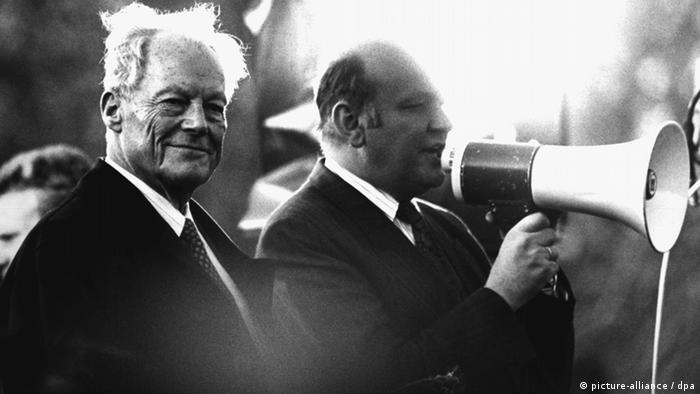 Brandt's assertion was first picked up weeks later on by a Social Democrat regional publication with a print run of just 6000. His bon mots were then seized upon and turned into the motto of the SPD party conference in Berlin that December.

Brandt as a visionary

Willy Brandt was a famously gifted orator. "I did not learn to speak, I simply could," he once said when asked about his rhetorical skills. Variations on this particular quote had found their way into his speeches long before 1989. In 1958, while he was still serving as mayor of West Berlin, he spoke at the inauguration of an extension to the underground system and said "one day, that which belongs together will be joined." Six years later, speaking at the third anniversary of the building of the Berlin Wall, he echoed his own words: "Germany must be reunified so that what belongs together can be joined together." It was a pointed remark, given that he and his party were often accused by the opposition of being resigned to German division as an intractable reality. In his memoirs, Brandt did indeed say that the hope of reunification was in many ways a sustained delusion. 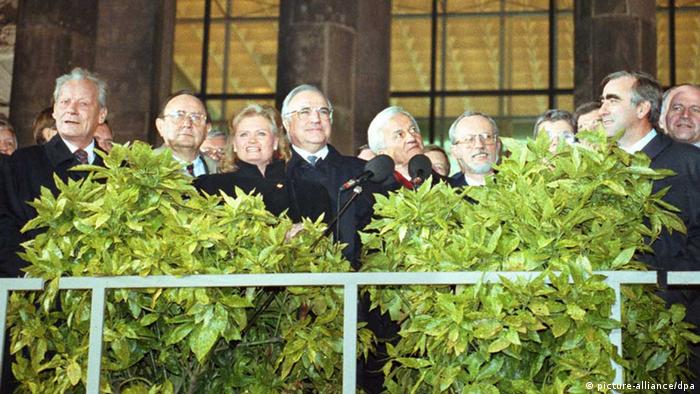 Germany celebrated being united once again on 3 Oct. 1990. Along with former Chancellor Willy Brandt, Chancellor Helmut Kohl and his wife Hanelore

Willy Brandt was no longer active in politics when the unthinkable came to pass and the Berlin Wall finally fell. The SPD was glad to have him in its ranks. Many in the party had their reservations about the peaceful revolution in communist East Germany. Influential Social Democrats were keen to see a reformed East German state but continued division. Brandt's position was less ambivalent. The public was moved by his statement because it pinpointed the unnatural-ness of the two Germanies but also expressed patience and humility. Interestingly enough, his erstwhile political opponents showed him the same recognition of the role he played in German reunification as his own party. Although neither his politics nor his biography had anything in common with then Chancellor Helmut Kohl's, the two statesmen were never closer than they were in 1989.

After the First World War, Germany enjoyed just over 20 years of peace before the Second World War erupted. Writer Kurt Tucholsky was one of the first to predict the impending disaster. (19.11.2012)