The dangers of app-based delivery work | Business | Economy and finance news from a German perspective | DW | 22.05.2022

The dangers of app-based delivery work 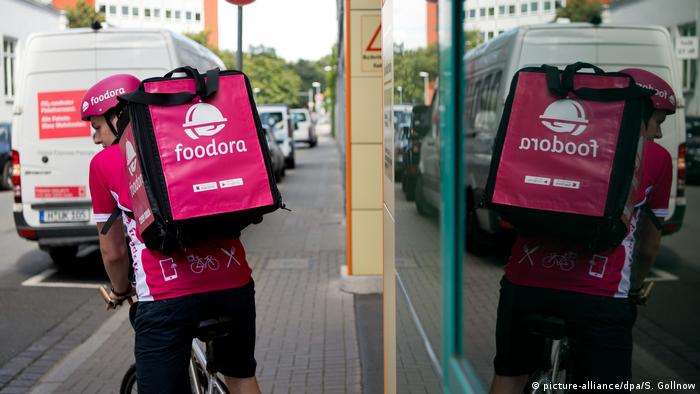 There's no lack of delivery startups across Germany. Many employees are unhappy with their working conditions

The delivery service business gained popularity in Berlin a little over a decade ago, when firms like Berlin-based Lieferheld introduced platforms for customers to order meals from restaurants, with restaurant employees completing the deliveries.

Starting around 2013, this model was effectively replaced by online and app-based services that hired their own delivery workers. This allowed customers to order from restaurants that didn't employ their own delivery staff, and simultaneously created thousands of delivery jobs that offered flexible schedules and required very little training.

Now the delivery business market is expanding beyond food and grocery services. German-based Mayd (Meds at your door), began delivering medications to private homes last year and has already expanded to 25 German cities and hired 900 workers.

"We will be active all over Germany by the end of the year," said Hanno Heintzenberg, co-founder of Mayd, adding that the company also has plans to expand into Austria and France.

Another company, called Dropp, is using a similar model to deliver e-commerce products to customers in Berlin.

A common argument made in defense of app-based delivery startups is that they create jobs. Asked for comment about a number of employee issues, a spokesperson for Gorillas, a Berlin-based grocery delivery service, was quick to point out that since 2020 Gorillas has hired 15,000 people.

Today, there are tens of thousands of delivery workers in Berlin. These work opportunities, with flexible schedules and no German language requirement, do provide income for many of Germany's foreign students. However, numerous reports about work-related injuries, missing pay and union busting suggest that the jobs created by delivery companies may be exploitative.

Not the least of delivery workers' concerns is the risk of serious injury or death. Surveys of bicycle delivery workers regularly find that about half of them experience a serious traffic-related injury each year.

Beside the risk of traffic accidents, many delivery cyclists report musculoskeletal injuries that result from carrying heavy loads on their backs over time.

In Germany, delivery workers are considered dependent if they work for one company and use the company's equipment. For most, simply needing to use their company's app for work qualifies them as dependent workers.

"That comes with certain rights, including the national minimum wage, health insurance, etc.," said Johannes Kiess, deputy director of the Else-Frenkel-Brunswik Institute for Democracy Research at the University of Leipzig.

However, delivery workers in Germany still face many issues that are common to gig work.

"Yes, these workers are being exploited with relatively low wages," said Kiess. "They are treated as expendable. These are 'jobs' in a narrow sense of the word, rather than regular employment."

'A serious lack of investment'

Gorillas provided this statement about payroll issues: "As in large companies with many employees…there may be occasional payroll errors in individual cases…At present, around one 1% to 4% of payrolls are affected by errors, which we strive to correct in a timely manner."

However, a former Gorillas people operations manager, who wishes to remain anonymous to protect contacts still working for the company, said Gorillas' HR team has been severely understaffed since he started there a year ago.

His team received an average of 900 complaints about missed payments each month. About half of these were company errors, he estimated, mostly the result of an archaic system for keeping track of sick leave and vacation days.

"There's a serious lack of investment," said the former manager. "When you have 10,000 people in a company, you cannot pay people out of an Excel sheet."

He had proposed implementing an SAP payroll system to fix the payment issues, but Gorillas didn't want to cover the cost. They did, however, recently pay to launch an in-house record label, he noted. 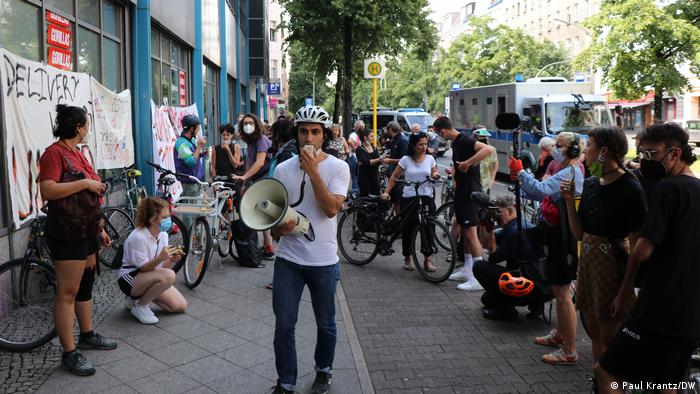 Miguel Judez is a 27-year-old biotechnologist from Spain who has lived in Berlin for six months. He is close to finishing a master's degree in science communication, and also studies German at a language school. He began delivering for Flink, a grocery delivery app, in December.

"It's better than expected," Judez said about his work experience so far. "My bosses are all good people, and I get lots of free food."

However, delivery companies that are initially viewed positively by employees have a tendency to become more exploitative over time, as investment funds begin to run thin and they look for ways to become profitable.

Judez has already noticed subtle changes within Flink's organization. Originally, he could block out his work availability around his class schedule. Then the system changed, and now he can only set "notices of interest" for times he would prefer to work. This subtle change inevitably results in workers being scheduled when they are not available, which could lead to absences and terminations.

In the investment-fueled startup world, promising companies win hundreds of millions in investments. Gorillas made business news for securing $1 billion (€960,000,000) in investment funding in its first year. Mayd had received €43 million by January of this year.

But these young and still growing companies also have a lot of costs. After subsidizing discounted deliveries for new customers, paying rent for more and more warehouse spaces as they expand coverage areas and paying thousands of workers' wages, eventually these investments begin to dry up — and companies need to turn profits.

"After a period of intensive growth, Gorillas' focus has shifted to building a strong and profitable business," said a statement provided by the company. "More than 25 of our microfulfillment centers are already operating profitably."

However, employees who can't afford rent while they wait for missing pay, or heal from injuries, would argue that profitability comes at the expense of their quality of life. Whether a company can offer delivery service at prices that customers will pay, and also support employees with livable wage and benefits, remains to be seen.